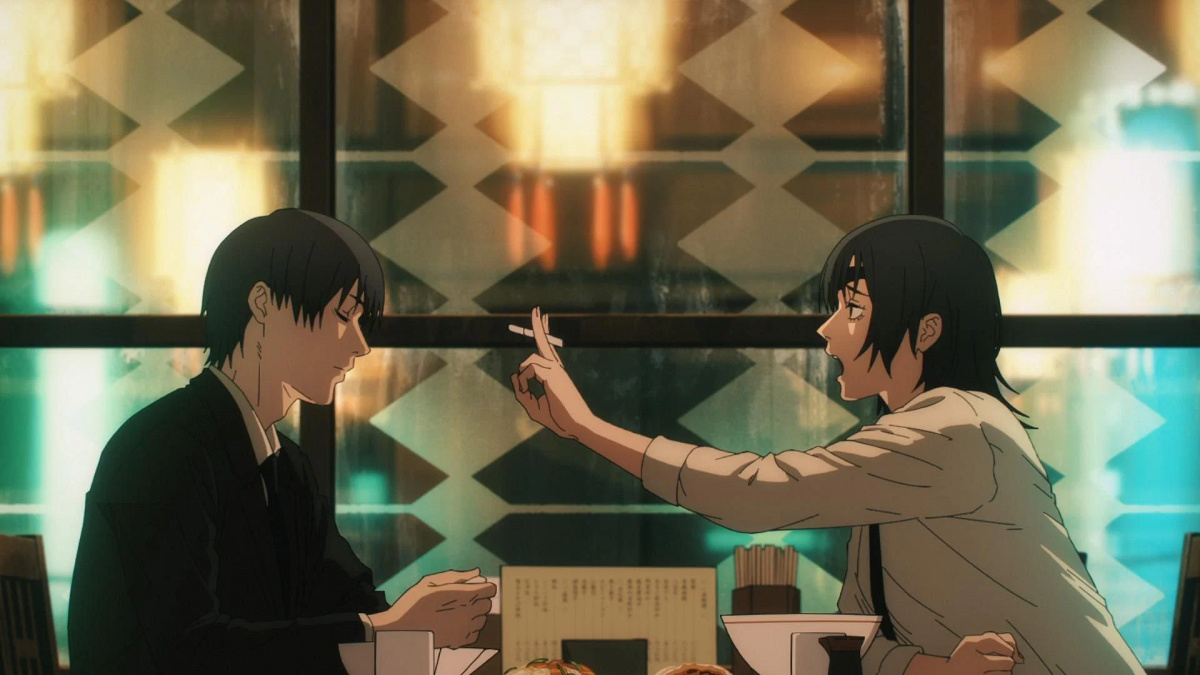 Screenshot by Twinfinite via MAPPA

Late last week, we unveiled our list of the top 10 waifus from 2022. It featured the very best queens that anime had on offer, from midnight assassins to leporid heroines, and we are confident it brought unbridled joy to at least one person out there, statistically speaking.

But I know what you’re thinking. Where are the men? Those dashing lads, capable of melting your heart with a single smirk before stealing away into the misty morning dew? Worry not, thirsty one, because we’re back at it again, this time with a top 10 list that simply oozes machismo. For your viewing delight, these are the boys who put the “ohhhhh” in husbando.

As before, our rankings are limited to only one entrant per anime.

For those of you eager to have their daddy complex catered to, we start off hot by going full granddaddy with a man who has loyally served his people for thousands of years. He’s not just a silver fox, he’s a platinum kitsune, baby.

Wizened as he may be, Yamamoto will still mess you up twenty ways from Sunday, having hardly lost a step over a lengthy career of badassery. To underestimate him is to meet a swift and brutal death, and not coincidentally, this makes him our preferred protector from oncoming threats.

Choosing him as your husbando probably won’t result in a lot of picnics or baked goods — a man who has seen so many birthdays surely does not have time to remember yours — and yet, watching him mow down hordes of enemies is enough to light a spark of passion in even the timidest of temperaments. He also gets bonus points for that gravelly old man voice, yes indeed.

Trying to compare to the valiant, lionhearted Flame Hashira, Kyojuro Rengoku, is no small feat. After our souls were laid bare in the events of the Mugen Train scuffle, we desperately sought a new mentor who could reassemble our fractured psyche.

We just needed a little bit of coddling, but instead, we received a flamboyant, muscular man with no sense of decency at all. Tengen Uzui is the very embodiment of noisy excess, which should really come as no surprise considering he is the Sound Hashira and all. He probably could have also qualified as the Arrogance Hashira or the Protein Powder Hashira.

As off-putting as his personality might be to some, once he enters a battle, he is all business, dishing out some truly spectacular techniques that leave his opponents reeling. Additionally, he has a harem of three wives, so he must offer something worthwhile to keep them around. He does have very nice hair, admittedly.

If mentorship from Yamamoto or Tengen didn’t catch your fancy, perhaps you’d elect to strike up a conversation with this hulking veteran instead? Maine is a proponent of the ‘tough but fair’ style of leadership, teetering somewhere between assertive and crazed as he throws himself headlong into the fray.

Despite his relationship with Dorio, we cannot assure you that a romance with Maine will be anything less than traumatic, as he gradually loses himself to the rigors of being a cyberpunk. Could your affection be just what he needs to return to a humble life of domestication?

It’s quite unlikely, but the visual of Maine doing household chores is enough to make it worth trying. We are inclined to believe he is less than adept at dusting, though we would have to see it first-hand before being able to make a final call.

Upon first meeting the reserved Hyoma Chigiri as part of Team Z, you may be excused for wondering why exactly he qualified as one of the hottest soccer talents in the nation.

He keeps to himself for the most part, brooding quietly in the corner and refusing to divulge in his strengths. Once he has been sufficiently motivated, however, he unshackles himself from all fear and doubt, blitzing down the pitch at a breakneck speed.

Just by running fast for a few seconds, he has already surpassed Igarashi, making a beeline directly for our hearts. He’s pretty and non-threatening, and I like that in a man. If you’re not sold quite yet, his Japanese voice actor, Souma Saitou, was also the one who brought Skull-face Bookseller Honda-san to life — commendable and powerful!!

David Lauren once said of his father Ralph’s fashion empire that it’s “not about fabric; it’s about dreams.”

Wakana Gojou is a talented young man who understands this mindset, deftly working behind the scenes to make Marin Kitagawa’s visions become reality. His eye for detail and meticulous craftsmanship allows him to create some truly wonderful works of art, morphing Marin from an everyday high schooler to a magical girl, succubus, and more. No, it’s not weird; stop looking at me like that.

Gojou is just a calming figure to have around in general, supportive and wise beyond his years. He’s quite versatile in his artisan work, having crafted Hina dolls from a young age. Seeking a stand-up guy or some talented fingers? Get you a man who can do both.

Look, they’re not all going to be Gojous. Sometimes you want a sweetheart to hold your hand and tell you everything’s going to be ok. Other times, you want a maniac who will burn your hand to a crisp and snarl that nothing will ever be ok. I’m not here to kink-shame.

Ever since his debut in season 2 of My Hero Academia, Dabi has given the impression that he knows more than he’s letting on. His powerful flames could rival the destructive force of Shigaraki himself, and yet, this sinister foe defers for the most part, content to remain on par with bumbling colleagues like Twice and Mr. Compress.

In the latest arc, all of his intentions were made clear, and Dabi dropped a bombshell that left the Hero community reeling. He also revealed that he’s a fabulous dancer, which is an important quality to have in a husbando. If we were writing a sleazy magazine article (instead of a sleazy website article), we would surmise that this bad boy was hot stuff in 2022.

Though Agent Twilight wasn’t able to complete his mission of claiming a spot on the podium, he’ll be one to keep an eye on moving forward. The man known as Loid Forger is strikingly handsome, carrying an air of mystery that is surpassed only by his genius-level intellect.

He will enter any situation fully prepared for every possible outcome, whether it is a daring act of espionage or a brunch with work colleagues. Truly, the main reason he didn’t rank higher on this list of husbandos comes down to the knowledge that his whole demeanor is a front.

Yes, the sad truth is that Loid will probably love you and leave you, disappearing from your life without so much as a farewell note. Is it worth the eventual heartbreak for a few fleeting moments of thrill? That really depends on your disposition, though frankly, if you survived a date with Dabi, falling in love with Loid is comparatively risk-free.

Alright, we’re cheating a little bit on this one! 2022 was an entire agonizing year between Jujutsu Kaisen seasons, however, its first feature film, Jujutsu Kaisen 0, saw a western release in March. As such, Gojo-sensei makes the cut through technicality. You’re probably not complaining anyway, but we wanted to explain our tomfoolery.

Though the movie’s version of Gojo was yet to establish his fabulous partnership with Yuji Itadori, he was every bit the carefree, irreverent goofball we know and love. We were able to get further insight on his past — in particular, his rivalry with Getou — and saw him take Yuuta Okkotsu under his wing.

The fact of the matter is Jujutsu Kaisen’s cast steals the show in any medium, so even less than two hours of Gojo was enough for him to climb up the rankings. We are so damned ready for season 2 to blow us away with all the devastating force of Hollow Purple; we can’t touch Gojo directly, but we just know he’ll touch our hearts all the same.

The aloof Mr. Top-knot was able to walk a fine line in Chainsaw Man, visibly unyielding for the most part while also showing that he had a heart of gold underneath that cold veneer.

Aki is as business-like a protagonist as you will see in anime, calling out orders and setting about any task with calculated responsibility. His tragic upbringing has rendered his self-care obsolete, and in this way, crossing paths with Denji and Power was perhaps exactly what he needed to heal his frayed nerves.

Alas, as far as availability for husbando duties goes, you’d best quit while you’re ahead. Aki is all about the job, carrying a laser focus set squarely on slaying the Gun Devil. Your best bet is to make a contract with some form of Love Devil, bewitching him with your charms at the cost of… a lung or something equally as devastating.

If you polled ten people on whether Arataka Reigen would come out of this contest as the #1 husbando, you’d probably only receive one vote (from Reigen himself, wearing a clever disguise).

Digging a little bit deeper into this bumbling braggart reveals a genuinely good man who uses his gift for the gab as a means of compensating for his own shortcomings. He’s also quite fond of money, and swindling gullible customers is a great way of lining his pockets with yen. It doesn’t hurt to be enterprising, after all.

Although Reigen’s relationship with Mob as his psychic guide and spiritual teacher has always been rooted in deception, when all seems lost, he is the only one up to the challenge of setting things right. The true mark of a husbando isn’t necessarily someone who fights battles because they expect to win but a man who fights them merely because they need to be fought.

With all that being said, I could easily be swayed to award the top spot to God Dimple’s dummy thicc cheeks. I’m not a proud man, just one who appreciates a golden booty.