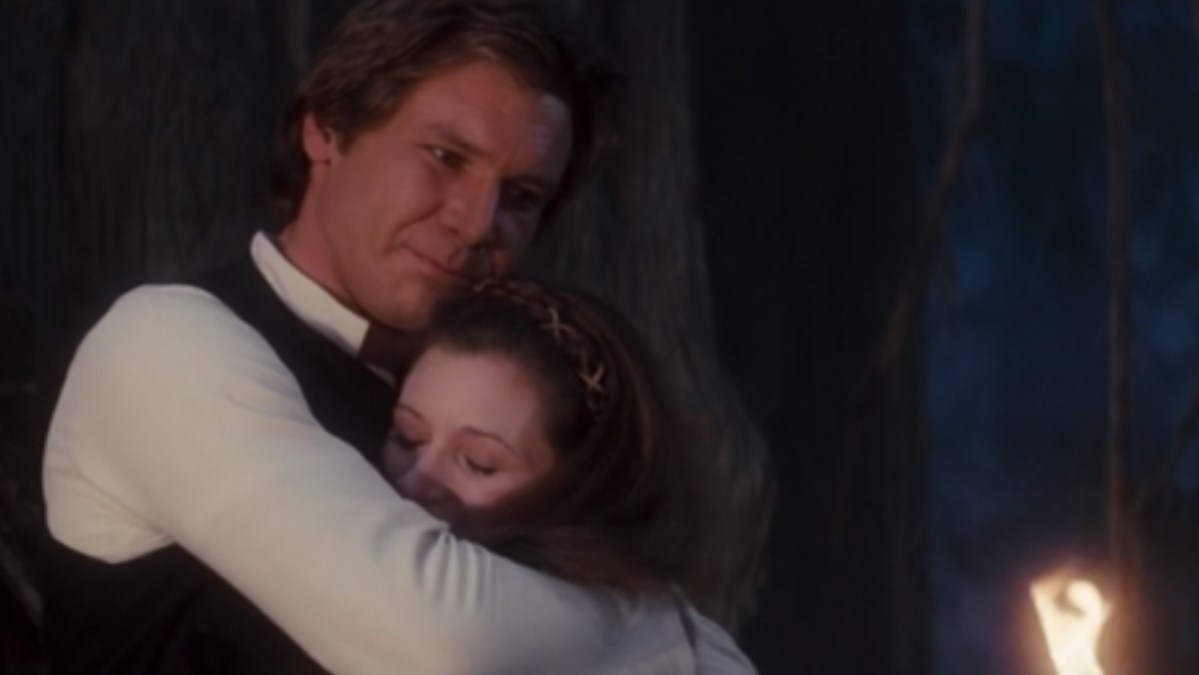 Star Wars is often defined by its romances, whether it be Anakin’s feelings for Padme leading to his fall to the Sith or Leia and Han Solo’s rocky relationship that sets the stage for the sequel trilogy. Despite this Star Wars movies are somewhat lacking in romances. If this were a list of romances from the Star Wars movies themselves, we’d have very little to work with. However, if you look into the wider Star Wars universe, especially the Legends canon, then you can find a lot of romance in Star Wars. Here are our top 10 best couples in a Galaxy Far, Far Away.

The two parents of Leia Organa, Bail and Breha represent a much less complicated form of romance than the previous two entries, and a surprisingly wholesome marriage given that the two of them live, arguably, in the darkest times of the galaxy during the reign of the Empire. Bail and Breha decided to adopt Leia after Order 66 as part of Yoda and Obi-Wan’s plan to protect the two children. They both had been trying for children and decided to become adoptive parents to Leia. While their roles are small, their appearances in Obi-Wan showed them as very loving parents to Leia.

The sad note that makes this a somewhat bittersweet entry is that they were both killed with the destruction of Alderan. Many Romances in Star Wars end in tragedy, unfortunately, but at least the Organas helped raised a future leader of the Rebellion.

Anakin and Obi-Wan aren’t the only Jedi to have dabbled in romance. Aayla Secura and Kit Fisto have some history together. Though there isn’t very much material about their romance, we do see the two of them share a kiss in a comic and there’s a lot of innuendo and implication in their flirty banter afterward. Though the kiss itself could be explained away by the fact that Kit Fisto was trying to save Secura from drowning, there are other Jedi who had casual romances within and outside the Jedi order, with Rael Averross being an example. Those romances have often been justified within the Jedi code because they represented very limited emotional attachment. This seems to be the case here, with the two of them not showing much in the way of a relationship besides this brief moment.

This romance is also nonexistent in the current Disney canon, being part of the old canon that’s now called Legends. Despite this, it’s one of the few notable romances between two nonhuman named characters in star wars.

As showcased in the Movie Solo, the relationship between Han Solo and Qi’ra is rocky, to say the least. The two grew up together on the hard streets of Corellia and almost both escaped from the planet, though only Solo would leave Corellia. The two met again and Han felt he could rekindle that flame, but she ended up manipulating him so that she could end up in a better position within the Crimson Dawn by the end of the movie.

Their romance is part of the much-maligned Solo movie, unfortunately, but has been developed slightly since by other canon comics. Their early romance is important in the canon timeline to understand how Han Solo went from being somewhat naive and trusting to being cynical and selfish.

Both introduced in the Star Wars: Fallen Order video game, Cal Kestis, and Merrin represent one of the rare Dark Side and Light Side romantic pairings in Star Wars. Though the romance made up a very small part of the overall game, not really to the point where either side can admit any possible feelings, a pairing between a Darthomir Night Sister and a Jedi Padawan refugee is intriguing. It’s possible this might be explored more in the future Jedi: Survivor game, though it’s also possible the two may not bloom their relationship into a romance.

There are a couple of other Light Side and Dark Side romantic pairings in the fiction, though most of them are in Legends, and in general one of the two falls to the Dark Side after the relationship starts. It’s interesting to see a pairing between a Dark Side force user and a Light Side force user that’s mostly amicable, a rarity in Star Wars cannon.

Dr Aphra is a character from the acclaimed Marvel Darth Vader comic series who got her own spin-off series. She’s an archeologist who ends up working for Vader, though more as an opportunistic rogue than a die-hard Empire supporter. She ends up in a romance with Magna Tolvan, an imperial officer. They have a complicated relationship, especially as the two end up betraying the Empire. Tolvan joins the Rebel Alliance and Aphra ends up stabbing Vader in the back in order to protect her and the others she cares for.

Aphra and Tolvan are also a lesbian couple and an example of the scarce LGBTQ+ representation in the Star Wars universe. Apart from the recently teased couple in Star Wars Andor, this is perhaps the only example of a somewhat prominent queer couple in Star Wars. Though there are some indications that may change with the introduction of Cinta and Vel in Andor, those two’s onscreen romance has yet to be more than hinted at.

This relationship exists almost entirely within Legends canon, though some still hold out hope that Mara Jade may one day make a debut in the new canon. Mara Jade was an Emperor’s Hand, a covert agent of Palpatine himself. Mara worked as Darth Sideous’s assassin, but after the fall of the Empire she struck out on her own. She would meet Luke Skywalker soon afterward and slowly fall in love with him, eventually marrying him. Mara would eventually die, though Luke did not go down the same pitfalls of despair as his father Anakin when she did.

It is interesting to consider what may have happened if this storyline was adapted in the Disney sequel canon. The new canon is rather quiet on whether or not Luke had a love life after the fall of the Empire and nothing in the new canon nessecarily contradicts the potential existence of Mara Jade.

Another Legacy only romance, and another that ends tragically. You may not recognize the two characters named, but they were both important and defining figures in the Old Republic timeline. Both Jedi formed a romance back when Jedi attachment wasn’t so stigmatized. Unfortunately, Ulic ends up turning to the Dark Side under the tutelage of Exar Kun and only stops his own evil after he kills his own brother, Cay Qel-Droma, and Nomi takes away his ability to use the force. He then runs off into a self-imposed, guilt-ridden exile.

Ulic would get a chance to meet Nomi again and a measure of redemption when he teaches her daughter Vima Sunrider. He is then unfortunately killed by a blaster shot to the back. It is also interesting to note that Ulic and Nomi technically exist in Disney canon, as the Qel-Droma epics highlighted by the Star Wars Force and Destiny TTRPG books are a semi-historical semi-mythical recounting of their story.

Another one of the tragic pairings of Star Wars, Hera and Kanan were both part of Ghost Team and in Rebels season 4 the two of them ended up sharing a brief romance before Kanan was killed sacrificing himself in a battle against the Empire. Hera also ended up bearing Kanan’s child, named Jacen Syndulla, who may end up involved in post-Empire events if Star Wars ever fleshes out more of that part of the canon.

This one was a brief pairing, given Kanan’s death, but the two of them had a lot of chemistry earlier on in the series, and the two of them as a couple did work. During the earlier seasons, Kanan and Hera ended up being something like the ‘mother’ and ‘father’ of the unruly Ghost Team. Despite the lack of time the two of them had together as a couple, the unfortunate death of Kanan ended up underscoring the desperateness of the Rebel cause, and how much sacrifice went into defeating the Empire. In addition, it’s another example of a Jedi ending up developing a strong romantic attachment, which is against the Jedi code.

Obi-Wan’s relationship, or lack thereof, with Satine, is very important to key plot points of Clone Wars. Before Obi-Wan was a Jedi Master, he and Qui-Gon Jin both were tasked with protecting the young duchess on Mandalore for a time, and Obi-Wan and Satine ended up falling in love during their time together. Neither one acted on this feeling, as they both had a strong sense of duty to their respective factions, but Obi-Wan remarked that if Satine had asked he would have left the Jedi Order. Even more unfortunate for the two would-be lovers is the fact that Maul ended up killing Satine specifically to inflict emotional pain on Obi-Wan.

Obi-Wan and Satine are one of the great “what if” couples of Star Wars. They aren’t an active couple, but there’s a lot of speculation as to what may have happened if the two of them did end up together and Obi-Wan left the Jedi Order.

Han Solo and Leia’s romance is the most famous romance from the series, and perhaps its best. Like many romances in the series, it has an unhappy ending with Han Solo dying in the attack on Starkiller Base. Despite that, for many, the two’s growing romance through the movie is an indelible part of their nostalgia for the original trilogy. Their relationship has also been developed in supplementary canon material. The two even have a son in the form of Kylo Ren, though sadly he is the one responsible for his father’s death.

Han Solo and Leia Organa’s relationship also has a strange second life in the Legends canon. It’s one of those rare times when we get to see a pairing in Legends and Canon that takes things in different directions. The two end up having three children, Jaina, Jacen, and Anakin Solo. Though Jacen would turn to the Dark Side, like Kylo Ren, Jaina and Anakin both did not.