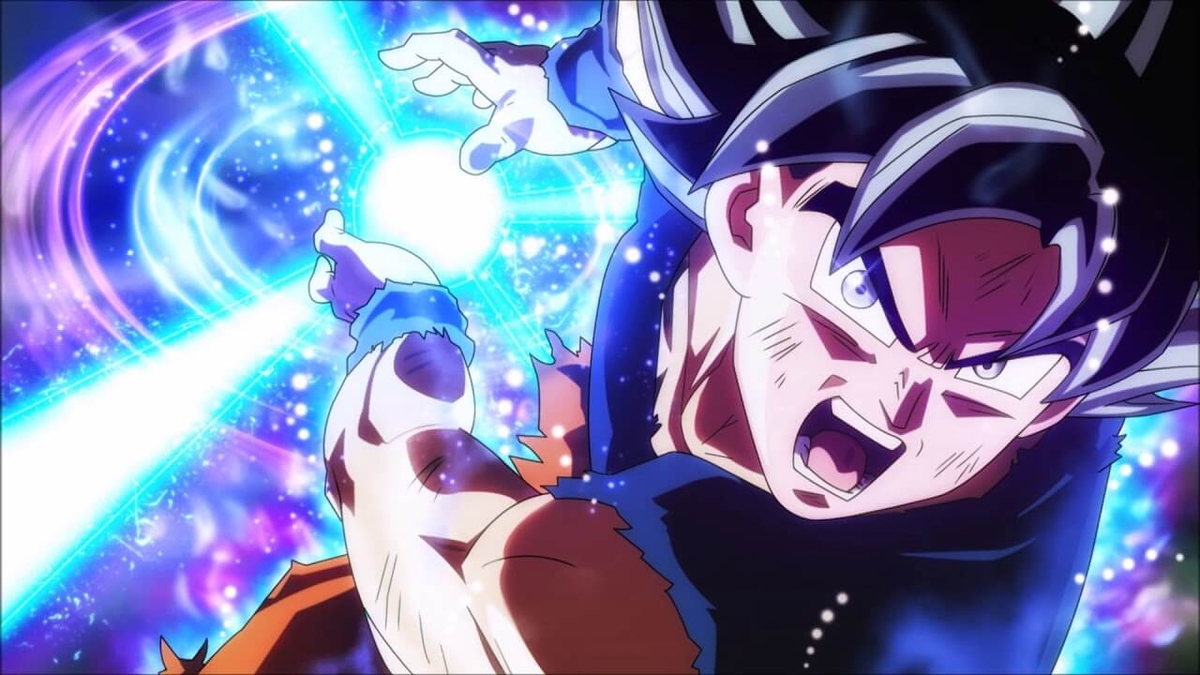 Everyone get down, take cover, and get moving because we’re about to hit you with our top 10 best Kamehameha waves in the Dragon Ball franchise.

The Kamehameha wave is synonymous with Dragon Ball as Goku’s signature move and usually plays a part in some of the most iconic moments in the series. At some point in our childhoods, we all tried to pull off the legendary move. You can check out our full list below spanning the entire Dragon Ball franchise from Goku’s humble beginnings as a student under Master Roshi to the devastating and god-like attacks featured in Dragon Ball Z and Dragon Ball Super.

The early chapters of Dragon Ball represent a simpler time for the franchise, before Saiyans, before Frieza, and before Beerus. The series largely focused on the adventures of Goku, Yamcha, and Bulma as they hunted the world for the seven Dragon Balls. Along the way, Goku became a student of the Turtle Hermit, Master Roshi, and trained alongside his rival and later best friend, Krillin.

Goku would first witnesses the Kamehameha after Master Roshi uses the technique to extinguish a fire at the Ox King’s castle. Goku immediately wants to learn the technique but is warned by Roshi that the technique takes 50 years to master. Not for our favorite Saiyan though. A technique that takes half a decade to master is picked up by Goku in seconds. While Goku’s first Kamehameha wave is modest compares to what comes later, it sets up Goku’s potential and foreshadows his status as a fighting genius in Dragon Ball Z and Super.

Dragon Ball Z‘s Saiyan Saga changed the game for the franchise and provided the Z Fighters with their first threat from beyond the stars. After they suffered a brutal onslaught from Vegeta’s partner Nappa, Goku arrives on the scene to save the day. Goku is able to make quick work of Nappa with his new Kaioken technique before taking the fight to Vegeta.

The two have a brutal struggle with Goku gaining a slight advantage over Vegeta. In desperation, Vegeta fires his Galick Gun in a frantic attempt to take out Goku along with the Earth. Faced with the possibility of Earth’s destruction Goku has to dig deep and push both his Kamehameha and Kaioken techniques to their absolute limit.

This exchange set a precedent for the over-the-top beam struggles and spectacle that Dragon Ball Z would become known for. This is the first instance of Goku overcoming his limits with the force of the Kamehameha being so powerful that there was significant recoil when he fired the blast, something that has rarely been seen since in the series.

Dragon Ball Super’s first 30 or so episodes are well known for all the wrong reasons due to the abhorrent standard of animation and for retreading old material that was previously seen in the Battle of Gods and Resurrection F. It was a rocky start for the series and something truly special was needed to turn it around.

The Universe 6 arc took the series into new territory and the multiverse for the very first time. Goku’s bout with Hit quickly established itself as a series classic and offers a throwback to Goku’s iconic beam struggle with Vegeta. Goku’s Kamehameha blast fully displays the destructive force of his new godly power combined with the fierce battle cries of the incomparable Sean Schemmel.

Broly: Second Coming is the ninth Dragon Ball Z movie and the sequel to Broly: The Legendary Super Saiyan. It’s widely considered to be one of the weakest Dragon Ball movies and is responsible for transforming Broly into the mindless brute he would later become known for.

One of the film’s few redeeming qualities is the family Kamehameha that is used to defeat Broly in the final battle. On the brink of defeat, Gohan and Goten are able to bring Goku back to life for a short time in order to fire a massive Kamehameha wave to annihilate Broly. While Broly: Second Coming is held in low regard amongst the Dragon Ball fandom, the image of Goku standing alongside his two sons is one that’s engraved in their minds.

This technique’s very present in Dragon Ball Super goes a long way in writing the series wrong and provides a healthy dose of fan service for longtime Dragon Ball fans.

The technique was only available to Vegito as an ultimate attack in video games before being animated for the first time in DBS’s Future Trunks arc. The animation showcases the full destructive force of the attack which crackles with electricity before it’s even fired, truly earning its title of the Final Kamehameha.

Dragon Ball Super’s Tournament of Power arc saw Goku completely pushed to the edge which resulted in him unlocking the Ultra Instinct form at a number of points in the tournament.

Goku exhausted his Super Saiyan Blue power completely against the mighty Kefla – the fusion of Universe 6 Saiyans, Kale, and Caulifla. Goku was able to tap into the mysterious power of Ultra Instinct and turn the tide of battle and completely overwhelm Kefla.

Ultra Instinct is a form that relies on a calm state of mind and autonomous movement to obtain complete battle mastery. This is portrayed perfectly when Goku -while in this form- is able to effortlessly dodge Kefla’s onslaught of attacks while charging his Kamehameha to full power before attacking with a point-blank blast. It’s arguably one of the franchise’s flashiest variations of the technique to date.

Dragon Ball fans generally view Dragon Ball GT with disdain due to the creative decisions that were made over the course of the series. As it stands, Dragon Ball GT isn’t considered canon, but fans have always viewed the Super Saiyan 4 transformation as a major silver lining for the series.

Not only does Goku’s look get a major overhaul from previous Super Saiyan transformations, he also gets an upgraded Kamehameha wave. In this form, Goku combines two spheres of energy into a massively powerful wave which can cause initial damage with a delayed follow up blast which is doubly as powerful to boot. The only thing missing is the change in color scheme from blue to red featured in the Budokai Tenkaichi games which showcases the vast increase in power.

The android saga is arguably considered to be the pinnacle of Dragon Ball for its storytelling, battles, and the introduction of Cell, one of the franchise’s most popular villains.

In the saga’s final act, Goku engages in a fierce bout with Cell in his Cell Games tournament. The two seemingly battle each other to a stalemate with neither fighter able to gain the advantage. In desperation, Goku appears to take a major gamble by launching his Kamehameha toward the Earth to take out Cell.

The scene is memorable for the sheer panic displayed by both the Z Fighters and Cell himself at the lengths Goku will go to. At the last second though, Goku uses his Instant Transmission technique to teleport in front of Cell and hit him with the full force of the blast at point-blank range.

This scene showed how lethal the Kamehameha wave can be as it completely obliterated Cell’s upper torso. It also showcased Goku’s status as a fighting genius, a far cry from his portrayal in recent years.

One of the greatest moments in Dragon Ball history. Dragon Ball Z was Gohan’s story and his final battle with Cell provided the ultimate payoff to his character arc.

Since the beginning of DBZ, it was teased that Gohan would be the one to eventually surpass Goku and become the hero of the series. Gohan finally lives up to his potential in a climatic Kamehameha beam struggle against Cell.

When it seems that Gohan is on the verge of losing his will to fight, the spirit of Goku returns to encourage his son to unleash his full power. With the support of a desperate assault from the Z Fighters, Gohan is able to completely overwhelm and obliterate Cell with his own one-handed Kamehameha. The image of Goku and Gohan firing the blast together is etched into the mind of every Dragon Ball fan.

Dragon Ball Super: Broly set a new standard for the franchise with its dazzling fight scenes, top-tier animation, and the reinvention of Broly.

The film’s final act sees Broly go into an uncontrollable rage following the death of his father, putting the Earth at risk. With no other option, Goku and Vegeta perform the fusion dance to create the massively powerful Gogeta who makes his first appearance in Dragon Ball canon.

Gogeta’s battle with Broly is considered to be one of the most vicious one-sided beatdowns in Dragon Ball history. The fused Saiyan is able to run circles around Broly in physical combat before bombarding him with blasts of increasing intensity and power.

In order to put Broly down for good, Gogeta decides to fire a full-power Kamehameha. What makes this one special is the animation. The ground physically shakes while Gogeta is surrounded by a striking aura with the killer look in his eyes signaling his intent. The blast is so impactful that its recoil is enough to send Gogeta back and while we never get to see it hit its target, this small detail is a sign of its vast power.

That’s it for our top 10 Kamehameha waves in the Dragon Ball franchise. Be sure to check out Twinfinite for more of our Dragon Ball coverage, including our review of Dragon Ball: The Breakers, and our guides for Dragon Ball Super.