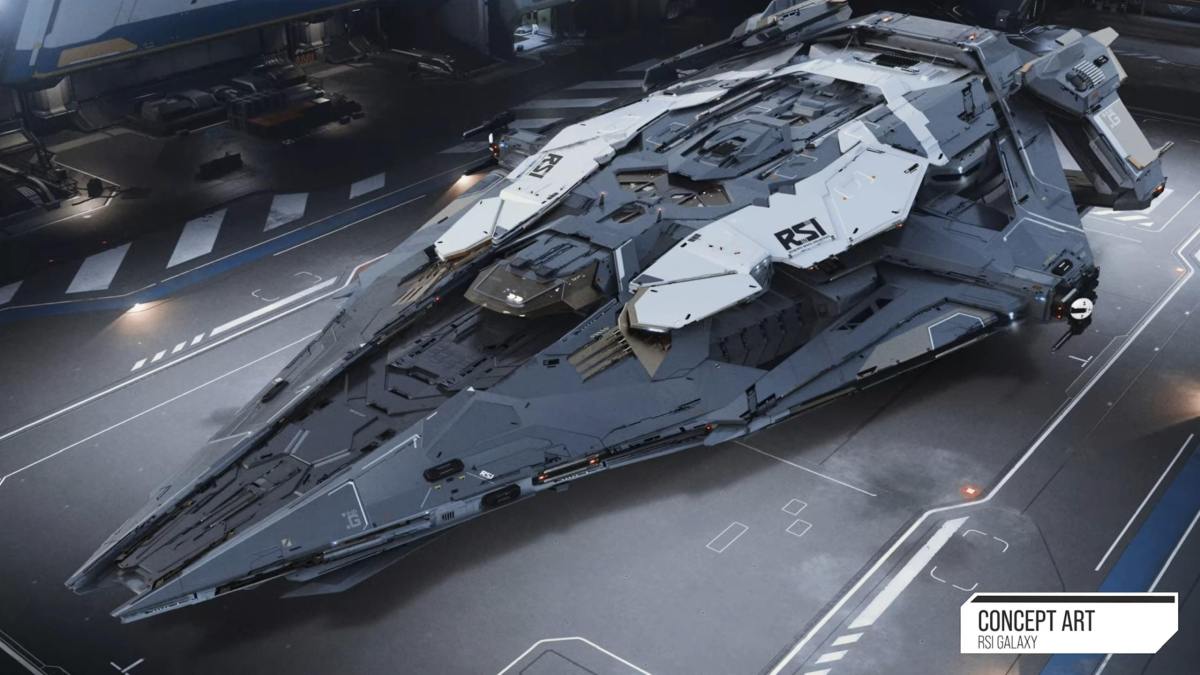 Today Cloud Imperium Games released the first look at the next large spaceship that will join the lineup of the game.

The RSI Galaxy is not designed like a warship, but it comes with the weapons it needs for a multi-role ship. It also has a very cool aggressive arrow-shaped look.

It has a spacious interior able to accommodate six players with a full habitation section, captain’s office, engineering section, hangar, and a modular area that can be fitted for different operational needs.

The three available modules are a cargo module that increases the freight capacity significantly, a refinement module that lets you pick up canisters from mining ships via tractor beam and refine the materials they gathered, and a medical module with several beds.

The ship is designed to work well for a group of friends that want to experience different aspects of Star Citizen’s gameplay.

Tiy can see what it looks like in the video below, including a handy comparison shot with a Constellation, appearing to be pretty much twice as long.

Another brand new ship is the Anvil C8R Pisces, which has just been made available and is a variant of the existing Pisces but it’s basically designed as a small space ambulance.

Incidentally, with the current event going on, you can try the game for free until Nov. 30.

In other Star Citizen news, the crowdfunding total has just passed $520 million and it’s currently sitting on $520,223,785. This means that it has received $11 million in funding since the beginning of the Interactive Aerospace Expo event last Friday.

The number of registered accounts has also just passed 4.2 million, having reached 4,226,473 at the moment of this writing.

As usual, we know that not all of these are actually paying customers, as many accounts are created for free fly events like the one currently going on. A few weeks ago, we learned that about 1.7 million of these actually purchased the game, alongside an update from Chris Roberts himself.