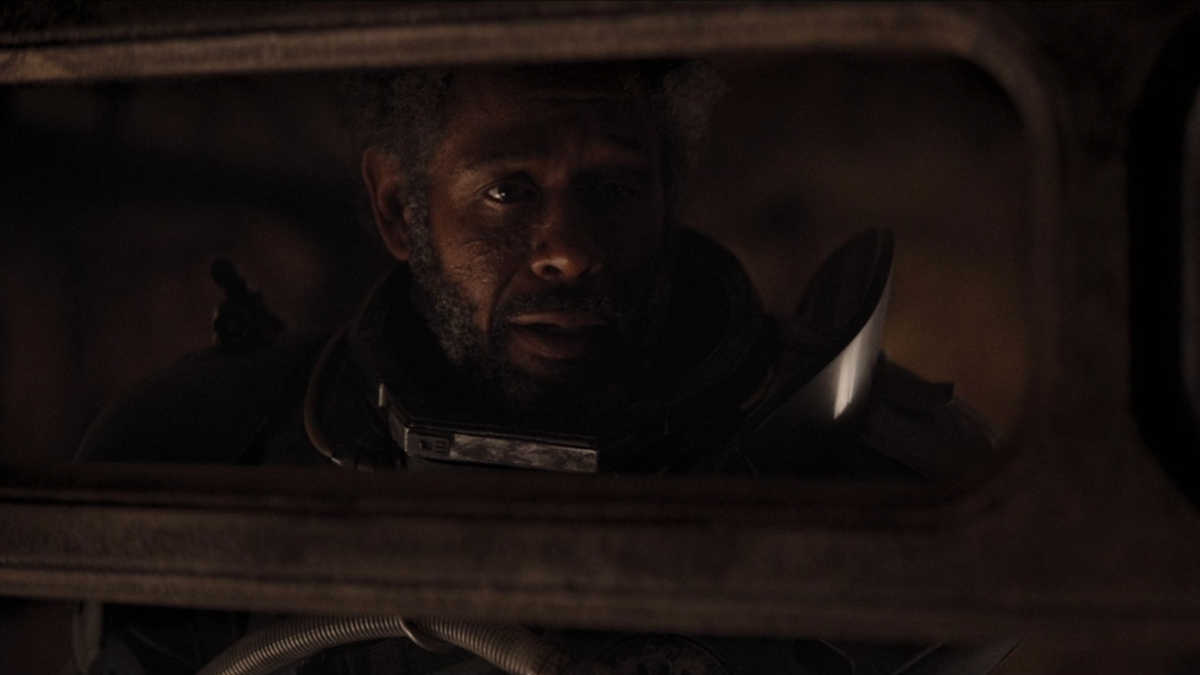 Ever since Saw Gerrera was first introduced in The Clone Wars animated series, his character has grown into a vastly intriguing and different character than what is typically presented in the Star Wars universe. Rather than being on the idealized side of good or the treacherous side of evil, Gerrera represents that very human middle ground that flitters in the varying fog of grey morality.

Even more than this, he is depicted as manic, even somewhat mad, as the character grows in animation and live-action. Many factors lend credence to this theory, such as Gerrera’s personal losses, atrocities he witnessed, and eventually his use of the creature, the Bor Gullet. Let’s explore how and why Saw Gerrera descended into the madness we see in Rogue One.

Gerrera was born during the last years of the Galactic Republic on the jungle planet Onderon. He strongly admired Onderon’s monarch, King Ramsis Dendup, while growing up in the capital city of Iziz with his sister Steela Gerrera.

During a Season 5 arc of The Clone Wars, the Separatist Droid Army invaded Onderon and imposed Confederate law on its citizens. To compound matters, King Dendup was deposed and replaced by King Sanjay Rash, a puppet leader who reported directly to Count Dooku. Gerrera and his sister openly defied the new King and were exiled from Iziz; concerned about the future of their homeworld, he and Steela began organizing a resistance with like-minded citizens against King Rash and Separatist rule.

During this period, Gerrera is depicted as a dedicated and brash young fighter ready to take on the Separatists, at times extremely impatient with the pace, and the tenacity, of fellow resistance members. By the end of the arc, his sister Steela perishes during a battle, and Gerrera blames himself for her death and is visibly affected by it. Stella’s death could undoubtedly lead to Gerrera’s distrust, paranoia, and mental state in the future and into the darker times of the Empire.

Gerrera’s Life During the Galactic Empire

At the end of the Clone Wars, Gerrera continued his resistance, now against the Galactic Empire, with a group of loyal followers dubbed the Partisans. His group of rebels would fight throughout the existence of the Empire using guerilla tactics and was labeled a terrorist group due to Gerrera’s employment of torture and, at times, murder when interrogating prisoners. Still, Gerrera is not featured again until the fourth season of Star Wars Rebels, which takes place just before A New Hope, nearly twenty years after the Clone Wars.

In this arc of Rebels, the crew of the Ghost finds Gerrera on the planet of Geonosis at the site of a massacre of the entire population. Here, a much older Gerrera is depicted as a bit twitchy and with a peal of creepy laughter, similar to someone with severe trauma and mental instability. He is still fully human, not having any of the cybernetics and breathing device he sports in Rogue One.

It is revealed that Gerrera is the only survivor of his team that went to Geonosis, all killed by the last remaining Genosian left on the planet. The crew of the Ghost and Gerrera butt heads multiple times through the two-episode arc due to Gerrera wanting to interrogate the Geonosian violently.

Gerrera finally reveals his violent nature by torturing the Geonosian on the Ghost, prompting a confrontation with the crew and Gerrera holding the last remaining Geonosian egg hostage, threatening to destroy it. Gerrera calls the crew of the Ghost and other Rebels “soft” and accuses their less violent methods as the reason they lost the Clone Wars.

It is apparent that over the decades between the Clone Wars and the years just prior to Rogue One, Gerrera’s paranoia, and extremism have grown to frightening levels. There seems to be no limit or line he would not cross to serve the cause he is fighting for, even using a terrifying creature than destroys his mind further.

By the time we see Gerrera for the final time in Rogue One, his body and mind have taken far more damage than previously seen, and he is utilizing the aid of a terrifying creature called the Bor Gullet. The Bor Gullet is actually a species known as Mairans, a semi-sentient multi-tentacled species hailing from the planet Maires.

These creatures have the unique ability to read minds and erase, or alter, memories, and more frighteningly, as described by Gerrera, “Bor Gullet can feel your thoughts. No lie is safe. Bor Gullet will know the truth. The unfortunate side-effect is that one tends to lose one’s mind.”

To give some context to the time frame, Rogue One is a few days to less than a week before the events of A New Hope. The character appears in the recent Andor Episode 8, five years before Rogue One. Here Gerrera is still not utilizing cybernetics and a breathing apparatus, so the mystery of those injuries and possible final trauma that pushes Gerrera to the manic person we see in Rogue One could be revealed in the Andor series.

The mystery of those injuries and events in those five years could be crucial to add more context to the theory and speculation of Gerrera’s madness, but undoubtedly something extremely traumatic occurred to the rebel, pushing his distrust of everyone and paranoia of people all hiding things most likely led to his employment of the Bor Gullet during his interrogations of prisoners.

The Bor Gullet operates as an empath predator, as described by writer Chris Weitz in the “Art of Rogue One: A Star Wars Story,” “He’s an empath; he can understand exactly what you’re thinking, but he also feeds off emotions.” But it is never shown or described exactly how Gerrera gets the information the Bor Gullet extracts.

The popular theory that has made rounds across Reddit over the years posits that to get the information from the Bor Gullet, Gerrera subjects himself to the creature’s grasp as well, allowing it to feed on him and deposit that information in his mind in the process.

Given Gerrera’s intimate understanding of the creature and how it affects a person’s sanity, it is easy to connect the dots that his sanity and paranoia took an extreme downward slide once he began using it. The paranoia and mistrust that grew in Gerrera over the years got to such an extreme level he felt he could no longer trust anyone to tell him the truth, and the Bor Gullet was the only way he could trust any information.

Saw Gerrera is an intriguing and tragic figure in the Star Wars lore and universe. A character that is highly relatable in his is very human and emotionally and psychologically compromised position, despite being in a fictional fantasy/sci-fi universe such as Star Wars. The character’s reappearance and sensational portrayal by Forrest Whitaker in the Andor series could shine more light on exactly how his final descent into madness happened and either bolster or disprove this theory.