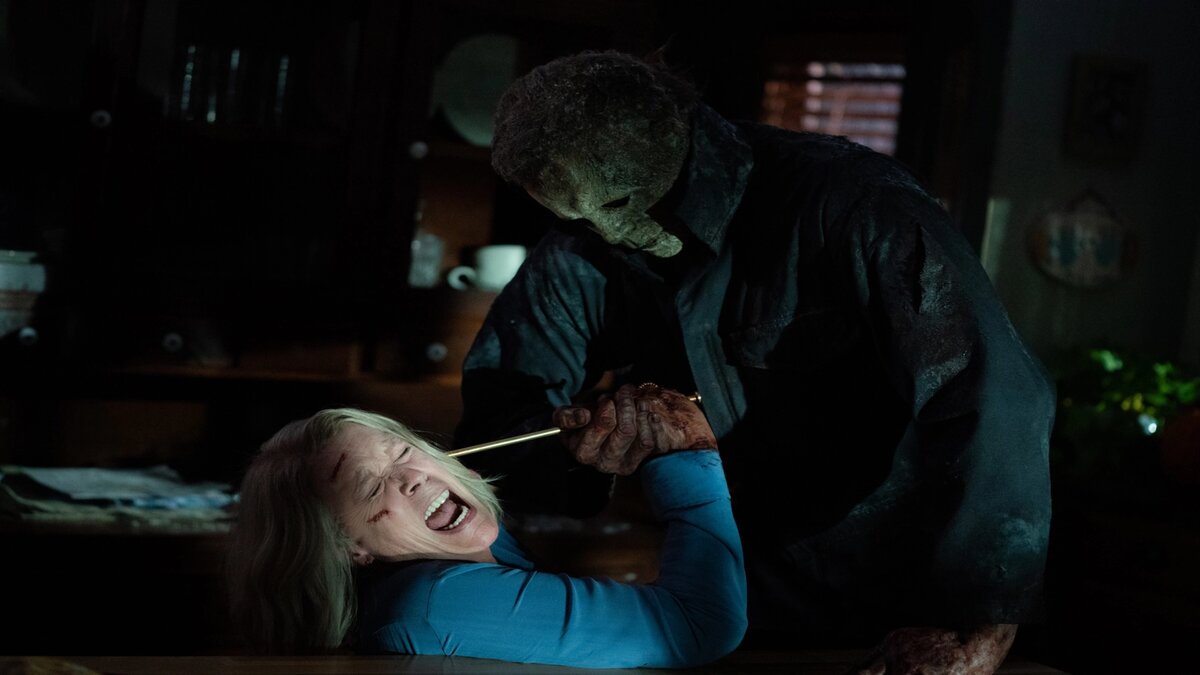 Halloween Ends is by no means the one-eighty critics of last year’s Halloween Kills hoped it would be. Some of the issues that plagued director David Gordon Green’s sophomore entry in the Halloween franchise are still present in this film. However, there is a sense of finality to the Laurie Strode/Michael Myers conflict and an interesting discussion about how evil comes in different shapes that prevents this third entry from slitting its own throat.

Halloween Ends picks up four years after Michael Myers’ horrific killing spree in the town of Haddonfield, Illinois, with Laurie Strode (Jamie Lee Curtis) writing a memoir and living in a new house with her granddaughter Allyson. The town is still reeling from the suffering Michael has caused, and his presence looms over the town’s residents like a dark cloud.

Michael’s iconic knife left a permanent scar on the psyche of anyone present during his murderous rampage four years ago, and Green showcases this brilliantly with an interaction between Laurie and a survivor who blames her psychical condition on the once famed “final girl.” It’s one of several times in the film when Laurie realizes she’s partially to blame for Haddonfield’s deteriorating state.

The film asks whether the violent act of others can influence people. We see this established after the introduction of a new character named Corey Cunningham (Rohan Campbell), a young man accused of murdering a child he was babysitting. As the film rolls on, it’s evident that Corey’s journey juxtaposes Laurie’s arc throughout the franchise and that he is what Laurie would’ve been if she were to have given in to the hate and evil we buried deep within us.

Halloween Ends actually has a lot less Michael Myers than fans would expect from what is supposed to be the series’ endgame. Much of the film’s first and second acts are spent on Corey’s predicament and his sweet yet underdeveloped relationship with Laurie’s granddaughter. It also doesn’t help that the dialogue retains some of the silliness and juvenile humor that significantly undercut many of the kills in the previous two films.

David Gordon Green and his frequent collaborator Danny McBride insisted on injecting their brand of colorful humor into Halloween. Although it works in films such as Pineapple Express and Your Highness, the humor here doesn’t align with the seriousness of Halloween’s slasher film roots.

In fact, the humor often distracts and undermines the tragedy some characters are forced to face and endure, as it breaks the reality the franchise set out to create in 1978 and leaves the audience wondering whether certain scenes should be taken seriously. The original Halloween didn’t have this blend of horror and comedy, with the characters existing in a world similar to ours, featuring believable conversations.

David Gordon Green and Danny McBride have discarded this and created caricatures of a typical matinee horror movie. Laurie Strode is no longer a woman whose need to survive and overcome a stranger’s might turns her into the “final girl” archetype. Instead, the archetype is worn like a cheap mask from Party City.

Thankfully, Halloween Ends concludes with a satisfying showdown between Laurie and Michael that serves to make up for their lack of interaction in the last entry. Fans of the original series will appreciate the respect given to Laurie here and the tension that’s built up before their epic clash. While it does take much suspension of disbelief to get past some of the punishment Laurie takes, the scene does its job in finally giving these two iconic characters their just due.

John Carpenter’s theme once again elevates the material, and the use of noise in certain scenes is masterfully done. The first ten minutes evoke many of the best moments in classic slasher films. For instance, there is a sense of terror and dread as a door slams shut and the creaking of a staircase invades the eardrums.

Often, noise becomes the audience’s warning signal that something horrific is about to occur, and the best horror films can use sound to their full advantage. Even the lack of sound can evoke a sense of dread when it’s done right.

Another welcomed aspect of Halloween Ends is the lack of flashback sequences. Halloween Kills relied too much on flashbacks that involved characters from the franchise’s history. It took away a lot of what was happening in the present time.

Thankfully, Halloween Ends cuts back on the reliance on nostalgia and focuses on furthering these iconic characters’ stories. While there is some cross-cutting between shots of previous entries and those in the present day, it’s not as noticeable as in the last film. This final entry examines the effects of Michael’s horrific actions of the past on other characters rather than outright showing the audience again what he’s done.

Halloween Ends completes the reboot trilogy and puts a definitive exclamation point in Lorie and Michael’s decades-long story. Although the humor does undermine many of the scares, there is enough here to satisfy longtime Halloween fans. Just be prepared for a somewhat lukewarm conclusion to Michael and Laurie’s final story.