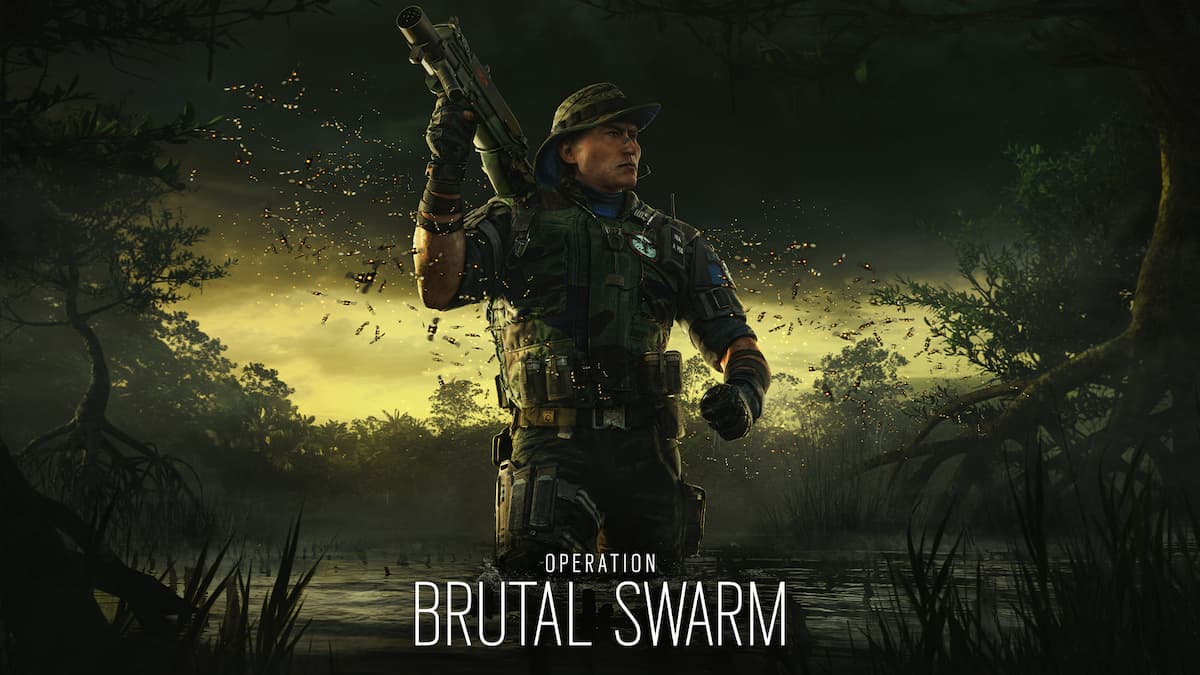 Ubisoft has officially revealed the newest season for Tom Clancy’s Rainbow Six Siege. Before the Grand Finals of the Rainbow Six Berlin Major, the developer hosted a segment breaking down the newest operator, who was revealed a few days ago, while also sharing what changes Operation Brutal Swarm will bring to the tactical shooter.

The newest operator hails from Singapore and goes by the name “Grim.” He also has a soft spot for bees, at least mechanical ones.

With the power of the Kawan Hive launcher and microtech bots, Grim aids his team by getting vital information on enemy locations. The launcher shoots out projectiles that contain beehives that will then open up and release a small swarm of bees. The bees will live-ping any foe who walks through the swarm for three seconds while applying a debuff to them.

Alongside Grim, Operation Brutal Swarm is aiming to set the foundation for the future of the tactical shooter with a bevy of important changes to the core gameplay loop. Stadium, from the Road to Six Invitational Event, will be entering the competitive map pool this season while the team works on polishing a new map for the following season. Stadium received some tweaks after the developers talked with professional players, and will be playable in casual and competitive modes.

A huge change will be coming to the recoil system and how the team balances the game on console versus PC. Now, your attachments will have more impact as weapon-specific ones become universal for all weapons, aiming to encourage players to explore more options when it comes to customization versus what’s currently available. The developers are pushing towards burst firing being the optimal method of engagement, and these changes will impact the PC experience for the time being.

Player behavior and reputation penalties have been a work in progress for the team behind the tactical shooter. This season will introduce a new player penalty for abusive text chat in a manner similar to how the current reputation penalties are implemented. Players will also be able to report cheaters while watching match replays.

Grim’s implementation isn’t the only new thing happening to the operator pool. A new EMP Grenade will be introduced to certain agents albeit it’ll be a little less effective compared to Thatcher’s ability. Rook will be getting an important buff as players downed while armed with his armor plate will be able to self revive to 25 HP. Also, Dokkaebi’s Logic Bomb will now interrupt dead operators’ POV, while in the past it would only affect living players.

Ubisoft is targeting a few quality of life changes. The tactical map will now include a list of possible objective locations as well as the map ban system will see a noticeable change by including five maps versus three as the developers look to increase map diversity.

Finally, the battle pass will be getting a nice value bump to it. Owning the battle pass will grant a 10% discount on all store items, and players can now gift battle passes to friends. There is a caveat, as this is only available on the same platform and the recipient must have been a friend for over 90 days.

Tom Clancy’s Rainbow Six Siege is set to kick off Year 7 Season 3 on Sept. 6. However, eager fans can hop into the test server on Aug. 22 to get a look at all the new content Operation Brutal Swarm brings as well as purchasing the Castle Elite skin on the same day.

Tom Clancy’s Rainbow Six Siege is currently available for PS4, XboxOne, PC, Xbox Series X|S, and PS5. Be sure to check down below for more related content, and stick with us as we’ll be bringing more content as the season launches.