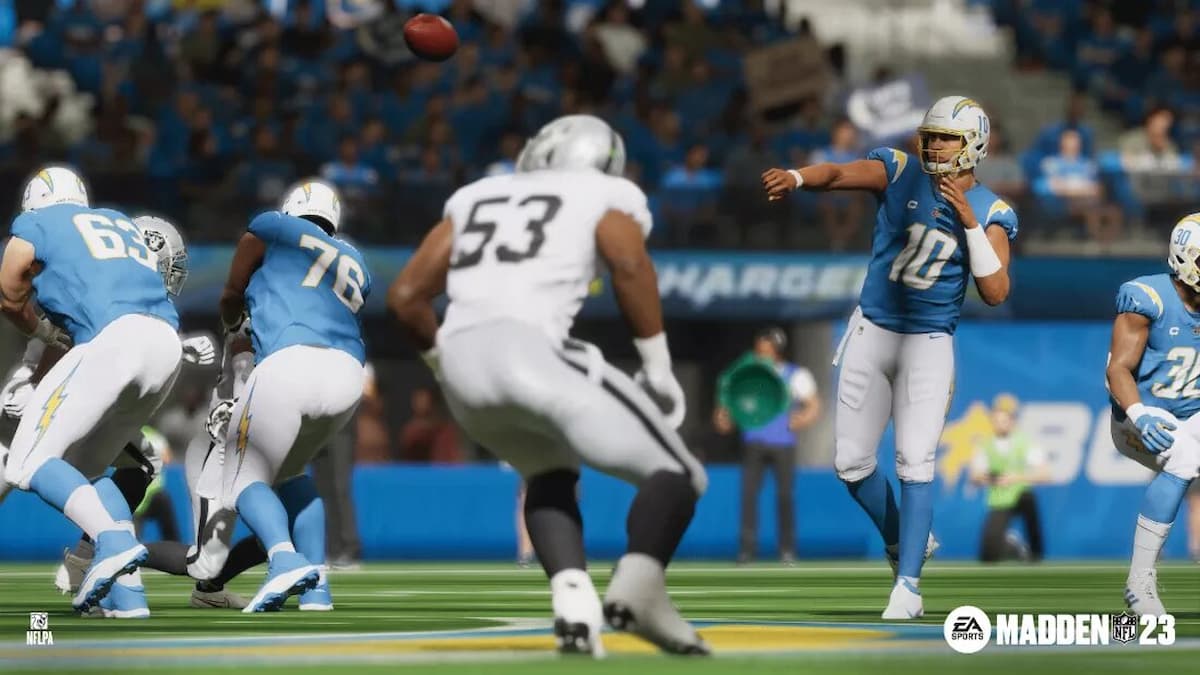 Despite boasting speed for days in the backfield and under center, at the end of the day the NFL is a passing league. But if you’re going to attempt to light up an opposing secondary, you better know how to throw all of the passes in Madden NFL 23. Fortunately, we’ve got this trusty guide for that.

Distribution hasn’t changed when it comes to throwing the ball. For PlayStation users, pressing X, O, Square, Triangle, or R1 still corresponds to wide receivers 1 through 5, respectively—whereas pressing A, B, X, Y, or RB on Xbox will get the job done just as well.

Now that our very necessary distribution refresher is out of the way, let’s get to those passes.

Are you a big fan of slant routes, or generally getting the ball out quickly? Then the bullet pass may be exactly what you’re looking for, and all you have to do is hold the corresponding receiver button down. Blink, though, and you may miss your window.

As opposed to the bullet pass, a lob is best used when you’re anticipating your wideout to out-run their coverage and find open space. To accomplish this, simply tap the button of the receiver you wish to target—and don’t forget to check if there’s a safety playing over the top.

Not to be confused with the lob, a touch pass requires the slightest (and quickest) of touches, and is best used when you’re looking to drop a pass in between the linebackers and defensive backs. If you happen to be planning a touch pass pre-snap, though, be careful not to double-tap the snap. The result may be disastrous.

Do you trust your tallest option out wide? Are you feeling a bit impatient or daring, and want to gamble with double coverage? Maybe the high pass can bail you out. Just make sure you’re holding L1/LB while pressing the corresponding receiver button.

On the other side of the coin, this feels about as low-risk as it gets. Maybe you thought about a touch pass but hesitated for just a moment, and now the defensive back is blanketing your target. Perhaps you just love quick curl routes, and are hoping to catch the defense off guard. If that’s the case, make sure to hold L2/LT while pressing the appropriate receiver button.

Throw the Ball Away

Now that all of the actual passes are out of the way, technically speaking, what if you have no other option but to get rid of it? Do not fret! All you have to do is make sure your quarterback is out of the box before pushing down the right joystick.

The pump fake can always be a bit tricky. On the surface, it’s a simple yet quick double-tap of the wideout button you wish to fake to. However, wait just a split second too long and that attempted pump fake turns into an accidental, potentially dangerous touch pass. So if you’re trying to be sly, have those fingers ready.

And with that, what are you waiting for? No matter how you feel like setting up offensively, you’re now as equipped as ever to throw all of the passes Madden NFL 23 has to offer. Yet, the fun doesn’t have to end there. For more on Madden 23, take a gander at the links below, and check out our picks for the fastest quarterbacks and our relocation guide.