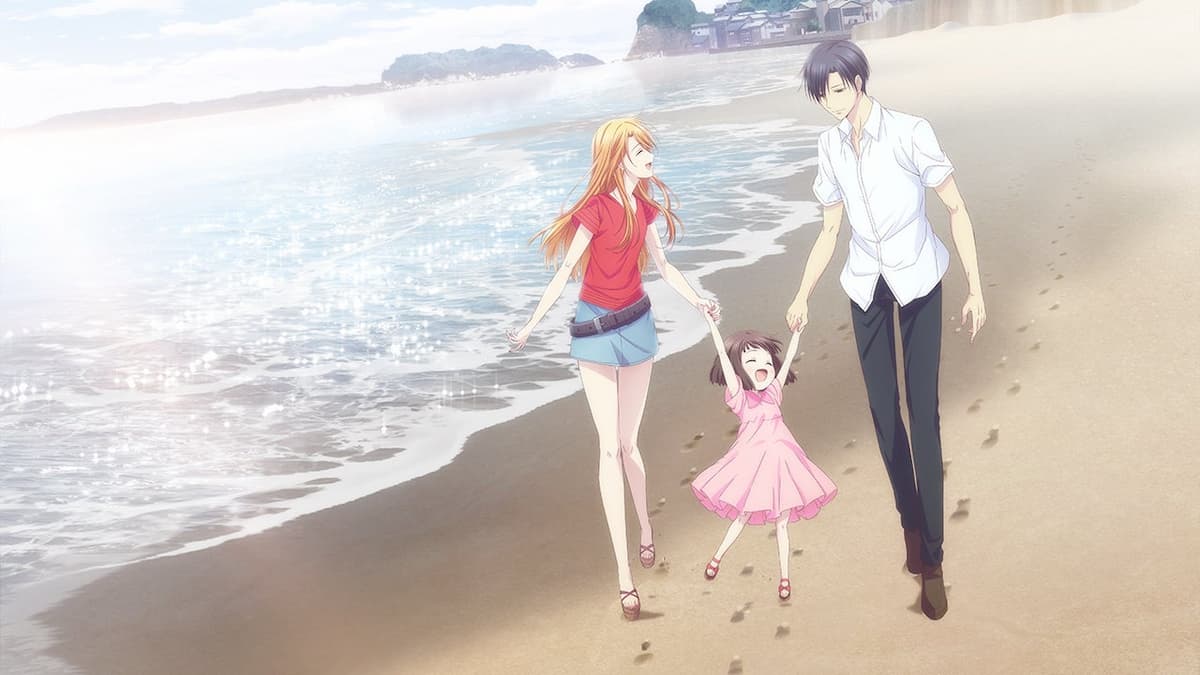 Fruits Basket -Prelude- is an incredible new story for the beloved anime. The different arcs of all the characters are a delight to watch, and longtime fans will be happy to see the return of the cast, including Tohru Honda and Kyo Soma. However, the film’s primary focus is Honda’s parents, Kyoko and Katsuya, a subject briefly discussed in the show.

Katsuya Honda is a student-teacher that is trying to please his father, while Kyoko is a student that rarely goes to class. Although their age difference is taboo, they slowly fall in love and do whatever they can to make their relationship work. I found myself immersed in their relationship as the two deal with many challenging situations and the eventual birth of their daughter, the anime’s main protagonist.

If you aren’t too familiar with the anime, don’t worry, the first 30 minutes are a compilation of scenes within Fruits Baskets to give fans and newcomers a recap. In this brief storyline, Tohru and Kyo are at the beginning of their relationship, but it isn’t long until they finally get together.

I haven’t watched too many anime where romance is a significant factor, so it’s refreshing to see the characters actually kiss and show passion for one another (something I’ve rarely seen in other shows). The story takes you on a journey through their lives as they fall in love. This part may be a bit confusing to newcomers since it goes through the scenes quickly, so I would recommend at least watching the first and second episodes of the Fruits Basket anime to get a general idea of the characters.

Tohru and Kyo are the classic enemies-to-lovers trope, which works well for the show since it’s exciting to watch how the events unfold. I fell in love with the characters almost instantly and rooted for their happy ending, which displayed many hardships and the profound care they have for one another, similar to Tohru’s parent’s relationship.

For example, when Kyo looks back on his past, he is reminded of his father’s harsh words and feels like a monster. But, even in his distressed state, Tohru holds him tight and reassures Kyo that she cares for him no matter what. This unconditional love really showcases why this is known to be one of the best romance drama anime.

Having these love stories side by side is almost like a reflection of one another. I watched as the mother and daughter learned to love despite their insecurities; the same goes for Kyo and Katsuya, two men with many similarities and differences.

The pace slowed down once the plot reaches the tale of Tohru Honda’s parents. In Fruits Basket, Kyoko is a fantastic mother figure to her daughter, and Tohru highly regards her throughout the anime. Moreover, Fruits Basket -Prelude- shows an entirely different side to the character, especially when she is shown to be a punk who rebels against her parents.

Kyoko meets Katsuya shortly after, and the two are complete opposites that somehow are perfect for each other. But, of course, the concept of their age difference is still an interesting dramatic element for Fruits Basket -Prelude-. We know that these characters shouldn’t be together, and yet their love for one another is inspirational, specifically when Katsuya’s father explains how happy his son has been since Kyoko came into his life. With this in mind, I started to look past the age difference, and as a result, it made me think differently on this subject matter. However, I am glad minor characters in the film regard the relationship as forbidden.

Because I have also watched the show, knowing the fate of the characters creates a much more impactful story. It’s nice to see a deeper look into their past since Kyoko and Katsuya aren’t present in the anime.

Kyoko is by far my favorite character in the film since her portrayal is incredibly vulnerable and raw, primarily when she deals with her depression and loneliness. Even if she is fictional, she is showcased in such a genuine and realistic way with her willingness to want to stay tough despite what her parents and peers have said about her. But unfortunately, she is still human and cries when things become too much for her, and this is when Katsuya begins to notice her because she isn’t fake like everyone else.

Although Katsuya is older, he respects and takes care of Kyoko no matter what, mainly when he stands up against others who oppose the love of his life. I’ve witnessed a lot of male leads in anime, but I haven’t seen one quite like him; Katsuya is honest and confident enough to change Kyoko’s outlook on life. She goes through so much in this storyline, which makes me think of her differently when watching the anime. The same happens with Katsuya since he is barely present in the show, and now we see them both clearly in this film.

Tohru and Kyo are still involved in the story for fans who want to see more of the anime’s main characters. Instead of being teenagers, they are curious kids with a deep love for Kyoko, and there are additional scenes where we see Katsuya be a father to his daughter, a foreign topic within the show. These particular moments display the love both parents share for Tohru, and because parental figures aren’t always in anime, it’s pleasant to see ones that deeply love their daughter.

The ending of Fruits Basket -Prelude- is both bittersweet and endearing and makes you want to watch the entire anime to explore Easter Eggs and hints shown throughout the story. The more I saw Tohru, the more I saw the characteristics of her parents, and even if Kyo isn’t related to Kyoko, he still grows as a character in their little moments together.

The overall experience of watching Fruits Basket -Prelude- is an emotional rollercoaster of joy and sadness, showcasing a realistic capture of human existence. Whether you are a longtime fan or a newcomer, this standalone prequel movie is undoubtedly a wholesome story that can bring you to tears. On top of that, you won’t want to miss out on this visually breathtaking and sincere film, where the love story of Kyoko and Katsuya continues with Tohru and Kyo.