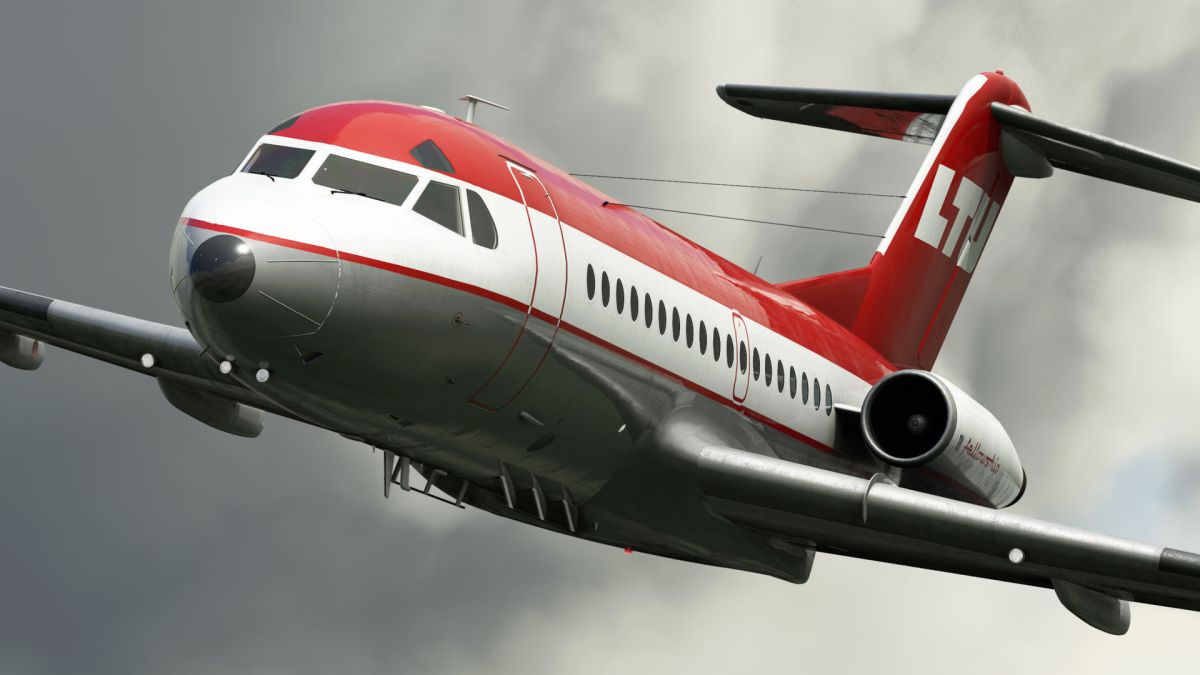 We start with a look at the Fokker F28 Fellowship by Just Flight, showing quite a few exotic liveries, alongside a small development update.

“Development work on the aircraft visuals (models, textures, animations and liveries) is pretty much complete now and is undergoing testing, alongside the flight dynamics for each of the four variants (-1000 to -4000).

Systems coding and an extensive custom Wwise sound set are now in progress and we’ll be sharing previews of those in the coming months as we work towards the release later this year.”

Next is DC Designs, offering an update and new screenshots of its work-in-progress Concorde.

“One major step forward has been the creation of a flight model that reflects the unique characteristics of a delta wing. In short, MSFS simply does not yet support them correctly, so it requires some clever work to implement a true delta – MSFS seems to think that wings are only straight, and fuselages are only cylindrical, with nothing in between. Thanks to the hard work of Paul Frimston and CodenameJack, as well as a nifty idea of my own, Concorde is now flying well and is on her way to the full implementation of her flight model characteristics.

In addition to this, work has continued on the flight deck with more instruments being animated, more modelling work and more coding to get everything “alive” and operational. Given the huge number of instruments, that’s going to take a while. These essential works will take priority for the next couple of weeks before I can start thinking about working on other “nice to have”, but non-essential, areas such as the passenger cabin.”

We also hear from SimWorks Studios, which provided a roadmap for its development including Van’s Aircraft RV-14 (of which we get a few screenshots) and the upcoming Pilatus PC-12.

“RV-14: the art side is complete and code work is expected to be done any day now. The flight model is in a very good state. Sounds are here and at a very good stage, with fine tuning and AI being the last things due for this task. We are working towards a February release, barring any unforeseen problems. The RV-14 will be followed by the RV-10 later this year, with the RV-8 and RV-7 in late 2022 or early 2023.”

Pilatus PC-12: We recently signed a licensing agreement with Pilatus Aircraft to bring their PC-12 to Microsoft Flight Simulator! Our current plan is to make two PC-12 releases: one will be the PC-12/47 which will come with a mixed glass/steam cockpit. Our goal is to have the aircraft out towards the middle of the year, built to the same standard as the Kodiak. The second would be the Pilatus PC-12NG with a fully-fledged custom glass cockpit, but due to the code work required, this is going to come in 2023.

Last, but not least, we can take a look at a landing of the freeware C-17 Globemaster III by Delta Simulations.

If you’d like to know more, you can follow the aircraft’s development on the developer’s Discord server.