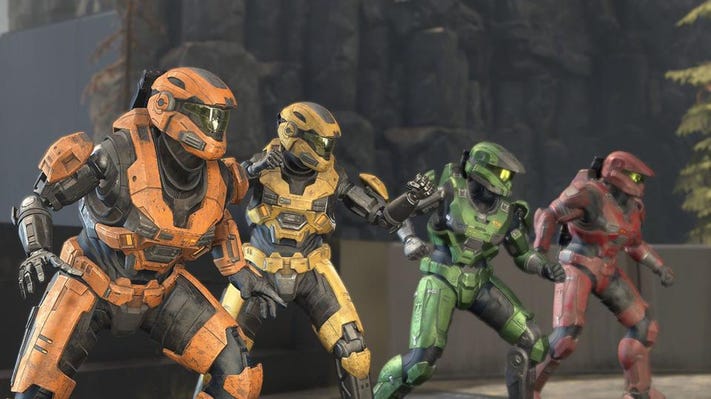 As Halo Infinite’s new Slayer-based playlists have gone live, 343 Industries has also revealed a number of changes regarding the Big Team Battle (BTB) and Ranked playlists, as well as further tweaks to the challenge system in a blog post.

The post reiterated that the Slayer playlists that launched yesterday were just the beginning of the team’s plans for further modes based around the classic Team Deathmatch mode. “Slayer fans should expect this playlist to expand with new experiences in the months to come,” the post reads.

Free-for-All, Team Slayer, Tactical Slayer (SWAT) and Fiesta playlists were all introduced into Halo Infinite yesterday, less than a week after the game’s campaign officially released.

It wasn’t just the new game modes that came as part of yesterday’s update. The developer also announced that some changes had been made to Ranked & BTB matchmaking. Specifically, ranked matchmaking rules have been adjusted to increase the priority of close individual skill matches. This will be particularly noticeable for players at the higher skill levels.

343 noted that it’ll continue to monitor ranked and BTB matchmaking closely and make any further changes it sees fit in the future. It also acknowledged the ‘intermittent matchmaking issues’ in the BTB playlist and noted that it’s actively working to address these issues that have been reported over the last few days.

For anyone hoping for more Ranked playlists, you might have to wait a little longer. Any “future ranked updates are going to take time,” the blog post reads, citing “more technical complexities” as the cause for a delay in the rollout. No timeframe for more ranked playlists or updates was announced.

The blog post also addressed some concerns within the community regarding the CSR (Competitive Skill Rank) system in Ranked matchmaking. It provides an insight into the median CSR, and acknowledges that player distribution isn’t quite where the developer wants it to be, nor aligns with fans’ expectations. Changes will be made, but these need to be carefully done so as not to negatively effect players who have already achieved higher-than-expected CSRs.

Rounding out the blog post was the news of further updates to challenges. 343 Industries has ‘pruned’ the current set of challenges to remove a number of mode and activity-specific challenges. Others have had their requirements lowered or had their weight reduced across the challenge pool so they appear less frequently. ‘General’ challenges saw their weighting increased.

Requirements and XP rewards will vary depending on the rarity of the challenge, indicated by the different colors of each challenge ‘card’ in your list.

Finally, following the Fractures: Tenrai event’s debut, 343 Industries has noted that in future events, Event Challenges will come in more frequently and won’t get ‘stuck’ behind standard Weekly Challenges. Events will still have a finite limit to the number of challenges that can be completed in any given time-limited period, but the maximum will be increased to let committed players progress through the Event Rewards a little bit faster.

What do you make of the recent changes to matchmaking and challenges in Halo Infinite? Share your thoughts in the comments down below.