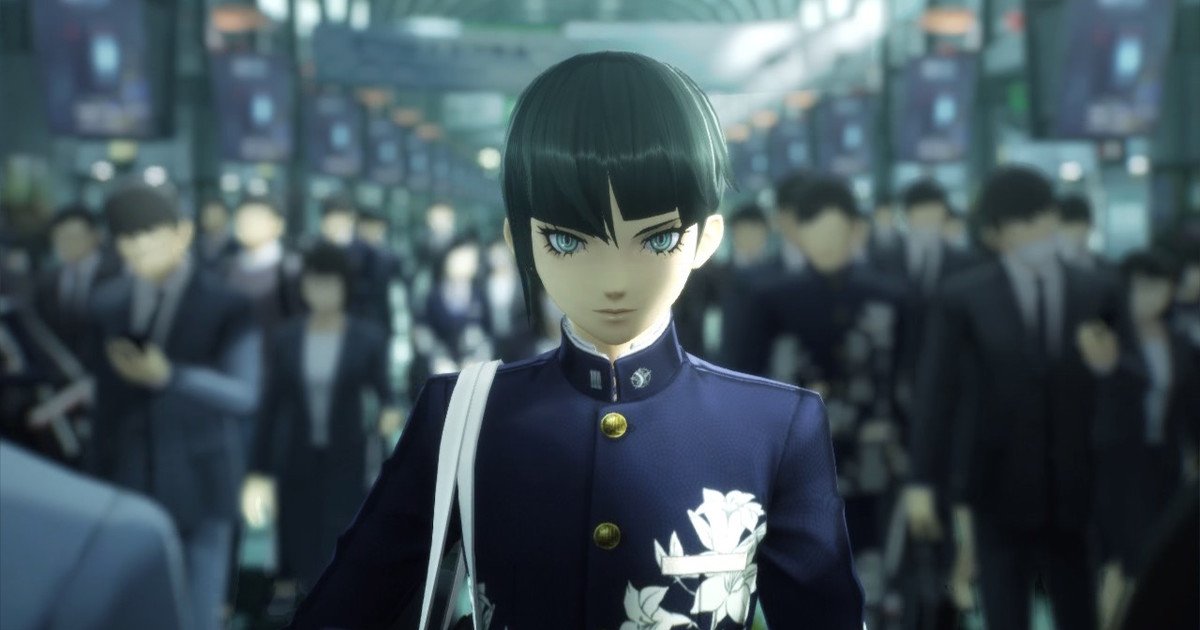 If you’ve ever played an SMT game, the setup of Shin Megami Tensei V should feel instantly familiar. You take control of a teenage boy, and you quickly find out that he has the power to summon demons and control them in battle. Then, you explore a warped version of modern-day Tokyo. And by “warped” I mean it’s a totally screwed up and wrecked, apocalyptic version of Tokyo filled with angels and demons trying to kill you.

You then plow through the story and make decisions that will ultimately lock you into one of (at least) three endings: Lawful, Chaotic, and Neutral.

Despite featuring new characters and story beats, the premise is always largely the same, but don’t take that as a criticism of the game. Shin Megami Tensei V knows the kind of story it wants to tell and it sticks to it with confidence, and hey, if you couldn’t care less about the narrative, maybe the crushing difficulty of the combat encounters will convince you to stick around.

As far as introductions go, Shin Megami Tensei V feels the most Persona-like out of all the mainline games in the series. Whereas in past games, your companions were mostly all robots with zero-depth to them and only served to push one of the game’s three main alignments and ideologies on you, SMT V’s characters make more of an effort to come off like actual people.

It’s probably got to do with the fact that the introductory sequence is just so Persona, perhaps to a fault. You’re introduced to the protagonist as he’s getting ready to leave his classroom, and a school announcement encourages students to walk home in pairs as there have been unexplained murder cases popping up all over Tokyo in recent days… Sound familiar?

You’re then introduced to your classmates, but you already have a sense of who they are without needing to even know their names. The shy, demure girl who’s really popular among the guys, the goofy dude, the slightly nerdy girl who wears glasses, and the stoic guy that you can always count on in a pinch. Do they ever evolve beyond their stereotypes? No. SMT V might be the most Persona-like SMT game in the series, but it’s still not Persona, where Yosuke Hanamura evolves from the comic relief sidekick to one seriously dependable man who’s also incredibly emotionally mature.

And, truth? That’s fine with me. I’m here to fight angels and demons in a world where people are getting dragged off to hell and wage war against God and Satan themselves. I literally don’t have time to be thinking about dating my classmates or walking home together; leave that kid stuff at the door.

The side characters in Shin Megami Tensei V have always been nothing more than caricatures meant to embody the extremes of the alignment they represent, and that holds true here. SMT V makes an odd attempt to mimic Persona in its early hours by forcing you to interact with them and walk home together like you’re all best buds. This doesn’t last long, however, as the game slowly peels the characters away and shifts its focus to the combat and your character alignment.

Things go sideways, Tokyo becomes an apocalyptic desert, your character fuses with a demon and becomes a mythical being called the Nahobino, and you start kicking demon ass.

And yeah, the combat rules. The Press Turn system makes a return in SMT V, forcing you to exploit enemy weaknesses to gain extra turns in battle. Each time you hit a weakness or score a critical hit, you gain extra turn (up to four), and by doing this, you could potentially end a battle in just one round.

There is, of course, a flip side to this. Enemies can also take advantage of the Press Turn system and gain extra turns if they hit any of your party’s weaknesses. In addition to that, missing an attack will cause you to lose two turns, while having an enemy completely absorb your attack will cause you to lose all four. It’s brutal, knowing that just the slightest mistake could cause your party to get completely annihilated. One wrong move can give your enemy the advantage, and if they’re able to exploit your weaknesses, things just snowball from there.

Shin Megami Tensei V does give you control over how you customize your party and the Nahobino. A new Essence Fusion system allows you to collect various demon essence items as you play through the game, and these can be used to help the Nahobino learn new skills or alter his affinities. This isn’t something you want to be doing often, as essences are expensive and quite limited; rather, you’re meant to use them before boss battles so that you can effectively cover up your weaknesses and build the rest of your party around the Nahobino.

Your demons can inherit skills via Essence Fusion, too, but only the Nahobino’s affinities can be altered.

And speaking of demons, the negotiation system makes a return as well and… it’s still as random as ever. This might be an unpopular opinion, but the demon negotiation has always been the one major aspect that I really disliked in the Shin Megami Tensei series. You’re supposed to start a conversation with a demon and pick dialogue options that complement its personality type to try to convince it to join you, but this results in a clumsy process where you’re often left guessing in most situations.

Some demons make it easy for you; Pixie likes empathetic and kind-hearted answers, while Oni likes brute strength. The in-betweeners like Nekomata and Kelpie are far trickier, and trying to recruit demons can often feel like a tedious trial-and-error process.

Thankfully, once you’ve successfully cleared a conversation with a demon, you never have to do it again. Recruiting them in battle becomes much easier, and you can also summon them straight from your demon compendium if you’ve got the Macca to spare. Just like in past games, you can fuse multiple demons together to create a new one. Bonus points if your fused demons have already learned powerful skills that you can pass on to your newborn child.

The demon fusion system continues to be one of the best aspects of the series, especially when you’re trying to put together a strong enough party to face the challenges ahead. It’s fun to experiment with different combinations and see what you can get at any given point in time, and nothing beats the feeling of finally reaching a high enough level to fuse that super ultra-strong demon that costs you tens of thousands of Macca in summoning costs.

As if to flex the graphical power of the improved Switch hardware (as opposed to the 3DS, where we saw the release of the last mainline SMT game) and the Unreal Engine, Shin Megami Tensei V’s levels are also much bigger than ever before. At first glance, this seems like a good thing. Bigger levels mean more quests, more to explore, and more secrets to uncover. It also means more challenges, such as Abscesses which continuously spawn enemies and block off map coverage until you clear it out. Getting rid of Abscesses also unlocks new Miracles for the Nahobino to learn, which can range from elemental masteries to increased demon stock.

However, bigger levels also mean that you’re going through long stretches of combat with little respite. Again, this is a common complaint I’ve had in past SMT and Persona games: more often than not, dungeons run on for too long and just don’t know when to end. Exploring new levels in SMT V were fun and exciting at first, but I also found myself getting fatigued easily, especially since the environments are all a little samey.

You see, SMT V’s version Tokyo is an apocalyptic mess where the entire city is half-buried in sand. The early levels, in particular, just have you exploring desert city areas that can feel a bit tiresome after 20 hours. Yes, 20 hours, and that’s less than a third of the full game. This is a long-ass game.

As always, the saving grace lies in the boss battles and the choices you have to make. The former always make for exciting affairs; nothing is scarier than walking a few inches too close to your next objective marker without saving your game, only to trigger a cutscene introducing your new formidable opponent.

Every boss battle felt like a life-or-death situation where I had to pull out all the stops to survive. Even if I already knew the boss’s weaknesses and strengths from dying to them the first time and had already restructured my entire party entirely for this fight (which is something you’re definitely gonna need to do for most of these fights), victory never came easy and it always felt like I’d only just barely gotten out of it alive. It’s exhilarating, though you’re always in danger of having the age-old SMT/Persona problem of getting a Game Over screen whenever your protagonist dies rearing its ugly head at you.

Seriously, Atlus, stop it. Stop ending my entire career because the enemy decided to focus all their attacks on the protagonist and kill him before I even have a chance to react. Granted, this happens very rarely but it can happen, and when it does, it hurts. Shin Megami Tensei V doesn’t do checkpoints or auto-saves either, so if you lose, you have to reload your last save file.

And finally, tying everything together is the story itself. As is the case with any other SMT game, this is meant to be more of a macro-level story, rather than a micro one where you’re focused on the little things like character development and day-to-day activities. Big things happen in this game all the time, whether it’s the demons swallowing up a new part of Tokyo or terrorizing an entire school full of students.

Every decision you make in this game is major and ultimately affects the ending that you end up with. You’re either siding with God and the angels, or Lucifer and the demons, or maybe you’ll find a way to carve your own path. Regardless of what you choose, you’re going to hurt someone or suffer in some sort of unimaginable way you never considered. It’s a keystone of Shin Megami Tensei, and it continues to feel compelling here.

One thing I will say, though, is that while its predecessor SMT IV did an impeccable job of making all three routes seem equally logical (and irrational) in their own ways, SMT V falls a little short here. The game is too quick to paint one side as inherently good or evil, and it makes the ‘good’ ending seem a bit too obvious, which is not what you want out of a game that’s meant to push and question your own moral boundaries.

At the end of the day, I’m not so sure that Shin Megami Tensei V really pushes the envelope forward for the series. It doesn’t have the emotional brevity of the excellent Nocturne, nor does it present the same kind of moral quandaries that IV did. It certainly looks better and plays incredibly well, and from a gameplay perspective, this would easily be the most accessible entry of the bunch. It won’t disappoint series fans, especially those who have been waiting for a series comeback for years, but it might be time for Atlus to think about where the series is headed next.