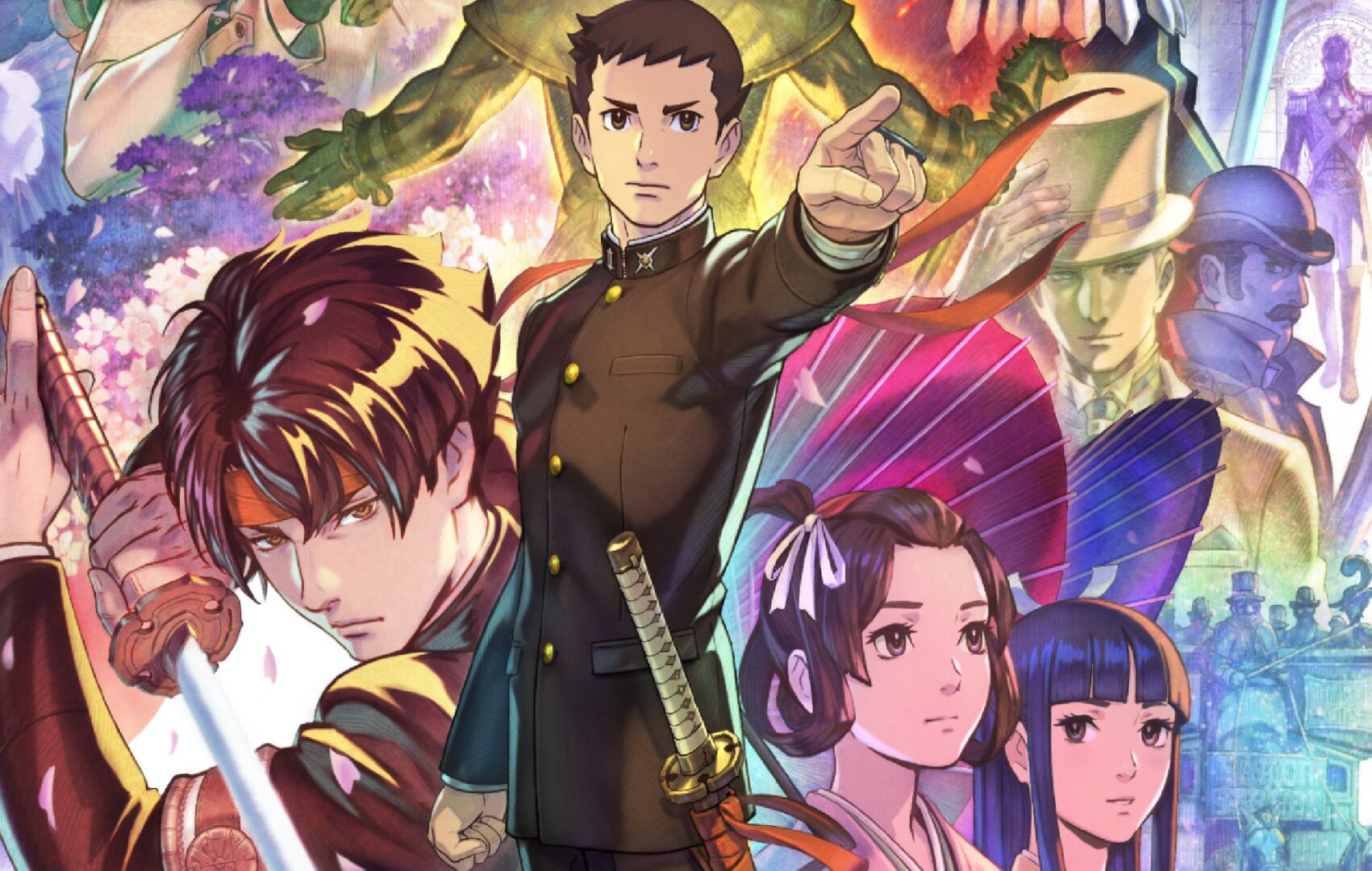 The Ace Attorney series has become a household name in the visual novel genre at this point; regardless of whether you’ve played them yourself, it’s likely that you’re at least somewhat familiar with its iconic lines and idiosyncrasies. Its characters slam the desk when they have a point to make, and they point a confident finger at their opponent and yell “Objection!” when it’s time for a debate.

Phoenix Wright and Miles Edgeworth have become icons in their own right within the video game world, so it was nothing short of surprising when Capcom announced a few years back that they were making a new Ace Attorney game set in a completely different time period with a totally new cast of characters.

The Great Ace Attorney is a period piece set in 19th century Japan, featuring Phoenix’s own ancestor as the main protagonist. It’s a sharp left turn for the series –one that left me skeptical when it was first announced– but this duology of games manages to retain the essence of Ace Attorney while boldly moving forward into new territory. It’s so confident, self-assured, and most importantly, the story knows where it wants to go, resulting in one of the strongest narrative arcs we’ve ever seen in the series.

Players take control of Ryunosuke Naruhodo, a university student in Japan who decides to pursue studying law after getting caught up in a murder case where he’s nearly found guilty of the crime. After that initial setup, he sets off to Great Britain on a study tour to learn more about their court system with his close friend Kazuma.

Ryunosuke is accompanied by Susato, his judicial assistant, and has frequent run-ins with a famous English detective Herlock Sholmes, who totally isn’t a reference to a certain other famous detective in mainstream media. The structure of the game is as you would expect from your typical Ace Attorney game; the story is broken up into a few chapters, you’ll conduct an investigation, collect evidence, then present them in a trial to try to acquit the defendant.

The Great Ace Attorney Chronicles does try to buck this trend by experimenting with a new mechanic, though, and both games are stronger for it.

As someone who’s become so accustomed to the investigation-trial structure of the games, I was surprised to find a very small handful of chapters that didn’t involve official courtroom trials at all. One chapter early on in the first game takes place entirely on a steamship, where Ryunosuke and Susato are forced to get to the bottom of a murder within a short span of time, using whatever resources and info they can find on the ship.

To keep things fresh and preventing it from just being a case of clicking on things and reading about them, The Great Ace Attorney Chronicles introduces a new investigation mechanic: the Dance of Deduction.

Sholmes is an incredibly observant detective who can make deductions simply by observing a person and studying their behavior. After doing so, he then presents his deductions and theories, but you’ll soon find that while he’s largely able to pinpoint whenever a person is caught in a lie, his theories are often off the mark, and it’s up to Ryunosuke to steer him in the right deduction.

After Sholmes presents his theories, you’ll then have the chance to go through his thought process once more and course-correct as necessary. This involves studying the witness from all angles, finding a crucial piece of evidence that contradicts whatever they’ve said, and make a new deduction based on that. All of this is tied together with exciting detective music as both Sholmes and Ryunosuke spin around, snapping their fingers, and shooting all-knowing looks at their witnesses when a dramatic stage spotlight shines upon them.

This is easily one of the biggest delights of the game. Truly, there’s nothing more entertaining than watching these two himbos twirl around smugly when they know they’ve caught their witness in a lie. It’s silly, over-the-top fun that fits in perfectly with the tone of the series, and it never failed to make me smile.

That’s not to say that the official courtroom stuff isn’t great; while Edgeworth will always stand out as the best prosecutor the series has ever seen, Great Ace Attorney’s Lord van Zieks is no slouch either. In fact, van Zieks embodies all of the arrogance and smugness we see in Edgeworth and takes it to another level.

He’s absolutely relentless when it comes to shutting down Ryunosuke’s arguments, and he caps it off with immaculate animations of him pouring and swirling a glass of wine before crushing it in his hand in a fit of rage. The animations are all on point in this duology, adding lots of flavor to each individual character.

The courtroom trials also introduce a jury system, which throws a wrench into the already tough cases Ryunosuke is forced to crack. Each trial in Britain features six jurors, all of whom can lean towards a guilty verdict if you keep pressing witnesses during cross-examination and fail to turn up any useful information. If the jury decides that the defendant is guilty, you’ll be able to perform a summation examination where you have one chance to change the minds of the jurors.

The summation examination works fairly similarly to cross-examination in that you have to point out inconsistences or contradictions between two jurors’ statements, then pit them against each other. Cast enough doubt on their judgment, and you can convince the jury to change their stance and prolong the trial. While this does break up the predictable structure of a trial, the summation examinations can sometimes feel like padding, and overall, they don’t really add anything meaningful to the game other than throwing another obstacle in Ryunosuke’s path to make things harder and more drawn out. At least the jurors all come with unique animations, though. Those are always fun to look at.

But of course, it’s not just the trials and investigations that players are looking for in an Ace Attorney game; the story matters, too. And in that department, The Great Ace Attorney Chronicles truly shines.

With both games largely taking place in Britain, Ryunosuke and Susato immediately feel like fish out of water. Having lived in Japan their entire lives, visiting Great Britain in its Victorian Era feels imposing, and a sense of intimidation permeates throughout the games, even in the designs for various characters like van Zieks and Lord Stronghart.

Perhaps the most surprising thing, though, was the fact that the games kept drawing attention to our main protagonists being outsiders. The first game establishes that Japan and Britain have just entered a new alliance, and the English characters never fail to jab at our protagonists or at least point out their ‘other-ness’ in some way or another.

Some characters don’t even bother hiding their arrogance and blatantly state outright that the Nipponese people are still backward and uncultured as compared to the westerners. I certainly wasn’t expecting to experience that kind of xenophobia in an Ace Attorney game, of all things, but the game manages to avoid treading into uncomfortable territory and instead uses the other-ness of Ryunosuke and Susato to establish a heartwarming sense of camaraderie that you’ll feel invested in over time.

All throughout the games, the idea of eastern vs. western sentiments is brought up over and over again, before finally reaching a harmonious conclusion where the characters learn that the two can indeed coexist peacefully. This theme serves as a throughline for all of the cases in The Great Ace Attorney Chronicles, creating an overarching story that feels tightly written and well thought out.

In a series that’s known for filler cases that don’t really matter, this is the greatest strength of The Great Ace Attorney Chronicles. In most games, only the first and final cases truly have any narrative impact, but in this duology, they all serve to fill out the big picture. There are less important cases, yes, but none of them really feel like filler or padding, and that’s an impressive feat for a couple of very lengthy games.

The Great Ace Attorney Chronicles may just be a deviation from the main series that explores a whimsical time period with the opportunity to experiment with different ideas, but by the end of it, I found myself completely and utterly attached to its cast of characters. The chemistry between the main characters is electric, and pacing issues aside, there’s just no denying the narrative strength of both games as a complete package. Even with the absence of Phoenix Wright, The Great Ace Attorney Chronicles is a bold step forward for the series and a crystallization of what makes it so special.