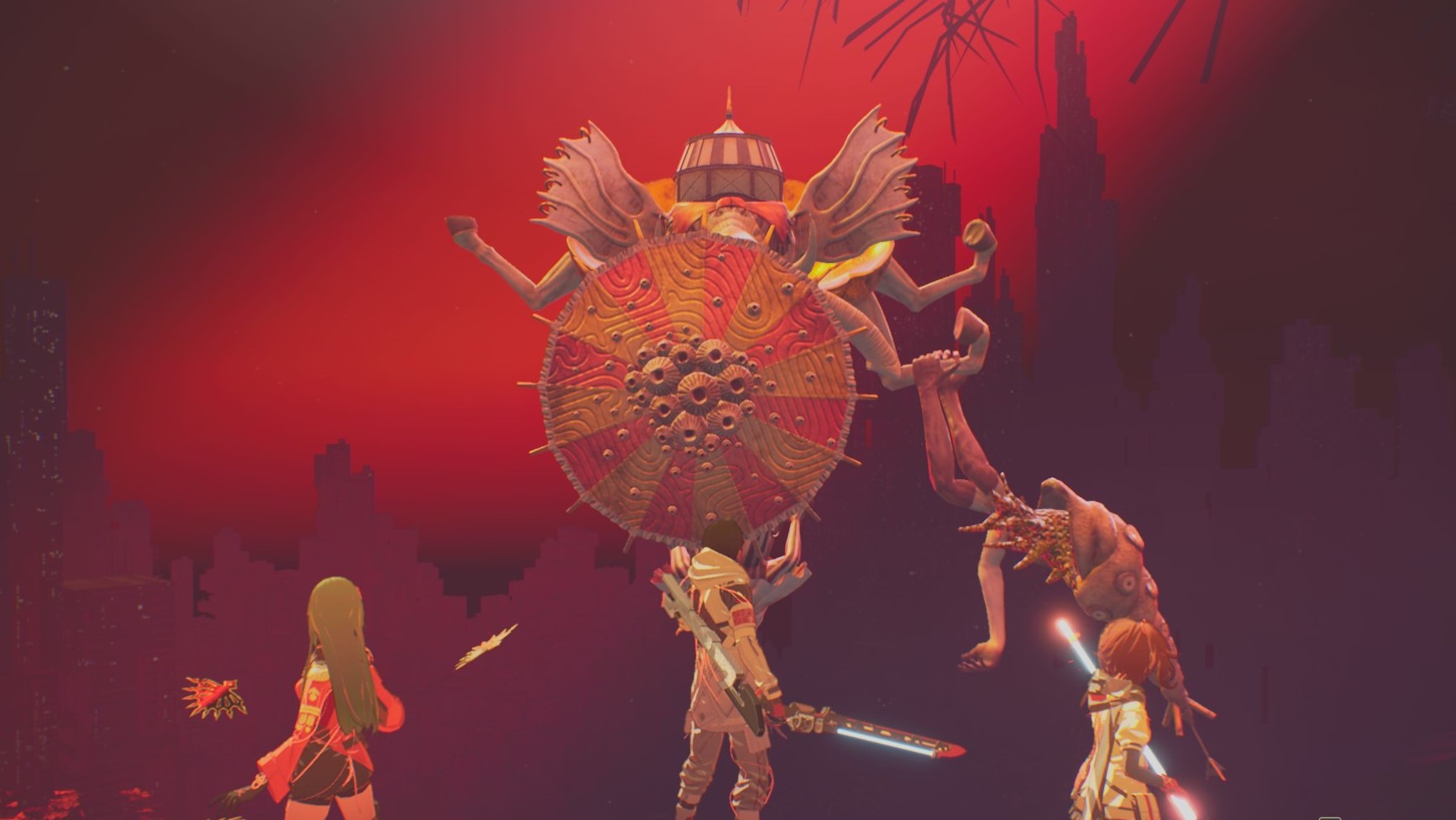 How to Beat Dominus Circus Boss in Scarlet Nexus

This boss fight is a long one, so strap in and get ready. Be sure to have as many Jelly and Team Jelly items as possible so that you’re able to heal yourself and your teammates throughout all four phases of this boss fight. Protection Plug-Ins for allies is also recommended just so that they can take more hits before going down or needing to heal.

Every phase of this boss fight is a different version of Dominus Circus with slightly different attacks and weaknesses. For this phase, your teammates will point out that most of the areas on its body are immune to any sort of damage, but you can hurt it by attacking the dish-like body part on the top half of its body. Use Psychokinesis to throw items at the dish, or you can even get up there and attack directly by using A + X on Xbox or Square + X on PlayStation to start aerial combos.

Just don’t try to attack it head-on, or you’ll regret it. It uses its umbrella as a frontal shield while shooting a stream of water at you as it attacks and defends at the same time. It also has an easy-to-dodge charge attack that comes right at you like a car. When it starts this predictable charge, use Tsugumi’s Clairvoyance to last-second dodge and counterattack. Doing this will cause the Other to fall down, opening it up to serious damage from Shiden’s Electrokinesis.

If you lure it over to the middle of the area, there will also be tons of floating debris that you can throw with Psychokinesis to create even more effective combos.

Dominus Circus will also mix in other water-based moves like a giant water wall that protects it even further. When it does this, use Luka’s Teleportation to get past the water wall and deal damage with Electrokinesis once again. Repeat this process and its crush gauge should be empty in no time, opening it up to a Brain Crush to finish it off.

When you do get close to deal damage, the elephant’s trunk will shoot straight at you like a spear. Use Gemma’s Sclerokinesis to stay safe as you approach, and try to dodge that trunk attack with Tsugumi’s Clairvoyance once again to get a counterattack knockdown. But be sure to deactivate Clairvoyance once you get the knockdown to conserve it. You’ll need it often during this phase.

At some point, this Dominus Circus will create a mist that you’ll need Clairvoyance to see through. Once you find it in the mist, you should be able to see a glowing weak spot on its head. It’ll shoot different homing projectiles at you, but they’re slow-moving and can be dodged easily. Close in with Kagero’s Invisibility, or get near the floating debris and use Kyoka’s Duplication to hammer it with multiple thrown projectiles to significantly lower its crush gauge.

It should fall to the ground as you deal damage. Once its crush gauge is empty, one Brain Crush attack should finish it off, just like the first phase.

The third phase brings back the bowl-shaped Dominus Circus from the beginning, but this time, it has a different arm. This arm will swipe at you multiple times up close, and shoot waves of air at you from a distance. Dodge the waves of air by using either Teleportation or Arashi’s Hypervelocity to close the gap and deal some damage with either Electrokinesis or Hanabi’s Pyrokinesis so that you inflict a status ailment.

When you do get close, aim for its new arm — that’s its weak point during this phase. Hitting the arm enough times will cause a knockdown and interrupt the Other’s attacks.

The car-like charge attack from the first phase also comes back, so make sure to activate Clairvoyance to dodge and counterattack just like you did before. This phase doesn’t throw too many new moves at you, so using your previous knowledge should get you through. Just remember to use Invisibility or Sclerokinesis if you’re feeling overwhelmed. Either one of those SAS powers will keep you safe for a short while.

The fourth and final phase brings all three of the past Dominus Circus enemies back as one combined form. This means that it has all of the previous moves the others used at its disposal. It’ll mostly shoot elemental waves out of its arm when you’re at a distance, which are easy to avoid.

Aim to dodge the car-like charging attack with Clairvoyance once again to make the Other fall over with a counterattack. The same phase two strategy applies when it creates mist as well. Use Clairvoyance, then hurl debris at its weak point on its head with Duplication until it falls over and provides a Brain Crush opening. Though, just one Brain Crush won’t be enough to win this time.

The water wall makes a reappearance too, so make sure to have Teleportation handy for when it does. You’ll need to react to all of the attacks you’ve already seen, but they’ll come in quick succession this time.

That’s everything you need to know about how to beat the Dominus Circus boss fight in Scarlet Nexus. Check out our guide wiki for more tips, tricks, and general info on the game.