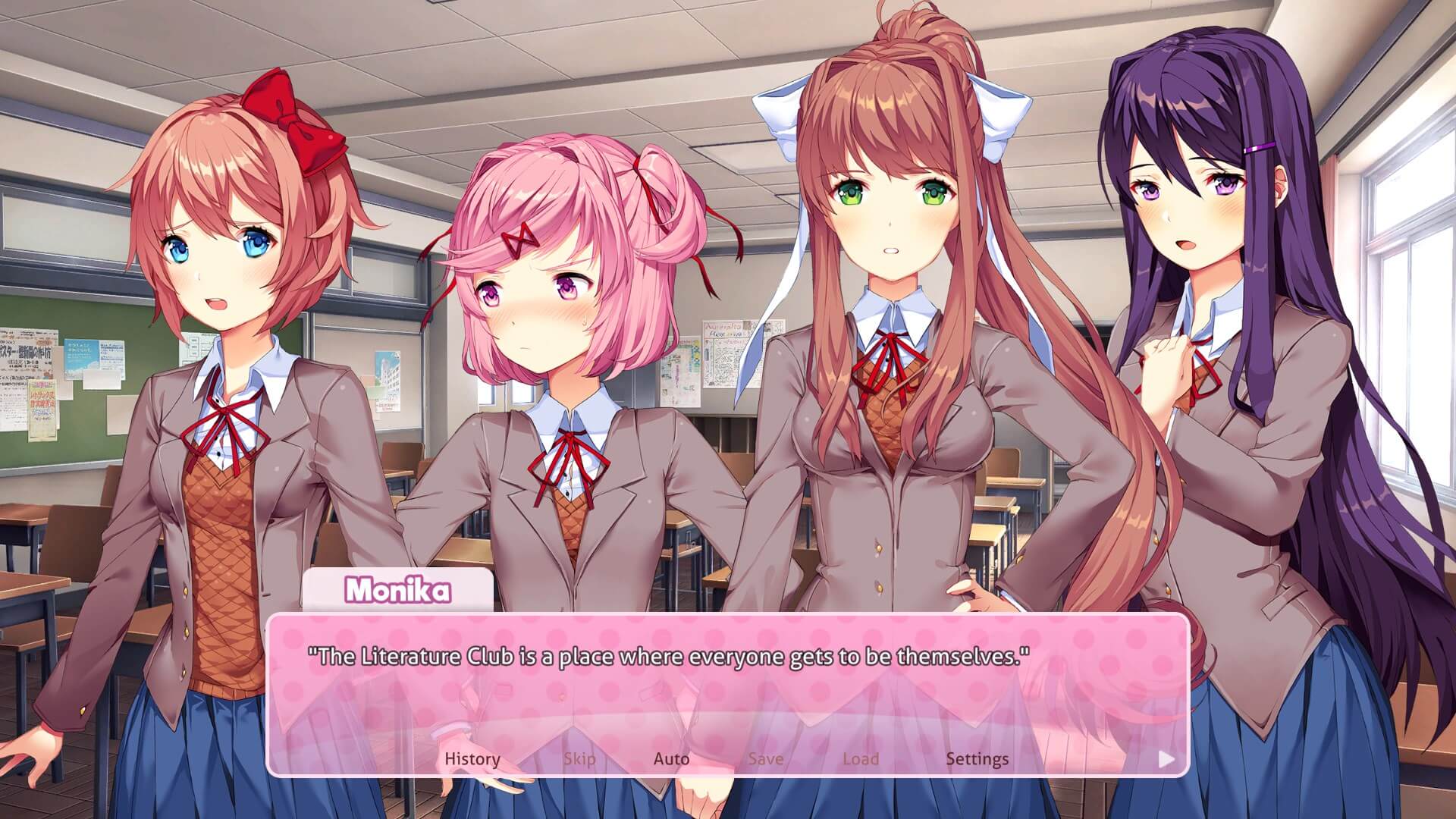 For most of the gaming world, the secret is out about Doki Doki Literature Club. Between countless theories and reaction vids on YouTube and the viral world of mouth spread when the game originally came out in late 2017, there are probably not that many people that haven’t either A: experienced DDLC, or B: at least know what the deal is after someone telling them about. Doki Doki Literature Club Plus, then, would have to come in pretty strong to justify a $15 re-release of a game that is currently free-to-play on Steam.

Fortunately, Team Salvato and Serenity Forge have come in quite strong indeed. Not only is the game now available on consoles, including the portable Switch, a significant feature in itself, but the team has added some significant and surprising new content to more than justify its $15 price tag whether you’re a new or returning player.

Spoiler warning: This article will allude to major plot details of the original Doki Doki Literature Club game. It’s recommended that if you have not played the original game, that you proceed through this review with caution or play through it once before reading this review. It’s still free on Steam.

Just in case you missed the train the first time around let’s quickly go over the premise of Doki Doki Literature Club main campaign.

You play as an unnamed main character (MC) that effectively is a stand-in for you, and will narrate much of the game. You live in a town nearby your childhood friend name Sayori, a cute girl who is a member of the Literature Club in school. She ultimately convinces you to join the club which is home to three other girls: Natsuki, Yuri, and club president Monika.

Although at first reluctant, the MC gives in and joins the club, seeing it as an opportunity to get close to one of the girls by impressing them with your poetry writing skills. In-between long dialog stints (this is a visual novel through and through), you’ll play a short mini-game every once in a while where you “write” a poem by selecting words that you think one of the three romance options (Sayori, Natsuki, Yuri) will like.

You can figure out what they like by paying close attention to their personalities which are very distinct from one another. For example, Yuri is quiet, shy, and mature and is a fan of long and complex novels; so she prefers words that are complex, as opposed to Natsuki which enjoys “cute” things, and Sayori who is emotional and prefers words that are tied to emotions, be it happy or sad.

That’s pretty much as far as the DDLC goes as far as gameplay is concerned and, as a result, the first hour or two of DDLC Plus’s main campaign isn’t particularly exciting, even by visual novel standards. The writing is a bit cringe and the characters are over-the-top tropey. However, as many would come to learn back in 2017, that is all a setup for the meat of the story.

It becomes evident as the story progresses that the characters are becoming a little… unhinged, and one by one by one the Doki girls begin to show signs of serious psychological issues which eventually lead to some seriously messed up deaths and creepy moments.

The game itself will begin to change too. Characters start glitching out, horrific poems and art will pop on screen, and the dialog both in appearance and substance just starts going berserk. It all culminates into a final fourth-wall breaking moment where the player will actually need to go into the game’s files and make changes in order to try and regain control of a game that has gone completely bananas at this point.

Doki Doki Literature Club Plus retains this entire experience, even in the console versions. I personally did not notice any major changes to the story. There might have been some small dialog changes that slipped under my radar, but by my accounts, the main campaign is effectively exactly the same as it has been since the original version released on PC.

The original experience is near perfect and reliving it, especially if you haven’t played in a while, is still a worthwhile endeavor. While, obviously, I remembered the big reveals, but re-experiencing some of the smaller but still batshit crazy and scary moments like Yuri’s eye drifting off, Sayori’s terrifying final poem, and Natsuki suddenly gaining realistic looking teeth and void eyes, felt like the first time again since it had been so long since I last played.

However, if you were expecting any major changes to the main story, such as a bit more detailed Natsuki Act 2 section – which is something I’ve seen mentioned quite a bit over the years – that does not appear to be the case. If there were any changes to the dialog or story, they were definitely not major and were subtle enough to slip under my radar at least.

Fortunately, there is a significant helping of new story content in the form of the side stories. The side stories in DDLC Plus are a total of 180 from the original game. For starters, they aren’t horror, at all, and the writing fits a consistent theme, rather than changing to suit the needs of each act in the main story.

Instead, the side stories focus on telling the story of how the Literature Club was formed and spend a significant amount of time fleshing out the four Doki’s personalities in a way that the main story just never had the time to do.

I didn’t time how long it took me to complete all of them, but it felt at least similar in length to the main story. A big part of why it felt meaty could be because of the emotional toll it took on me.

For me, someone who is a huge fan of the original game, the side stories were everything I could have hoped for. They are extremely well-written, overwhelmingly wholesome, and emotional, and give each character and character pairing (such as Yuri and Natsuki) an equal amount of time in the spotlight, and all come complete with new CGs featuring each character paired up together.

Most of them, especially the first side story Trust, featuring Monika and Sayori, are extremely heavy emotionally as the game leans into themes such as depression, self-love, respect, and more. The Dokis say out loud a lot of the negative things that cross through our minds and are there for each other as model friends. Thirteen new musical tracks added that can be heard while playing through the side stories wonderfully support the tone of each scene.

By the end of the side stories, the Dokis appear to have a bond that seems unbreakable. The main story hits different now too now that you know how close they all were to each other at one point.

The side story content is the main draw here in Doki Doki Literature Club Plus if you’re a casual or returning fan of the game. Hardcore fans, however, will likely get a kick out of the Pictures that are found in the game’s in-game Desktop – which, yes, is a thing to allow console players to mess with the game’s files as necessary

All of the game’s poems, CGs, and environment can be unlocked in the Pictures section as a collectible once you view them in-game. In addition, there are lots of other collectibles that can be unlocked such as concept art, social media art, and never-before-seen content that can be unlocked by doing specific things, such as writing a poem for a different character on each day, stuff like that. As a nice touch, you can also set one of the pictures as your desktop background if you want.

There’s also in-game music that will be added to an in-game player as you hear them in-game as well. You can listen to them at will while on the desktop and create playlists as well.

Finding out how to unlock all the collectible data in the game is a way for hardcore fans and completionists to “100% the game if they wish.

Finally, there’s also a mysterious mail inbox that can be found on your desktop where you’ll occasionally get emails from a company known as Metaverse Enterprise Solutions. The desktop app and the mail seem to imply that you’re an employee at the company. You can dig around the game’s files and you’ll come across other suspicious files. I have not figured out how to interact with them yet, but I bet someone smarter than I will start to piece together what it all means.

If I had to take a stab appears to be connected to the long-running theory that Doki Doki Literature Club is some kind of experiment and may have even darker roots than what is visible in the main campaign, and may even be connected to whatever Team Salvato is up to next.

Doki Doki Literature Club is among the most memorable, creative, and iconic horror games of the last decade and should be experienced by anyone who is able to safely stomach it. The Plus version of the game effectively adds even more valuable story content to the mix. The writing team was able to show off their skill in these side stories, and the result is a heartwarming experience that makes the Dokis somehow even more lovable than they already were.