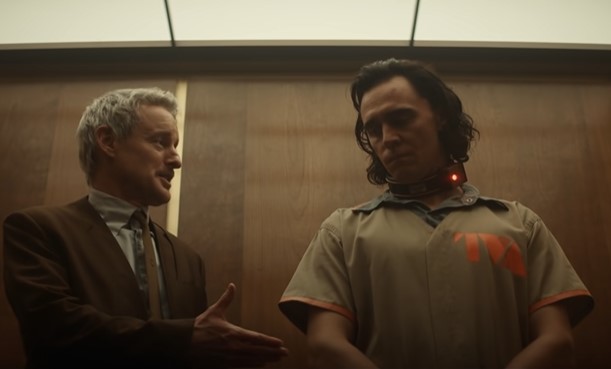 Earlier today, the Marvel Entertainment YouTube channel released a short clip of the upcoming Disney+ show, Loki. In the video, we finally see Owen Wilson’s character referred to as Agent Mobius as well as a quippy interaction between him and Loki (Tom Hiddleston).

It was already known that Wilson was cast as the Time Variance Authority (TVA) employee, Mobius M. Mobius. However, this was the first time we heard any character say the name. And for the sake of the TV viewing audiences, the character’s original name seems to have been shortened to Agent Mobius.

The trailer starts out with Mobius and Loki taking an elevator down to Mobius’ office where they will presumably discuss his time crimes. The floor listings next to the elevator buttons have all kinds of number and letter combinations along with other symbols. None of them seem to correspond to anything currently known about the MCU.

There’s also a fun interaction between Loki and Mobius where Loki denies that he loves talking. And Mobius quickly comes back by saying, “But you do like to lie, which you just did. Because we both know you love to talk.”

After the elevator, Loki and Mobius walk through a hallway where the God of Mischief and the straight-laced agent talk about the Time Keepers and their role in creating the TVA. And in turn, the TVA keeps its eye on the flow of time and corrects errors as they appear. Like when Loki escaped New York with the Tesseract.

The Time Keepers aren’t seen in this clip, but as Loki put it, these mysterious entities are three “space lizards” that decide the fate of trillions of beings throughout the universe.

At the end of the trailer, as Loki finishes his rant about the TVA and the Time Keepers, Mobius fires back quite simply with, “I thought you didn’t like to talk.”

The chemistry between these two fantastic actors is already looking incredible, but you’ll have to wait just a few more weeks until Loki debuts on Disney+ June 9. You can check out the official Loki and Agent Mobius clip from Marvel Entertainment’s YouTube channel down below