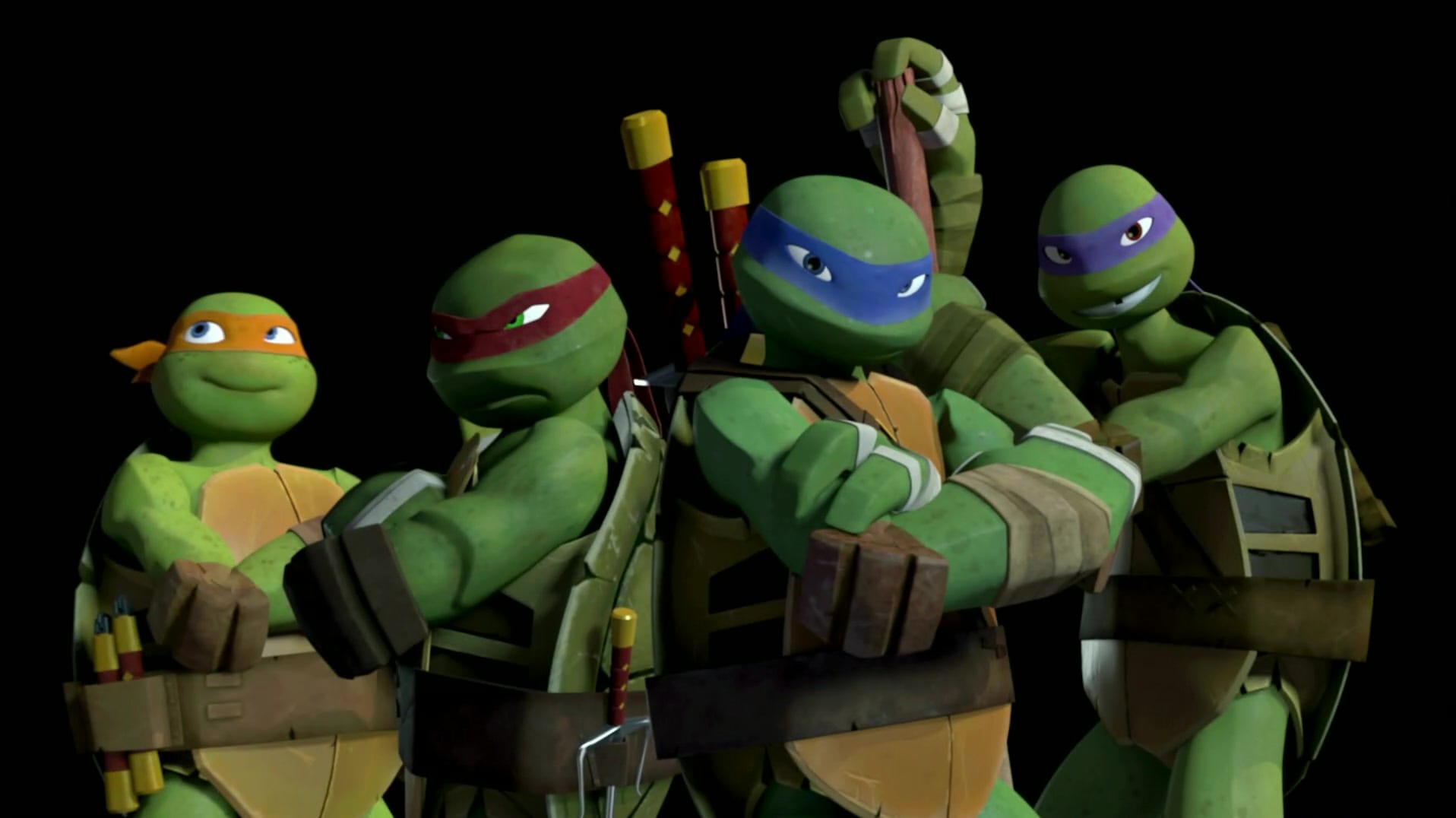 These are just a few of the phrases closely associated with the Teenage Mutant Ninja Turtles, and any of them can most appropriately be bellowed at the top of your lungs in 2021, with the retro-styled beat-em-up Shredder’s Revenge now on the horizon.

In keeping with the franchise’s penchant for alliteration, it promises some Foot flingin’ fun, and we cannot wait to get our hands dirty and just a little bit green. Some say that’s the leprosy talking, but if all but three of our fingers fall off, we’ll look even more authentic. Bonus!

Long since Eastman and Laird first doodled a quartet of incognito tortoises one fateful night in the mid-80s, fans have been at each other’s throats over who to declare the raddest reptile of them all. If one were to skew milquetoast, you could surmise that all of them are equally as fantastic, and frankly, their vibrant personalities are exactly what has kept this franchise so popular for decades.

Alack, alack… That’s not how rankings work, and so, a subset of the fandom will walk away disappointed, like so many of my ill-fated Tinder dates. If you disagree with this list, feel free to sound off with all fury in the comments. Your vitriol feeds Leatherhead’s soul, I guar-an-tee!

Oh, you thought we’d start with the familiar faces, did you? Of course not, you silly sausage. I had to inflate the word count through much more nefarious means.

Kirby, iffin you’re unfamiliar, was the additional Turtle who never got past the planning stage of a tentative fourth live action film back in the 90s. Brandishing excess fingers and toes (what a freak), he suitably sticks out like a sore thumb from the concept art alone.

Named after famed comic book artist Jack Kirby, this turtle rocked bandana a white bandana and his weapon of choice was a set of knives. None of those are in line with the established branding, and it resembles the smelly kid nobody wanted to invite to the Ninja Turtles party, who was unaware of the theme and starts to cry.

Kirby’s mom then marches to the kitchen, pulls out a pair of carving knives, instructs that he is the fifth Turtle and the most special one, before demanding that the other kids play with him immediately. It ends in terrifying, heartbreaking fashion, and one unfortunate Bebop cosplayer loses an eye.

The bane of Turtle fans worldwide. The late 90s were the teenage years for the faltering empire, and it was just as awkward and unpleasant as real-life pubescence.

To summate everything that is wrong with Venus de Milo, you need only remind people that she’s the Turtle with boobs, and that’s a phrase that should never escape the confines of a furry convention. I think she’d be more of a scaley, but now we’re arguing therian semantics.

In all fairness, Venus de Milo (aka Mei Pieh Chi) was not actually that bad of a character, fundamentally; she just happened to have surfaced during the lambasted Next Mutation series. The puppets were rubbery, the writing was grating, and instead of giving this Chinese warrior a unique fighting style as a point of difference, they settled on her being a Shinobi.

Somehow, this translated to… a ninja with magic? It’s all kinds of appropriation, and I don’t like it.

Her very existence has been forcibly erased from our memories for the most part, and she only appears in the communal discussion like some kind of boogeyman. Her most treasured book is Winnie the Pooh, in case you were curious, and yes that’s canon.

I know, I know. Slash is not a Teenage Mutant Ninja Turtle.

On the contrary, he is only half of those things — neither teenage nor ninja — and therefore, only 50% qualified for this list. In the law of total probability, that’s just enough for him to be part of the conversation, and besides, Venus de Milo wasn’t a ninja either but a Shinobi, and in Ninja Turtles lore, that’s inexplicably different.

Technicalities all across the board, I just wanted to talk about the most annoying boss in Turtles in Time. More brutish than his laidback contemporaries, big boi Slash is a simple-minded barbarian who tiptoes between the forces of light and dark.

His incentives depend primarily on whatever iteration you’re referring to, with his most infamous motivation being his beloved plastic palm tree, Binky. I was about to say you can’t make this stuff up, but I guess Mirage did, once upon a time, otherwise we wouldn’t be having this discussion.

If you hadn’t followed the fortune of the Turtles comics over the years — you lowly commoner, don’t stain the pages of my tomes with your greasy plebeian paws — you might look at the cover of the latest IDW issues with a bewildered glance.

There’s Leonardo, yep, we know him… And Mikey and Don too… There’s Raph, he makes sense… and yet, doth mine eyes deceive me? Is there a mysterious superfluous Ninja Turtle rubbing shoulders with my beloved verdant heroes? A misprint of some sort, or the indecipherable effect of afterimages? Am I on acid and simply hadn’t been aware?

No, friend! This is Jennika, a former Foot Clan member turned terrapin and basically everything poor old Venus de Milo was not. Introduced years earlier as a human ally, Jennika’s eventual transformation allowed her integration into the group to feel organic and welcome. It was a far cry from Venus’ “hey guys, I’m here too, I have spells so let’s be best friends!”

As the newest kid on the block, we don’t have a wealth of material to draw on for Jenny just yet. So far, so good, though, and we look forward to seeing whether she infiltrates other mediums beyond her home turf of IDW.

No matter who we had at #4, we were bound to draw the ire of 25% of Turtledom. Hey, need I remind you that this is the one whose name was misspelled for the first fifteen years of his existence?

Michelangelo is the comic relief, the offbeat goofball, the [pleasant adjective] [endearing noun] of the Ninja Turtles, and those who don’t bother to explore further could easily dismiss him as that and nothing more. He’s also somewhat fragile, and has had many touching storylines involving his hesitant growth and burgeoning maturity.

The problem, of course, is that there are only so many hours of airtime to go around, and as such, MC Mikey rarely gets a chance to shine in films beyond a few wisecracks here and there.

As the adage goes, ‘real ones know’, and anyone who has had a flip through the pages of the source material will discover a rich, relatable character who has more to him than just a yuk or two.

He does lose points for getting lumped with the nunchaku as a weapon. Its stylish look suits his personality quite well, and yet historically, it was intended primarily as a training tool to improve reflexes, and prior to that, a means of threshing rice.

Somewhat ignoble, no? At least he gets to call himself a nunchakuka, the apparent designation of one who practices the weapon. It also sounds like an expensive breed of dog.

Controversy! The squadron commander snatches bronze, and if you listen closely enough, you can hear an agonized shriek from the vague direction of Cam Clarke. Someone get that man a scrunchie!

Leonardo is potentially the most tragic among all of the Ninja Turtles, filled with a sense of duty that has been indoctrinated in him since he was knee-high. His virtuous, courageous demeanor makes him a natural leader, but it’s what’s underneath that keeps us engrossed.

At times, he can be something of a nebbish, doubting his own decision-making skills and spiraling into agony should he make the wrong call. He is also prone to obsession, fixating on an obstacle and doggedly pursuing victory at any cost.

All this goes to say, his skein of outward perfection masks his myriad of flaws, and it creates a compelling juxtaposition to your standard, stoic hero. His katana blades are as iconic a weapon as any you could possibly select, and he carries two of them with all of the exquisite ecstasy of someone holding two beers at once.

You can’t just rank Donatello above the leader of the damned Ninja Turtles and expect to get away without an extensive line of questioning. In fact, I think it’s literally illegal in Oregon.

Donnie appeals to the more distinguished among us. Mayhap those who prefer to keep to themselves and whittle away at their hobbies rather than engage in camaraderie. He’s the resident brainiac, frequently experimenting with some sort of gizmo or doodad, and in this sense, he’s likely the most indispensable Turtle of them all.

Think about it. You’ve got a problem that needs solving? Leonardo will probably meditate for a while, pondering a solution, only for Raphael to bust in and break it in half. Mikey might just straight up devour it. None of these are practical resolutions, especially if the issue is a leaky faucet or a bawling child.

Donnie’s an effectuator, shunning the spotlight and ‘doing machines’ with aplomb. His whacky stick of boom may not be the flashiest weapon, but its range is unmatched. Getting bonked on the noggin is sure to leave a nasty lump and/or concave gooey remnants.

He’s also the one who originally killed the Shredder, which gives him ultimate brownie points.

He’s cool but rude, and no, the lyrics never said he was crude — why do people keep insisting that? Stop. Get some help.

Much like Marvel’s Wolverine, Raphael wasn’t intended to shift into the starring role, and yet, that’s where he finds himself time and time again. He’s a fascinating, eremitic warrior who is constantly at odds with himself. Filled with rage and bluster, his temper makes for all kinds of interesting dynamics between friend and foe alike.

Subsequently, the first half of the 1990 TMNT movie was predominantly dedicated to his character development, to the point where the theme track erroneously proclaimed him to be ‘the leader of the group’. Get your shit together, Partners in Kryme, you’re misinforming an entire generation of eager moviegoers.

And of course, we’d be remiss not to mention Raph’s pair of sai (mostly because we’ve reeled off practically every other weapon so far); notorious for its blade snapping ability and allowing him to get close and personal with his enemies. Perfect for a follow up elbow strike or a stern look of disapproval.

The breath of tales covering this troubled champion has been substantial, whether he’s butting heads with Casey Jones or having half his face melted off. It’s all intoxicating content, and moreover, fun for the whole family! A hearty daaaaaaamn to the greatest Turtle of them all.

Who tops your list? Reckon Venus de Milo should get some love, or are you more of a Jennika stan? Perhaps you’ll opt for Zach, Master Ninja Turtle and the Scourge of Evil Doers, in which case, please leave immediately, you’re embarrassing yourself.