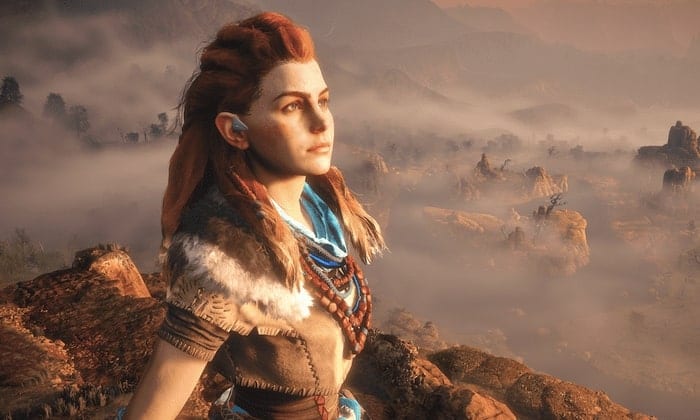 Horizon Zero Dawn’s protagonist Aloy is the next licensed character to make their way to the world of Fortnite, according to a datamine from the latest update.

Update: Aloy has officially been confirmed to be coming to Fortnite as of April 15, and will have her own bundle that can be purchased from the Item Store. The bundle will include the Aloy skin, Blaze Canister Back Bling, Glinthawk Glider and Aloy’s Spear Pickaxe harvester. There’s also a Heart-rizon Emote, a Focus effect, and finally a Shield-Weaver wrap.

All items will be available separately, but the bundle will also include the Aloy the Skywatcher Loading Screen as an additional bonus for grabbing the lot.

PS5 players who own the Aloy outfit can also get an Ice Hunter style for the skin, simply by playing Fortnite on their console.

No price has been shared as of yet for the bundle or the items separately.

The news comes via popular Fortnite dataminer HYPEX who first shared the news that the red-headed robot dino hunter would be making their way to the Battle Royale island.

Currently, few other details are known regarding exactly what the skin looks like, how much it’ll cost, and when it’ll be made available for players to purchase (or unlock).

Thanks to another dataminer ShiinaBR, we have a few tidbits of information regarding Aloy’s LTM. Currently codenamed ‘LeadAlloy LTM’ the strings found in the update files read “Team Up! Aloy and Lara.” Other strings describing the game mode read:

“Use loot from wildlife and technology to upgrade your weapons.”

“All Weapons can upgrade to legendary quality.”

“Keep an eye out for wildlife, you never know what might be lurking in the bushes.”

The LTM appears to have a large focus on crafting, with players needing to hunt down different animal bones or mechanical parts to improve the quality of their weapons. Whether or not we’ll see some robot dinosaurs roaming the Battle Royale island in this LTM remains to be seen… but we remain hopeful given that last string.

Much like the Aloy skin, we don’t yet have details on exactly when the LTM will be made available to play. We’ll be sure to keep you posted once everything’s been officially announced by Epic Games.

Fortnite’s 16.20 update is rolling out right now, adding two new bows, vehicle mods, and even a Princess Fishstick skin to the popular Battle Royale title. Are you excited about Aloy coming to Fortnite? Let us know down in the comments below.