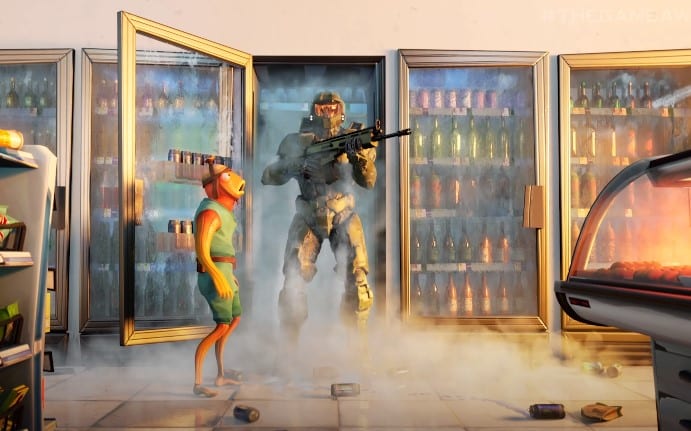 Tonight at The Game Awards, Epic Games finally confirmed the rumor that Master Chief is coming to Fortnite. On top of that two more characters from a different franchise will be coming to the battle royale title along with a classic Halo map. This comes right after the announcement of one of PlayStation’s mascots, Kratos, also making it into Fortnite.

The announcement trailer for Master Chief is brief, but effective. At the start we see Fishstick walking into a convenience store and popping open an energy drink only to be greeted by the one and only Master Chief.

Besides Master Chief coming to Fortnite, the classic map coming to the battle royale game is none other than Blood Gulch. And there was a funny little trailer that featured a couple of characters from the web series Red vs Blue along with Ninja.

This trailer only featured a cardboard cutout of Master Chief, but in no time you’ll be able to play as the real thing in Fortnite. You can check out the full Blood Gulch reveal trailer below.

The two other characters that were confirmed to be coming to Fortnite are the Walking Dead’s Michonne and Daryl Dixon. Michonne is pictured with her trademark katana but Daryl’s crossbow seems to be missing from the promotional are. However, the trailer shows him firing it at some zombies.

You can check out the full Michonne and Daryl Dixon reveal trailer down below.

And if you just can’t get enough video game reveals, then you can check out the full live stream of The Game Awards 2020 down below.