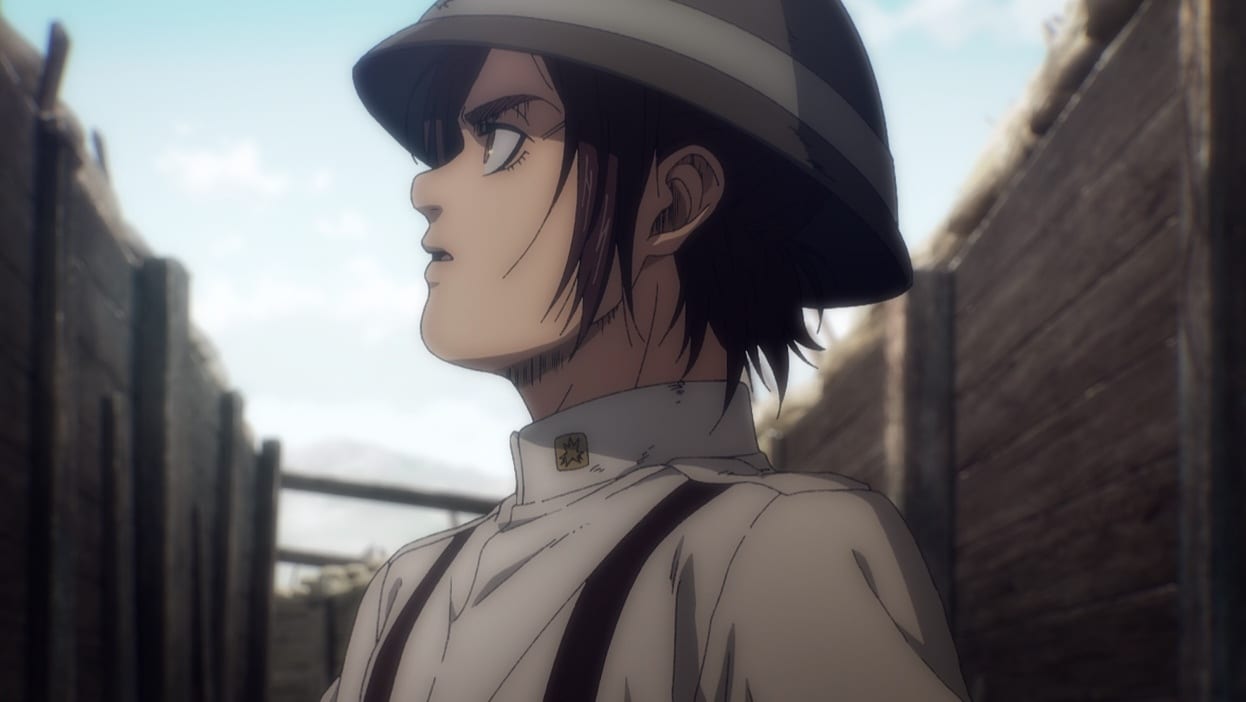 Warning! We will be diving into heavy spoilers for Attack on Titan. These spoilers include up to and through the current season.

If you haven’t seen up to Attack on Titan Season 4 Episode 2 and want to avoid spoilers, come back when you catch up. If you have, or you simply don’t mind spoilers, then keep on reading.

It has been two weeks since the debut of the final season of Attack on Titan, and the protagonists have yet to see any screentime. Instead of characters like Eren and Levi, the action so far is devoted to their enemy: the Marleyans and the Eldian Warriors and Warrior candidates they control.

On the surface, this may seem like a bad idea. Not only have we been trained to hate the “bad guys” of the series as a whole, but fleshing out an entirely new area and multiple new POV characters in the last season could make things feel rushed.

When it comes down to it, though, the progression feels right. Ever since Marley was revealed near season 3’s climax, fans have been dying to know more about the world outside of Paradis Island.

Everything has been building to the mysteries outside the walls, so developing Marely and its Eldians makes sense. It also makes the coming conflict that much more tragic.

Instead of merely enemies that we want the “good guys” to destroy, we can see that the antagonists simply live their lives according to their society and its structure. It shows that there aren’t any clear-cut good or bad guys in this war, just varying perspectives.

These episodes let us get to know characters like Falco, Gabi, Udo, and Zofia, showing that they aren’t that different from the 104th Training Corps.

They’re all just a bunch of kids trying to make their family and country proud. But to do so, they are forced into fighting wars at an age they should merely be living and enjoying life as kids and teenagers.

Gabi, in particular, is a sad character, as we see how much she enjoys the praise and adulation she gets from her friends and family for something as brutal as killing a whole train full of people. At such an impressionable age, it only makes sense she loves being commended, so the praise pushes her to pursue a life fueled by war and manipulation.

On the other hand, Falco can clearly see that they are unfairly used, but he can do nothing about it. This is on full display during the train car confrontation with Braun, who threatens him with having his whole family turned into Titans if he doesn’t straighten up his mindset.

It’s clear that Braun himself doesn’t believe the threats he spouts; he merely does so because he knows anyone else hearing Falco question the fairness of their situation would already have crucified him.

This is made abundantly clear when Braun discusses his time on Paradis to his family later in the episode, as it’s obvious he misses his friends, despite how he describes the situation and calls them devils.

So really, these character’s only choice is to chase after the goal of being turned into a Monster and used – shortening your life span to 13 more years of war – or speak out against your government and have your whole family be punished for speaking your mind.

These two episodes served to reinforce that these Eldians are born into a world that automatically guilts them for something they have no control over.

The Marley people still shame Eldians for their “devil’s blood,” which they use to justifying shaming and manipulating them into a life of servitude and indignity.

The Eldians are still forced to live in ghettos and fight in wars, yet they still barely get basic human rights. Worst still, they are brainwashed into thinking that it is an “honor” to be turned into the monstrous Titans that the military takes advantage of for their benefit.

All of this brings the show back to one of its central themes: Freedom. Both sides of Eldians have never experienced true freedom.

Eren and the Paradis Island Eldians have always been shut within walls, living in fear of the outside world of Titans that would kill them. Marley Eldians have more freedom to roam around in a sense, but every action they take is controlled by someone else.

Deep down, freedom is all either side really wants. Eren and company want to be free to leave the walls – and now island – that has pent them up for years, while the Eldians in Marley wish to be free to live their own lives and make their own choices.

Showing off these new characters’ POVs at the start of Attack on Titan’s final season, in favor of just diving into a war with them, is going to pay off in the long run. Now, we root for people on both sides, making the conflict that much more difficult and gripping to watch.