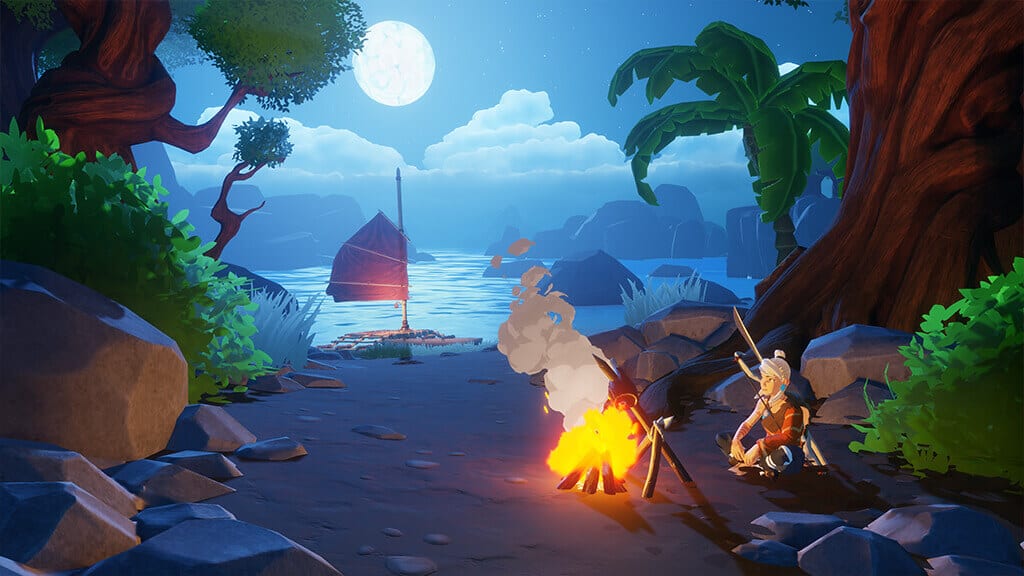 Any video game that lists Legend of Zelda as its main inspiration is sure to have big shoes to fill right off the bat. With that said, as soon Deep Silver unveiled its newest survival RPG, Windbound, it became clear that the potential to be successful and innovative for the genre with those high goals in mind was at least there.

As soon as you boot up Windbound, the art style and ambiance are on full display. The flurries of wind, deep blue raging sea, and the sheer size of the beast that pops up out of the water set up that a seemingly fantastic adventure is ahead.

Windbound’s story picks up right after Kara, the game’s protagonist, is separated from her fellow warriors after falling off her boat amidst a sea creature attack. While she eventually winds up on shore, it isn’t until after she passes through a mysterious portal-like gate.

This gate leads Kara to a land known as The Forbbiden Islands, an area spread across the open sea, harboring many strange and unique creatures, artifacts, and structures. To survive, Kara must use her warrior skills to hunt, craft, and explore.

The first chapter is all about finding your footing, as tutorials explain the basics to each aspect of gameplay, detailing everything from finding food to building a boat. While Kara starts out with a simple knife, it isn’t long until she is able to craft a bow and other more powerful weapons by finding recipes.

For anyone that likes a challenge, this is also a chapter you’ll become quite familiar with, as players are reset to it every time they die. While that wasn’t my cup of tea, it’s cool that the game has that option.

While it could have benefited from more variety, the crafting, recipe, and inventory system in Windbound serves its purpose. The system is intuitive and doesn’t take long to learn, even for someone who isn’t that into the survival genre.

Each section of the game’s main goal is to locate the three beacons and collect the object at the top. Once collected, Kara can pass on to the next section, even earning an upgrade along the way.

At first, this is a great reason to explore the entire procedurally generated area that makes up the chapter.

Exploring each of the islands and discovering new things to create is a relaxing and enjoyable experience. Most of this is due in part to the joys of traversing the sea.

From canoes to sailing skiffs, boats are arguably the best part about the game, especially when maneuvering through each section at the end of the chapters. Riding the waves and catching the wind to avoid obstacles is extremely satisfying, making you feel like an avid sailor every time you manage not to die amidst rough water.

My only gripe with sailing is that I wish that Windbound would let you adjust the UI. While the tutorial on how to guide the boat is helpful at the start, it rips you from the atmospheric moments when you see a bunch of text at the bottom of the screen.

Unfortunately, while I enjoyed Windbound’s sailing, the rest of the game lacked any real depth, most notably its gameplay loop.

First off, combat doesn’t evolve throughout, as you’ll simply use different weapons to take down bigger beasts, executing the same stab and roll technique as you progress. Yes, there are also ranged weapons, but don’t expect any revolutionary mechanics to be introduced just because you are in a new chapter.

The same lack of growth occurs when locating the beacons throughout each area as well. While it makes sense for the first three you find to be a straightforward climb, the fact the geography doesn’t drastically scale as the levels progress seems like a wasted opportunity.

Windbound is full of inspired ideas, especially when it comes to the potentially open world sea exportation. Those aspirations fall considerably short, though, as a lack of depth and creativity in its world gameplay sap the wind from its sails, leaving it adrift amidst a sea of better survival games.

That being said, if you like survival games with a good atmosphere, you might want to give Windbound a try. Just be sure to temper your expectations. Anyone going into it thinking this will be a Breath of the Wild level survival title will be immensely disappointed.