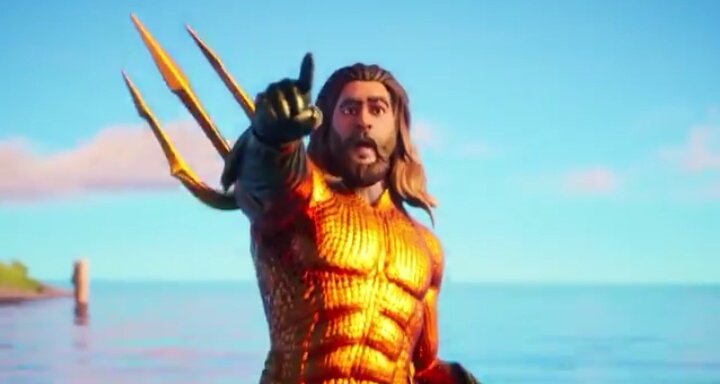 With each new week in Fortnite Chapter 2 Season 3 comes a new Aquaman challenge to complete. The Fortnite Aquaman week 5 challenge requires players to ‘Claim Their Trident at Coral Cove.’ In this guide, we’ll run you the three locations the trident will spawn at so you can complete the challenge and get the trident harvester as a reward.

As is obvious from the challenge, you’re going to want to head to Coral Cove in the northwest corner of the map. It can be found right on the border of map references A2 and B2.

While the challenge states you need to claim your trident from Coral Cove, it’s not actually the main island you want to go to, but instead three small rocks protruding out of the sea around it. We’ve circled their positions as we’re gliding in from the south on the screenshot below.

There are three tridents that will spawn in a match. One will spawn on each of the circled rocks. When you land on a rock, you’ll notice a pile of smaller rocks on top of them with the trident sticking out of the top. Interact with it to claim it.

The reason why the trident doesn’t show up in our images is because the challenge isn’t live just yet. But rest assured, it’ll spawn in these locations each game.

If you reach Coral Cove and cannot find a trident in any of the three marked locations, it’s because they’ve already been claimed by other players. Only one player can claim each trident per match, so you’ll have to be fast if you want to complete the Fortnite Aquaman week 5 challenge.

That’s all you need to know to claim your trident from Coral Cove for the Fortnite Aquaman challenges. For more guides be sure to head over to the Fortnite Chapter 2 Season 3 guide wiki.