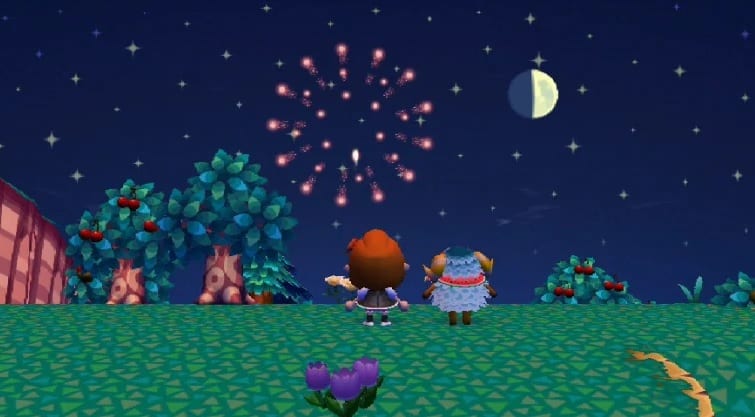 There’s going to be plenty of fun new things to do in Animal Crossing: New Horizons this summer. This morning, we got an update video outlining the new summer events we can look forward to doing in the game in July.

Swimming and diving, which were the main new features shown in “Wave 1” of the update, look like a lot of fun. These were beloved features from New Leaf that were sorely missed when New Horizons released on Switch.

At the end of the summer events trailer, a “Wave 2” was teased, letting us know that the second half of the update would be revealed in early August. There was no other information given, except one tiny hint…

There are fireworks in the background of the summer update #2 screen. Could this possibly be teasing what the August update will contain?

If past Animal Crossing games are any indication, I would say yes, this is a pretty major hint.

Every previous Animal Crossing game has had a summer fireworks event, and in the past three games, it occurred in August.

In the original Animal Crossing game for GameCube, the Fireworks Show happened on July 4, America’s Independence Day, but celebrated the opening of the town’s train station. Fireworks could be seen in the lake, but other than that, there wasn’t much to do.

In Wild World and City Folk, the Fireworks show was moved to August. Every Saturday or Sunday in August, the player could receive sparklers from Tortimer to use while fireworks were launched into the sky.

New Leaf’s Fireworks Show also took place every Sunday in August, but this time, it was a bit more interactive.

Isabelle stood in the plaza and handed out poppers, and Redd set up his shop to sell cookies with tickets inside which could be redeemed for prizes.

The best part of all of New Leaf’s Fireworks Show was that you could give Isabelle a custom design to be used as fireworks designs. It was so satisfying to see a design you created yourself being lit up in the sky late at night.

Since previous fireworks events happened in August, and we see fireworks being teased in the update announcement, there’s a pretty good chance that this is what will be in store for us later this summer.

I would hope at the bare minimum, the same features from New Leaf will return in this new update. Designing our own fireworks with custom designs felt special and made it fun to view the show on friends’ islands.

If Isabelle is involved with the event again, it would give her some more purpose in New Horizons. Let’s get her away from that desk and doing something actually useful for once.

Other updates to New Horizons re-introduced some older non-villager characters, such as Leif, Redd, and now Pascal. Maybe an August fireworks event will bring back old mayor Tortimer as a throwback to his involvement in the show in previous games.

It would also be nice to get a new series of items in the August update, perhaps fireworks-themed or something similar. Perhaps they could be recipes or rewards for helping out with the event each weekend.

No matter what the update actually ends up containing, it’s sure to be something fun to keep us coming back to the game.

While you wait for more news about the update, you can check out our guide wiki for all of the best tips on New Horizons. If you’re still on the fence about buying the game, you can read our review here.