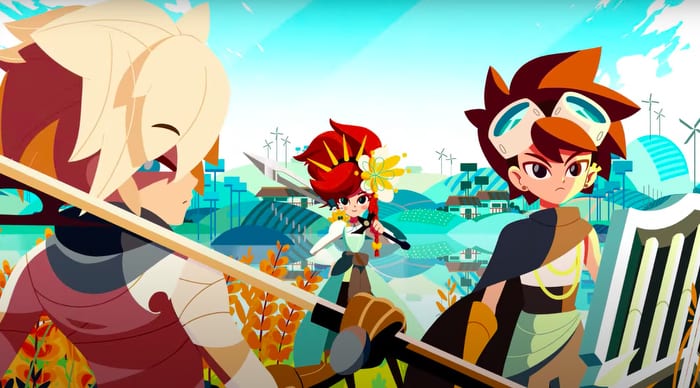 The stylish RPG Cris Tales received some time in the spotlight during the 2020 PC Gaming Show, allowing for some big reveals in terms of its release date and what it’ll be ported to.

During the second half of the show, publisher Modus Games unveiled a new cinematic trailer for the game putting its style and premise on full display. Following a brief scene of protagonist Crisbell an idyllic village, an unknown evil rains down on the hamlet and forces her to flee through time.

From there, it jumps to footage of her alongside some friends and shows them engaging in combat with monsters. With traditional weapons and small creatures capable of devastating magical attacks, they let loose on their adversaries with a vengeance.

Plus, thanks to the Cris Tales’ art style, it’s a joy to look at, with a variety of colors and fluid animations on full display for all to see. Every character model, and every movement they make, pops with life and energy.

It all culminates in the reveal that the game is set to launch on PlayStation 4, Xbox One, PC and the Nintendo Switch on Nov. 17, 2020. In addition, next-gen ports of the game are in development and are currently set for release sometime in the future.

It’s great news for those who have been keeping up with the game throughout its long development cycle, and it’s well worth checking out the full cinematic trailer down below.

A love-letter to JRPGs of the past, Cris Tales is an indie game developed by Dreams Uncorporated and SYCK. Initially revealed at E3 2019, the game has had a demo available for play on Steam which allows players to dig into its initial concept and gameplay.

Those interested can download the game’s demo here. For more on the latest announcements made during the 2020 PC Gaming Show, check out the new trailers for Mortal Shell and Twin Mirror.