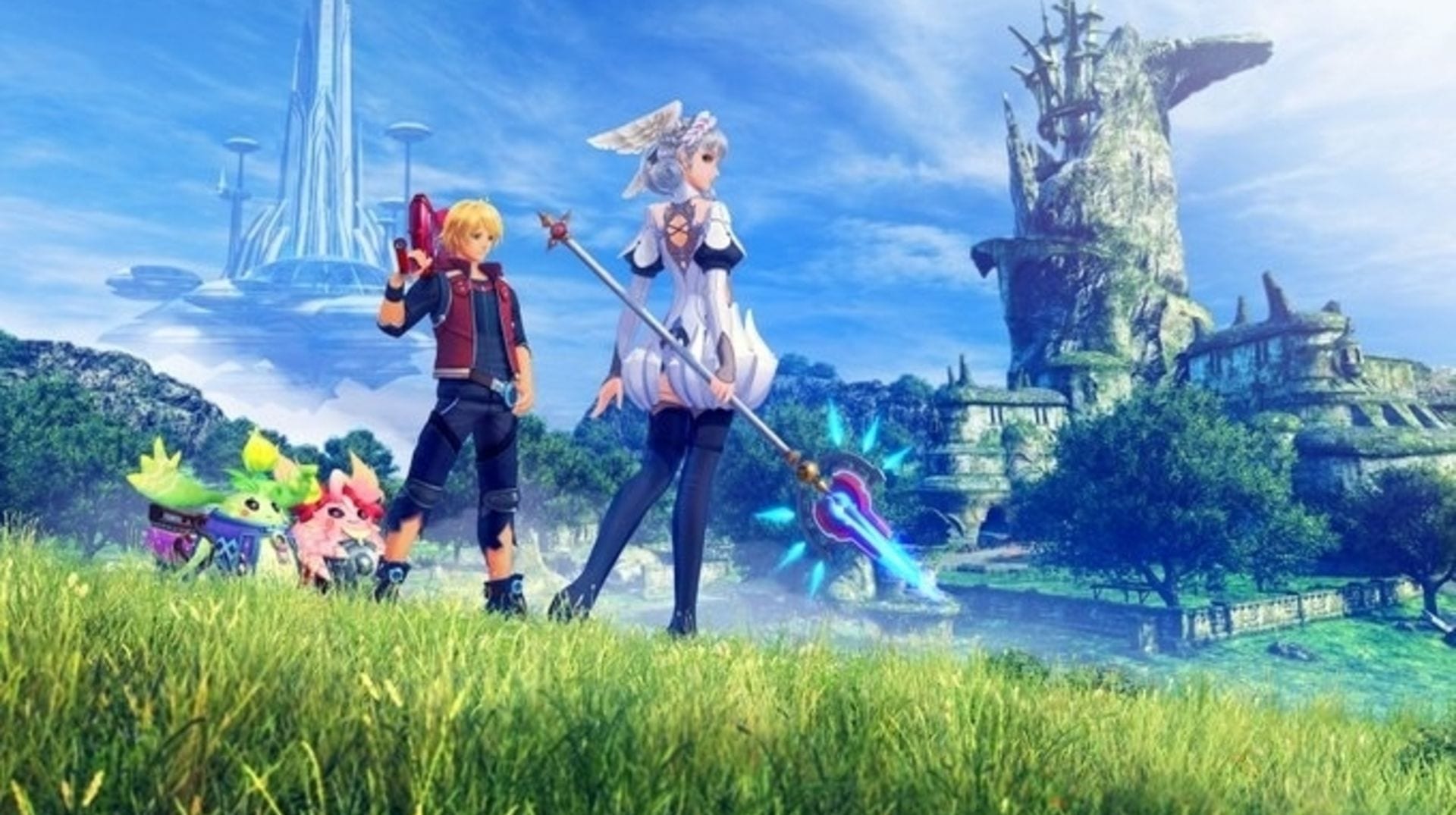 Xenoblade Chronicles isn’t a JRPG that’s going to appeal to everyone; it’s massive in scale and ambition, fitted with an MMO-like auto-battle system, and absolutely littered with things to do, big and small. For some, it’ll be a wonderland of never-ending quests to attempt and colonies to rebuild, but for others, I imagine it could come off as a tedious mess of chores.

Released for the Wii about 10 years ago at this point, Xenoblade Chronicles wasn’t a very good-looking game. Character models and the graphics in general looked muddy and blurry, menus were cluttered and the user interface wasn’t very intuitive, and it was clear the game was pushing the Wii to its limits. With Xenoblade Chronicles: Definitive Edition, it finally feels like this game has reached its true potential, even if some of its flaws still remain unresolved.

Right off the bat, the most obvious upgrade here can be found in its graphics and visuals. The character models have been completely redone, giving each and every member of the cast a beautiful sheen to them. They look much more animated and alive, and their crisp facial features are a sight to behold especially when you compare them to their Wii counterparts.

On the subject of graphical fidelity, though, Xenoblade Chronicles: Definitive Edition does suffer from the same issue that Xenoblade Chronicles 2 did on the Switch. When docked, the game looks absolutely gorgeous. When playing in handheld mode, graphics look blurrier, and the difference is definitely noticeable. Not a game-breaker, of course, but still disappointing nonetheless.

The UI and menus have been updated as well, with a much more manageable and clearer quest list that properly keeps track of what you’ve done and what you need to do next.

While I never properly got into the Wii version, it was quickly made clear to me that Monolith Soft had spent a considerable amount of time refining the game so that its HUD and menus provided more clarity to the player. In combat, things can still get pretty cluttered on the small Switch screen but at least you’re always aware of what’s going on and you know exactly which buttons to press.

For the most part, Xenoblade Chronicles: Definitive Edition is a much prettier and much more comprehensible game than ever before. If you found yourself turned away by the complex battle mechanics or the messy UI, this is a good improvement. Player’s health bars are smaller, the party gauge is more visible, everything just looks neater.

The combat itself remains largely the same; characters will auto-attack, but you can use the d-pad to cycle through battle arts that operate on a cooldown timer to inflict status ailments and other effects. With enough party synergy, you can pull off chained attacks to string combos together and inflict multiple ailments and huge damage at once.

With six playable characters to choose from, you can take control of any one of them and find the one that suits your play style the best. Whether it’s Reyn with his tanking abilities, Melia with her magic skills, or Dunban with his combo-chaining katana, there’s a pretty good variety in there that will appeal to most players. The only drawback, though, is that there’s very little you can do to control your other two party members in combat.

While playing through Xenoblade Chronicles, I found myself thinking back to Final Fantasy XII’s Gambit system — a mechanic that I definitely wish more JRPGs would adopt. You’d set parameters for each of your characters, and have them perform certain actions in different situations, like healing when someone’s health drops below a certain threshold or going full-on offensive on the party leader’s target at all times.

There’s nothing like that in Xenoblade, of course, but I was surprised to see there was no way to influence their behavior in combat either. No way to get Sharla to prioritize healing even though she was my dedicated healer, or no way to have Riki pelt the enemies with debuffs. By and large, the AI is fairly competent in most situations, but there are definitely more than a handful of instances when I wished the AI behavior could’ve been more customizable.

Oh, and if you’re not a fan of repeating combat dialogue, this game might grate on you a little. Get ready for the same shouts and grunts over and over again as you go through battle after battle. Within your first couple hours, Reyn’s passionate “It’s Reyn time!” and Shulk’s “I’m really feeling it!” will be ingrained in your memory.

Outside of combat, there’s a multitude of side quests for you to take on. Monolith Soft definitely thought ahead with this side quest system; most of them are fetch quests, but the game never requires you to go back to the quest-giver whenever you’ve collected all the items, and you can instead redeem your rewards on the spot. Going even beyond that, it’s also possible to collect all required items for a quest you haven’t even accepted yet, and the game will give you a hint about which NPCs in which locations will take the items you’ve just picked up.

That’s all very well and good, but it doesn’t change the fact that these are still mindless and quite droll. The endless sea of fetch quests and repetitive enemy-killing quests are easily the worst part of Xenoblade Chronicles, and the overwhelmingly large maps definitely don’t make it easy for you to collect all the items quickly.

On the topic of the large maps, though, while I did enjoy wandering through the open world and constantly being in awe of Xenoblade’s large structures and beautiful beasts, it eventually got to a point where traversing through these open areas became a slog as I moved from one story point to another. You can fast travel easily enough to areas you’ve already discovered, but constantly moving forward to progress the story can be a drag.

Beautiful as the Bionis is, traveling eventually becomes a routine of running forward, collecting any items you see along the way and maybe battling a few foes if they spot you. The open world is large, but ultimately devoid of life or anything interesting to actually do. It’s just a space for you to move around in; there’s a reason why this game has an auto-run function. Even it knows you’ll get tired of holding down the left stick to run through virtually empty fields.

While traveling, you’ll come across various spots where you can initiate Heart-to-Heart events between certain characters. If your characters have high enough Affinity with each other (raised through side quest completion and battles), you get to watch additional cutscenes where they talk about their pasts and what they think of their current situation. These are nice, but too often you’ll find that you need to grind a little to get their Affinity up to the required levels, if you don’t have the right items to gift to your characters.

This can be done by — you guessed it — completing more boring side quests, which are a drag. Even the ‘major’ side quests, like the one involving the restoration of Colony 6 early on in the game, are usually just a series of even more fetch quests and “kill X number of enemies” type deals. It’s a chore, and it’s a shame that this is one of the better ways to raise Affinity, especially since these Heart-to-Heart scenes give characters more time to flesh themselves out than the main story does.

Aside from all the little improvements made to the game, Monolith Soft has also added on at least 10 hours of additional story content in the form of the Future Connected story epilogue. Taking place a year after the events of the main game, Shulk and Melia (along with a few other Nopon characters) get to explore a new area called the Bionis’ Shoulder to investigate a phenomenon.

Story-wise, it serves as a nice extension of the main story, and provides more closure to Xenoblade Chronicles and its cast of characters. Gameplay-wise, it also makes some changes. Chained attacks are replaced by all-out attacks for the party, though it still uses the Party Gauge, and you can also recruit Nopons to fight for you along the way.

The side content in Future Connected mainly revolves around you trying to track down several different Nopons who can help you in combat in different ways; red ones excel at offense, blue ones help to heal, and the yellow ones deal with buffs and debuffs. It’s an interesting change-up for the combat system, but after spending tens of hours with the main game, I found myself wistfully thinking about the dynamic systems of the original system when you had all six (give or take) solid characters at your disposal instead.

The good news is that the story in Future Connected is actually quite decent, and without spoiling anything, it gives the relationship between Shulk and Melia a little more depth, and the game is all the better for it. Xenoblade fans who have been looking for more to do within this fantasy world will be happy with Future Connected, especially if you were also looking for more character development from Shulk and Melia in particular.

At the end of the day, I remain conflicted about Xenoblade Chronicles as a whole. Despite loving the combat system and all its complex intricacies (Arts! Skill Links! Affinity!), as a game it just feels ridiculously bloated. With a story that’s just of middling quality, at least in this reviewer’s opinion, all it has going for it is a solid combat system, and a huge open world with pretty sights but nothing interesting to do.

Fans will love everything that Xenoblade Chronicles: Definitive Edition has to offer; Future Connected is a solid epilogue, and the quality-of-life improvements in the main game help make it a more palatable experience. But for the newer players, unless a good, solid combat system is all you need for your JRPG experience, this might be a tough one to recommend.