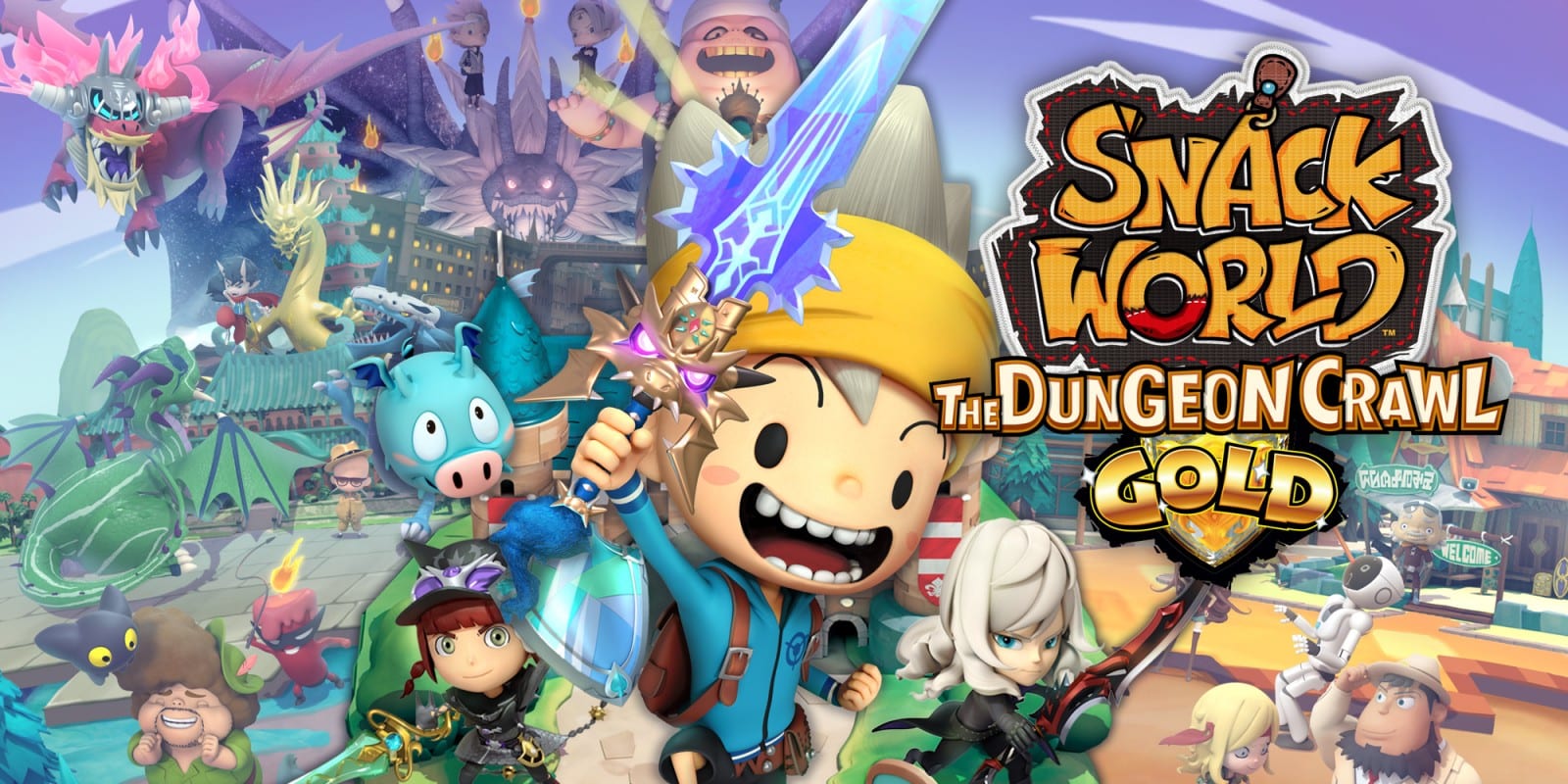 Snack World: The Dungeon Crawl – Gold is difficult to quantify. At times, it is a fun, kid-friendly gateway into the world of dungeon-crawling, but other times it is raunchy and boring. The result is a rollercoaster of an experience —full of ups and downs.

If you never heard of Snack World, you’re in good company. However, the game is a multimedia giant (in Japan) and is helmed by Level-5, a company best known for Professor Layton, Yo-Kai Watch, and Dragon Quest VIII.

Snack World is what would happen if you mixed medieval fantasy tropes such as dragons and orcs with smartphones and convenience stores, shoved them into a blender, and set the machine to puree. The protagonist of this series is a boy named Chup, who is every young, impressionable hero ever made. He has half a decade worth of adventures under his belt, so you would expect him to be the game’s main character, right? Nope. The star of Snack World: The Dungeon Crawl – Gold is a completely unrelated (and amnesiac) character I created at the start of the game.

On the surface, Snack World: The Dungeon Crawl is baby’s first dungeon crawler. It simplified the experience and split areas into small, bite-sized adventures that felt like mobile game missions. This was an unfortunate but understandable holdover from the original version of the game, which was released exclusively in Japan for the Nintendo 3DS.

Some missions were solo only and let me team up with allied monsters (who are clearly suffering from Stockholm syndrome since many were enemies pummeled into submission), but a few side missions were designed for multiplayer. These side quests let the game shine since they let me delve randomized dungeons with allies in search of loot, the meat of any good dungeon crawler.

Now, combat in Snack World: The Dungeon Crawl was as simple as the mission system. I could take weapons such as axes, bows, daggers, and swords into battle and use simple combos to whack enemies until they went poof.

The most complicated combat got was worrying about enemy weaknesses, as different weapons are more efficient against certain enemies. For instance, whenever my sword dealt 5 damage per hit to an obese ophidian, I swapped to an axe meant for ravaging reptiles and dealt 30 damage per swing. However, not all axes were adequate at assassinating asps, while some later swords specialized in slaying serpents.

Moreover, each weapon came with two abilities: one special ability and one super attack I first needed to charge up. All attacks used stamina points, so if I spammed a weapon’s special ability, I quickly lost all the stamina points and had to swap to a potentially weaker weapon. It’s a neat system that encourages resource management and preparation.

Unfortunately, Snack World’s cracks started to show when I examined the game’s loot. Enemies weren’t weapon pinatas; they dropped one item at most, and never once did I encounter a shiny wand that turned enemies into roast chicken.

That’s not to say the game didn’t feature tons of loot, but most of it was relegated to food that provided temporary buffs and materials for crafting armor and upgrading items. Whenever I wanted a new weapon, I had to buy it at the weapon shop or hope to find it in chests scattered throughout the dungeons or at the end of every mission. If I didn’t find the weapon, I basically had to suck it up, play the mission again, scrounge together enough money to buy the weapon, or soldier on with my old equipment.

This system resulted in every dungeon crawler’s worst nightmare: item droughts. I encountered stretches of game where I was stuck with the same weapons and armor because nothing new dropped from enemies, and store-bought items were too expensive. I lost track of the times I literally crawled through dungeons in pursuit of a shiny new sword, only to be met with a result screen that offered materials to craft armor I already owned.

The disappointment was beyond palpable.

Luckily, Snack World: The Dungeon Crawl didn’t punish me for using old equipment. In truth, it was easy to level up in the game and snowball my way to victory with increased stats. Moreover, each level increased all my stats, and I could occasionally improve predetermined factors such as elemental resistance.

Normally, I would praise this simplicity, as specializing in one or two stats to create character builds is too complicated for most dungeon crawler neophytes and young children. However, that would imply Snack World: The Dungeon Crawl is appropriate for kids, which couldn’t be further from the truth.

If you judged Snack World: The Dungeon Crawl by its cover, you would assume it is a cutesy game full of food puns and wholesome characters, and for the most part it is. Everything in the game is a pun, from the bees shaped like the letter B to a robot with an extendable nose named P-gnocchi-o.

Admittedly, not all puns are created equal. I appreciated the Gorgonzola Ruins since they housed a Medusa-like boss (Medusa is the most famous of the Gorgon sisters from Greek and Roman mythology, and gorgonzola is an Italian cheese), but I despised the hammy Ogre Actors. And then there was the scatological squid called the Krapen.

You didn’t misread that last part. In the second chapter of the game, I obtained a miracle skin cream that, in a plot twist, was nothing but squid shit. And yes, characters sneaked in shitty puns (the literal kind) during this chapter, and the Krapen’s theme song was all about pooping.

Snack World: The Dungeon Crawl is kid-friendly my ass! Well, maybe it is in Japan (it received an age rating of CERO A, which means appropriate for all ages), but not in the US.

But that’s not all. folks. Snack World featured status effects, some kid-friendly like slippery (makes you slide around the ground) and gassy (damages nearby allies), but it also included adult-themed ones such as hammered (makes you immobile) and masochistic (lets you recover some health when damaged). And then there’s the genies. If you have one in your party when you become slippery, they state you’re “lubed up.” ‘Nuff said.

These mature references and lines stood side-by-side with references and meta-humor that were obviously aimed at kids but probably wouldn’t make them laugh. I’m talking about living brass instruments described as “YouTubas” in their profiles and a cafe called “Covfefe Cafe.” These “jokes” left a sour taste in my mouth because they tried to be funny merely by being references, not because they referenced anything that’s actually funny.

Many of Snack World’s jokes were performed via enemy death cries or chatting NPCs, and they fell flat every time. Each time I killed a zombie pig warrior called a Pork Chop, it uttered the same death cry of “My ribs are spared!” It wasn’t funny the first time, and it wasn’t funny any time thereafter. The only thing worse than a bad joke is a bad joke repeated ad nauseum.

I can only recall one joke in the game that made me laugh out loud, but I forget if I found it funny because it was genuinely hilarious or because it wasn’t a joke that relied on a reference.

When I look back on my time playing Snack World: The Dungeon Crawl, I realize how much my opinion fluctuated on a daily basis. One day I enjoyed obtaining new weapons and exploring dungeons; the next I was bored out of my skull and wanted to stop playing forever.

Everything in the game, from the bad humor to the kinda fun combat, coalesced into a mess that I wanted to continue exploring, if only out of morbid curiosity and my love of loot. Unless you are a die-hard dungeon crawler, I don’t see this game holding your interest.