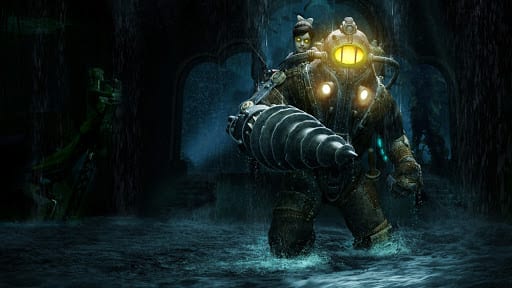 All Power to the People Upgrade Station Locations in Bioshock 2

There are a total of 14 Power to the People upgrade stations you can find in Bioshock 2. Some are easy to find, and will be littered across your path as you make your way through the main game. Others, however, can be well-hidden, and will require straying from the beaten path to find them all.

We have instructions on how to find them all below, in order and based on each area they’re found in. Keep this guide handy as you make your way through the game to ensure you get them all on your first playthrough.

There are two Power to the People stations in the Ryan Amusements area, and they’re both easy to reach.

The first is along the main path you follow to progress Bioshock 2’s story, on the way to pick up a ticket to enter Ryan Amusements proper.

After entering Ryan Amusements, continue until you reach the Security Monitoring Room, and then go into the hallway with the display case that contains the Machine Gun. The Power to the People station will be at the end of the hall.

The second station is found near the end of the Journey to the Surface animatronic tour, in the room with an entrance in the exhibit with the family sitting in a living room. It can be found in the bottom right corner of the map.

Continue through the tour until you reach this point, and then head through the door. Past it, you’ll find a Thuggish Splicer bashing the station with their weapon. Kill the Splicer, and then you can use the station for another upgrade.

Bioshock 2’s next batch of Power to the People stations are in Pauper’s Drop. There are three stations to find in the area, and most of them can be found just off from the path you follow for the story.

The first can be found in the Town Square, at the bottom right corner of the map. Progress through the story until you gain access to Fontain’s Clinic with the door code 0047. Head up the stairs inside and continue further into the building until you come to a hole in the wall directly in front of you.

Go through the hole, and then proceed along a walkway until you reach another hole in the wall. Go inside, and then the station will be directly in front of you.

The second station can be found in the back room of the Limbo Room, a section of the area found on the lower level of the right side of the map. You can use the map below as a point of reference.

Head to the Limbo Room, and then head inside and up onto the stage. Then, turn right toward an exit leading to the back of the stage. Directly ahead of you will be a sliding door. Head through it, and the station will be to the left of the door.

The third station can be found on the second floor of the Sinclair Suite, in the upper right corner of the area’s map. Note that this area will be off limits until you gain the Drill Dash ability as part of the main mission.

From the area’s entrance, head down the long hallway and through the apartments with broken walls. After exiting the apartments, head out a hole in the wal leading to a more well-lit area.

Immediately after exiting the hole in the wall, turn right and head down another hallway. At the end of the hall, turn right, and you’ll see a turret guarding a doorway on the right. Destroy or hack the turret, and then head through the doorway. The station will be on your left.

Bioshock 2’s next area, Siren’s Alley, has two Power to the People stations to track down.

The first is in the Mermaid Lounge, a building in the bottom left corner of the Little Eden Plaza portion of the map. Head toward the building through the entrance on the first floor, and then look for a staircase on the left. Head up the stairs, and you’ll be looking over a counter toward a hackable gate control panel.

Use the Remote Hacking Tool to hack the panel, and then head through the gate it opens to your right. Head straight, and then drop down through a hole into a room with a fridge and some spilled oil. The station will be to your left.

The second station is found on the way to Father Wales’ church, in the room just below the Lamb’s Office label on the right side of the map. Note that this area won’t be open until you’ve progressed to a certain point in the story.

Head toward the church until you come to a doorway with a Gene Bank to its right and another doorway with a giant red five above it. The station will be inside to the right of the doorway.

Next up are the Power to the People stations in Bioshock 2’s Dionysus Park area. There are two you can find; one easy to spot, and one that’s well hidden.

The first is behind a gate with a keycode lock in the basement section where you first enter the area. You get the code for the gate, which is 1080, from a young boy’s audio diary found further into the Park, on the stairway leading to the upper level.

The second station is on the second level, in the rectangular room on the right side of the map which contains a vending machine and a Health Station.

You’ll pass through the room on your way to meet Stanley during the Story mission for the Park, and it’ll be on the far right side of the room.

Where to Find Every Fontain Futuristics Power to the People Station

Next up are the two Power to the People stations in Fontain Futuristics.

The first is in the security booth found at the entrance to Fontain Futuristics proper. You’ll gain access after you progress through the main story mission to the point where you’ve destroyed four of Alex the Great’s signal relays.

The second station is found in the Live Test Facility, in the second section of the area. Like with the security booth, this area is unlocked by progressing through the main story.

Proceed through the area’s main mission until you come to this area. You’ll know you’ve reached it when you find and kill a Rumbler Big Daddy known as Mark Meltzer.

Look for a room with a locked door in the center of the facility. Circle around the room until you come to a broken window, through which you can shoot a Remote Hack Dart at a Door Control pad. Hack the pad, and then circle back to enter the room and use the station.

Where to Find Every Power to the People Station in Persephone

The next Power to the People station is the only one in Bioshock 2’s Persephone area, and it’s almost impossible to miss. Head through the area toward your main mission marker, and it’ll be on your left right before you reach the Main Atrium section of the map.

The last two Power to the People Stations are in Inner Persephone, and they’re fairly easy to track down.

The first is in the room Sinclair hides in during the main mission for the area. It’ll be the one that the Security Tower signs point you toward. After luring him out, go inside, and the station will be on your left past some spilled oil.

The final station is in the Infirmary section of the map. Note that this area won’t be accessible until you reach the point in the main mission where you need to go to Pediatrics to save the Little Sisters.

As you enter the area, you should see the station on your right behind a window. To reach the room it’s in, snake your way up and around to its entrance by going through Ward A and Ward B. After you do, you’ll come to an opening where a Rocket Turret will fire at you from.

Deal with the turret, and then jump into the room through the opening. The station will be on your right.

Hopefully this helped you track down every Power to the People location in Bioshock 2. For more on the game, check out our guide on every trophy and achievement you can earn (and how to get them).

How to Sign Up for the Knockout City Cross-play Beta
Warzone Season 2: All New Points of Interest Locations
Valheim: Where to Find Silver