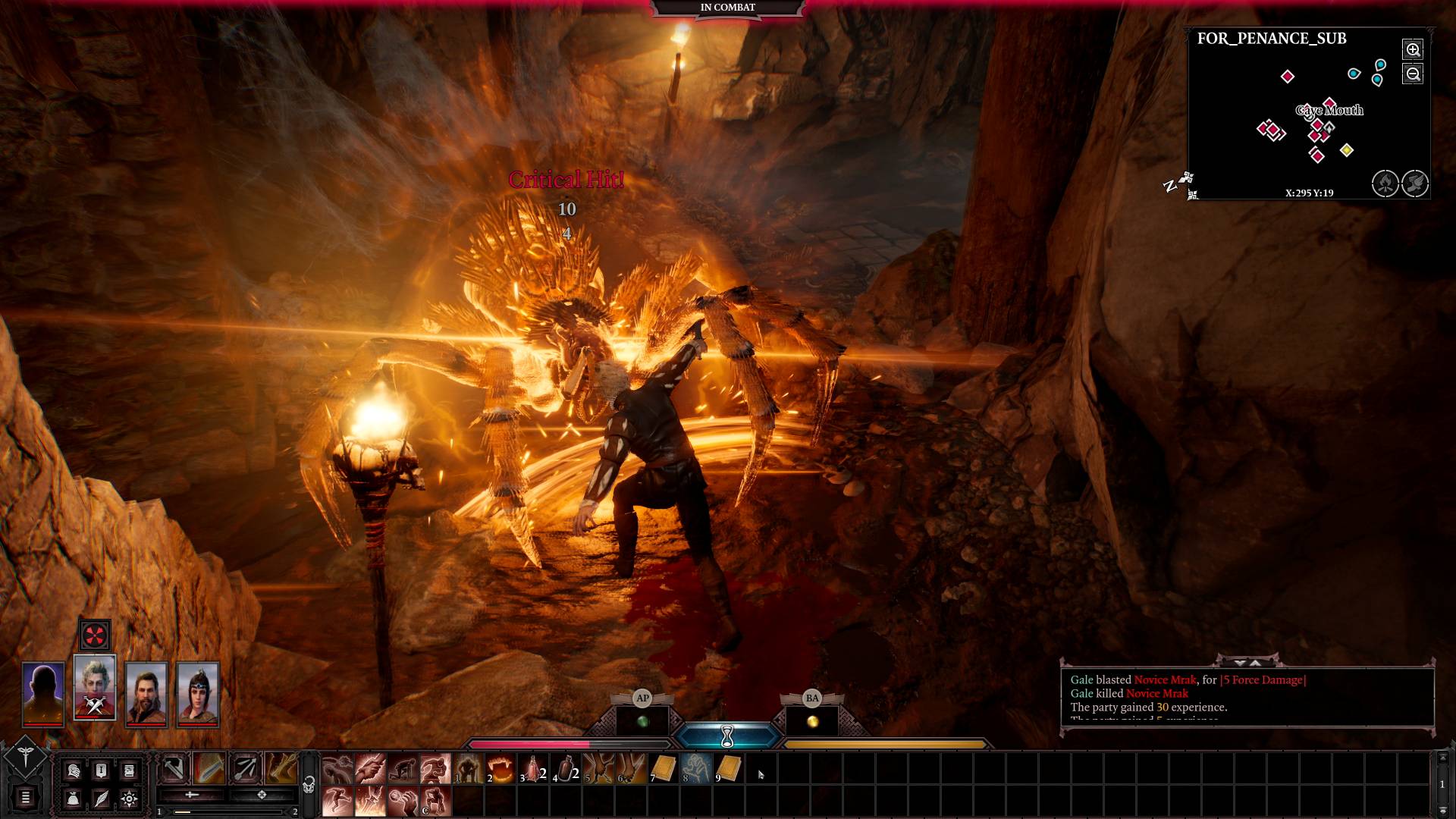 Baldur’s Gate was an important franchise to many people in or around my age group (early 30s). I didn’t really know what I was doing when I was young and playing it for the first time, but I did know I was having fun and it introduced me to the world of CRPGs. Many people are probably in a similar boat with varying degrees of loyalty to the genre over the years.

Traditional CRPGs would eventually fall out of favor, but recently there has been seeing a bit of a renaissance, and it’s no surprise then that Baldur’s Gate 3 would eventually emerge from its long hibernation.

While the announcement back at E3 was a big deal to CRPG fans, there were of course no guarantees about the game living up to its storied past.

However, the fact that Larian Studios, one of the most experienced and respected CRPG developers still around today, is taking the helm is definitely comforting.

The other day, Larian invited Twinfinite to see a roughly three hour long extended hands-off demo of Baldur’s Gate 3 and, although I wasn’t particularly worried heading into it, what I saw erased any concerns that were still rattling around.

There’s really no other way to put it than it looked absolutely ace in just about every factor that would matter to long time CRPG fans.

In an interview we conducted with Larian executive producer David Walgrave shortly following the demo, Walgrave told us that the most important aspect of the original games that he wanted to make sure was preserved was the way that players could interact with and get to know NPCs and party members. The personalities, voice acting, and the reactions all needed to be on point.

“We thought about this before we started in pre-production obviously, and we decided that the most important thing that we need to keep from the original [games] is the party aspect, the trust aspect, and the companions.

So if you talk to anyone about Baldur’s Gate 1 and 2, they’re usually going to talk to you about characters and personalities and companions. I don’t think there are many other aspects that they talk about… they just want to talk to you about Edwin, they want to say like I hate his guts or I really like that guy. Why don’t you ever pick him up?”

That was on full display during the demo. Seemingly every conversation, no matter how important or seemingly insignificant, had multiple conversation routes rich with variety, in addition to any special dialog options afforded by your character or party member’s stats and talents.

For example, the noble, roguish, evil, vampire that the presenter played as during the course of the demo regularly had the ability to tap into any of those character traits, often during dialog.

There were times where he could have lunged at a potential party member and drank their blood the very first time they met, permanently blocking them off from the story. He was able to demand that a goblin prisoner treat him with respect because of his noble origins, and regularly throughout the demo he engaged in evil actions.

Unsurprisingly considering the series’ connection to Dungeons & Dragons, role-playing is going to be a huge part of the game.

Baldur’s Gate 3 will follow the 5th Edition ruleset and, according to Walgrave, will follow the rules “95%,” only excluding things that just don’t work or make sense in a computer game.

Indeed, very frequently throughout the demo, whether it was in or out of combat, the presenter was rolling for success and, in the case of our specific presentation, failed a comical amount of times.

Whether you’re sneaking, attacking, dodging, shoving, or casting spells, everything is an under the hood stat check. Outside of combat, any time that you want to do something beyond the most basic of actions, you’ll need to roll and your chance of success will of course be determined by your attributes.

If you fail, you’ll need to live with whatever path that failed option brings to you. There are so many examples from the demo to choose to highlight this, but here’s one.

There was a moment towards the end of the demo where the presenter snuck the rogue vampire into an area with a future enemy to set up an ambush. His talent for sneaking around allowed him to safely pass stat checks and quietly reach the rafters without the enemies knowing.

Verticality is a huge part of the combat in Baldur’s Gate 3 and being able to shoot or cast spells down on someone gives you a much higher chance of succeeding than trying to whip arrows around pillars, rocks and other obstacles.

Likewise, trying to shoot up at an agile rogue that is up in the rafters is tougher than if they were right in front of you. If he failed the sneak check at any point though, the rogue would have been stuck alone in a battle with a horde of angry goblins until help could arrive, which is not ideal.

The rest of the party then came in through the front door under the guise of friendship (they were trusted and allowed in the camp to this point) and allowed the goblins (and the goblin leader who was main target) to participate in a ritual up until the point where the ambush could begin and the party could gain advantage by surprising the goblins when they least expected.

That whole approach was made feasible by the presenter using his character to convince a leader within the camp to take troops and attack a strategic hidden grove, which was coveted by that leader after providing her information about its location.

This, however, will likely lead to the death of many people of a peaceful tribe. This entire negotiation was done in private by the main character as to not anger a “good” aligned character that was in the party, whose help was needed in the battle to come.

There were stat checks galore throughout this whole process and the approach could have been widely different if certain rolls had passed or failed instead. Alternatively, the presenter could have just decided to do something else entirely at any point that didn’t involve any of the above.

All this is likely music to the ears of long time Baldur’s Gate 3 and D&D fans. Everything that Walgrave stressed as important to him: the voice acting, mo-capping, NPC interaction, roleplaying, D&D elements, etc. were all there in spades during our demo.

We have 12 or 13 writers working on this and a lot of them are seniors and they’ve made one or two more games with Larian. One of them has made Divinity: Original Sin, Original Sin 2, and Dragon Commander. So we have a lot of senior writers working on this and they are constantly doing peer reviews. We have an editor who’s also just making sure that the style and voice are always the same.

The only thing that really struck me as potentially problematic, depending on if you’re a purist or not, is the combat. Combat is played in turns like it is in Divinity: Original Sin. Every character has a movement and action bar that will decrease as they move around the battle and use actions. When all of the player’s characters have moved, the enemies will then do the same.

This is a departure from the traditional CRPG gameplay seen in older games in the genre where action happens in real-time and, if the player chooses, can usually be paused to issue commands.

Walgrave never mentioned in our interview that the combat was something that needed to be carried over 1:1 from the older games, and so with that knowledge in hand, it’s not a massive shock that they decided to stick with a combat style they are familiar with and that has been well-received. Although, it is likely that may turn off some of the most hardcore of purists.

There was so much going on in the presentation and getting to it all without having this article run comically long would be impossible, but I will touch on the story briefly. I say briefly because it’s likely that when this article is live, Larian will have already gone through with their gameplay and story reveal at PAX East. But just in case, let’s go over it.

Light spoiler warning: If you don’t know want to know anything about the plot, you can go ahead and leave now as we’re wrapping up this preview with it, although we aren’t revealing anything other than the very beginning of the game and the general premise.

Mind flayers have reappeared in the world of Baldur’s Gate, and have kidnapped and captured various denizens, seemingly indiscriminately. Size, race, good, evil, it doesn’t seem to matter for the Mind flayers. All that matters is that they are able to implant a tadpole into the mind of their hostages.

This tadpole will turn them into a Mind flayer in seven days if nothing is done. However, the longer the tadpole sticks around, the more powerful the host becomes. The power can become tempting. It offers perks such as unique dialog options which are easy to pass, and the ability to mind-meld with other infected hosts to steal their thoughts.

Also, as another example, our vampire character is able to stay in the sunlight for the first time and obviously that’s a pretty sweet perk when the sun would normally turn him to dust.

So depending on how you want to role-play, you might be in a huge rush to get this tadpole out of your head ASAP or… you could take your time and try to see some more of the new powers you gain and if, perhaps, there’s a way to control them permanently. Longtime Baldur’s Gate fans will likely recognize that this shares some similarities to the whole Bhaalspawn angle.

How that all will play out remains to be seen, but Larian has proven themselves capable of delivering engaging stories that can twist many different ways, and Baldur’s Gate 3 is the perfect game for them to put everything they have learned with Original Sin and their other previous works to the test.

I can’t think of a more perfect fit for reviving this once beloved franchise and, as long as you’re willing to have an open mind about some small modern concessions in the combat, there’s nothing else I saw the other day that would lead me to believe that Baldur’s Gate fans have anything to worry about.

Be sure to read our full interview with executive produce David Walgrave to learn more about the upcoming CRPG, and if you just want to see more screenshots, we have those too.