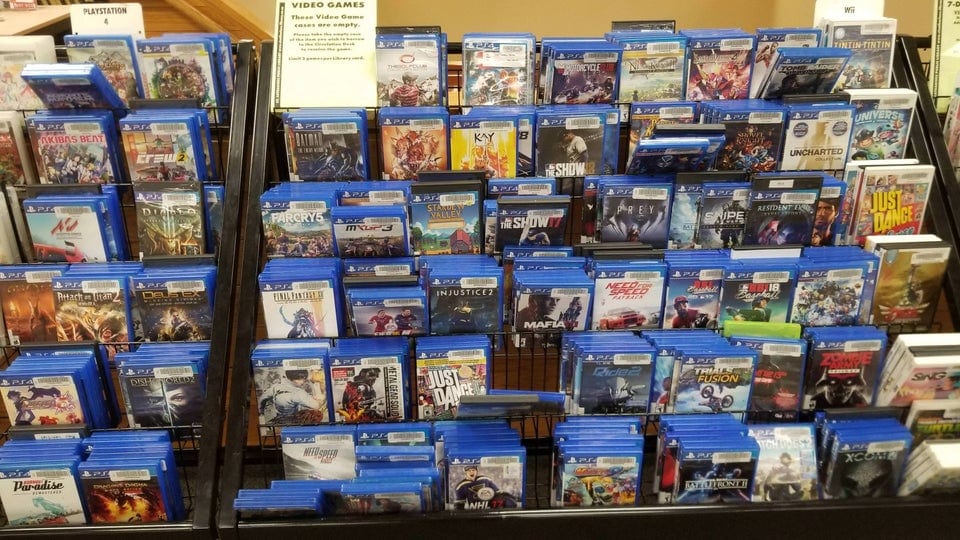 Libraries are a relic from an era where our best source of entertainment was inked words printed on sheets of numbered paper, stacked and bound between eye-catching covers, better known as books. Don’t get me wrong when I call libraries a relic: that’s a term of endearment. But I have learned to not sell libraries short, especially since they serve an important service for gamers.

When I went to college, I did a ton of research in my field, and the college library stocked all the books and journals I could want for my projects and homework. It also scanned, cataloged, and stored the majority of these resources online, which meant I could access that material from the warmth of my dorm room. While I constantly used the library’s materials, I rarely stepped inside its doors.

During my sophomore or junior year, I heard about what I thought was a strange addition to the library: the Computer & Video Game Archive. Buried in the depths of the basement was a large room dedicated to collecting video games, and students (and accompanied, affiliated children) could play any game for several hours.

Back then, I owned a dinky laptop and an Xbox 360, as well as a small library of games. Of course, I visited the archive every chance I got to play games I didn’t own, which transformed into a weekly ritual. I especially loved to play games I wanted to try that didn’t feature demos —how else was I going to play them without spending money I couldn’t spare?

After I graduated, I assumed I would never see video games in a library again. But to my surprise, I visited a local library several years ago, and lo and behold: it stocked games I could borrow with my library card.

Now, you probably wonder why I would rent games from the library when I could purchase an Xbox Game Pass or PlayStation Now subscription. Well, the answer is staring you in the face: I don’t have the spare money to buy all these game subscriptions. Simple as that.

In the past, I would visit a video rental store and borrow games, but those mostly don’t exist anymore. Even Redbox recently gave up the ghost and abandoned its game rental services.

I am fairly certain I’m not alone in this “prefer rental over subscription” boat. Plenty of other people are tempted to save money by subscribing to game subscriptions and/or buying games when they go on sale. But, it turns out the easiest gamer life hack is to visit a library and see if a game you want is available for rent; your wallet will thank you.

But the advantages of borrowing games from libraries don’t end there. Game subscription services require you to download or stream what they have on offer. This isn’t always a viable option as some parts of the country are stuck with glacial Internet speeds. And, even with ideal Internet connections, downloads can hours (depending on the size of the game), and streaming services can suffer from input lag.

However, games you borrow from a library are physical and, at least in my experience, usually well-maintained. Just pop the borrowed disc into your console, install the update (which usually takes no more than half an hour), and start playing. Easy peasy, kill that Dark Souls mimic that gave you the squeasy.

Need some more convincing? What If I told you that libraries can stock newer titles that aren’t available through Xbox Game Pass or PlayStation Now, games like Control or Star Wars Jedi: Fallen Order? And what if I also said you could rent older classics, including Mass Effect 2 and Dead Space, from libraries?

I thought that would get your attention.

Moreover, if a library carries video games, odds are good Nintendo Switch games are part of its selection, and the last time I checked, the Switch doesn’t feature a game subscription service. Of course, your results may vary depending on your library, so it never hurts to do some research first.

We have one more advantage to discuss, though: demos. Yes, if you are on the fence about a particular video game —or genre— you can basically borrow a video game from a library free of charge (late fees notwithstanding) and treat it as an extended demo.

While demos ain’t dead yet, they’re not exactly commonplace, either. Sure, you can play demos for games such as Watch Dogs 2 and Kingdom Hearts 3, but they’re in the minority. Usually, if you want to play a game, you can’t try before you buy with a demo, which is downright necessary for some titles.

Some games such as The Witcher 3 and Divinity: Original Sin 2 take upwards of 100 hours to complete; others, such as Death Stranding and Deadly Premonition, are divisive and split audiences down the middle; and then there are games like Bloodborne that take great pleasure in making you suffer all the way through a tough, but fair, challenge. How many of these games feature demos? Not one, but you can pick them up from a library and buy them later if you enjoy them.

If developers don’t release demos, and video game rental stores are all but gone, someone has to step in and provide the necessary “try before you buy” service. Plus, if you have ever been tempted to play a game but couldn’t rationalize a purchase because of its short length, just visit your local library, borrow the game, and finish it before it needs to be returned. Problem solved.

Of course, the video game rental system in libraries isn’t perfect. They only carry physical media, so digital-only titles are out of the question. Moreover, libraries usually only carry console games, leaving PC exclusive titles high and dry.

Libraries have always served an important entertainment role in the community. When CDs, DVDs, and audio books became popular, libraries started carrying them. Plenty of libraries also supply recording equipment since creating entertainment is a form of entertainment. Video games are just another evolution of entertainment, which is a cornerstone of any library.

Not every library carries video games, though, so if you live near one that doesn’t, try to convince the head librarian of the advantages of offering video games. That said, with proper game rental channels drying up and Internet speeds not keeping up with subscription models, libraries are one of the last and best bastions for gamers with shoestring budgets.