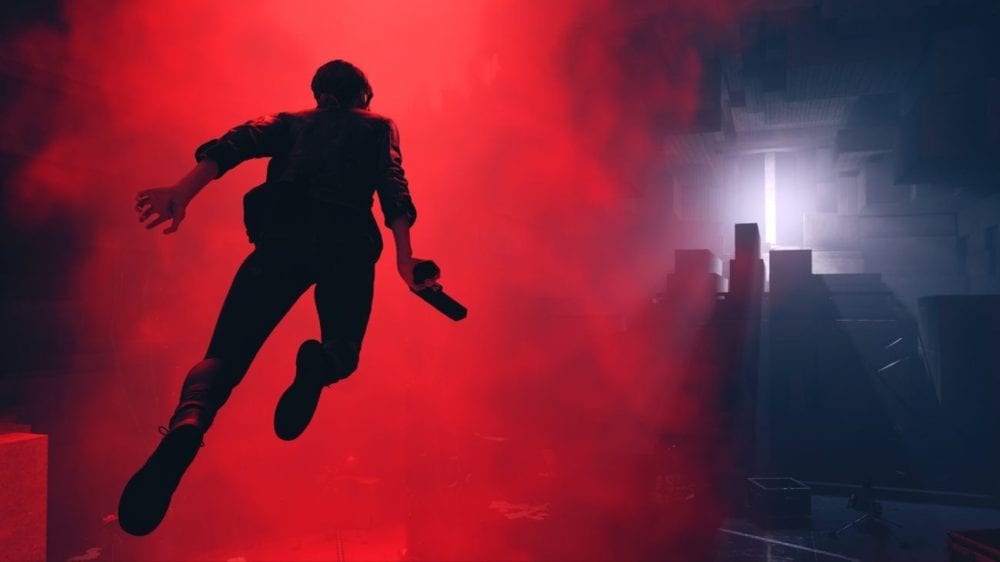 I’ve been looking forward to Control since the moment it was revealed at E3 2018. It’s another ambitious effort from Remedy that tries to be part story-driven supernatural horror, part Metroidvania, and part high-speed action combat.

The major problem that Control runs into though is that it is split in all of these different directions and it never really excels at any of them, and the result is a game that is at its core enjoyable, but suffering from problems that go hand in hand with an identity crisis.

Control gets off to a very slow start and leaves a bad first impression. Both the story, and the game’s action-heavy gameplay spins its wheels for the first hour or two.

You’re given frustratingly little information about what’s going on in this world (even by mysterious game standards) and on the combat end you’re limited to fighting the same looking enemies over and over again with nothing but a pistol for longer than you should.

Starting with the story, Control ends up in this strange, undesirable spot where it gives away too much for my liking about the big “twists” (everything related to Jesse’s brother) but leaves little questions I had throughout the story frustratingly unclear for a while.

For example, it took way too long for me to know with 100% certainty who exactly Jesse is talking to in her inner thoughts which happens constantly throughout the game. Also, what is the deal with Ahti the Janitor and “The Board”? I still don’t really know and I didn’t come away feeling like that was endearing.

Also, Jesse Faden is boring as a main character and like I alluded to above, she spends most of the game in her own thoughts. Jesse doesn’t build any relationships with anyone she meets, is emotionless a lot of the time, and doesn’t grow much as a character in spite of everything that happens to her.

I believe the expectation is that you’re supposed to read all the collectible lore entries to fully understand the intricacies of Control’s plot, but there are so many collectibles all over the place and the fluff heavily outweighs the ones that provide you some valuable information about what exactly is going on.

Going back to the gameplay now: I mentioned above that the enemies in the early part of the game are quite repetitive, this never improves. For a game that features supernatural inter-dimensional enemies, it has a surprising lack of truly extraordinary or horrific enemies.

There are times when Control dials up the horror for a few select moments such as the first couple of battles with the Hiss, select trips to the mysterious Oceanview Motel, and everything about the Fridge Object of Power side mission, but they are so few and far between.

Control’s story and atmosphere are great when it’s being eerie and even scary, but that just doesn’t happen often enough to classify Control as horror proper.

I don’t know why that is the case. All of the lore established in Control gives Remedy the green light to add whatever terrifying reality-bending stuff they wanted to but they just don’t.

For example, there was this disturbing finger puppet show for children called Threshold Kids that I would occasionally find playing somewhere. I found one early on and was excited for what other terrifying things Control had in store for me.

It never lived up to that and I was left wondering why we couldn’t have more disturbing elements in the game like the Threshold Kids.

Instead, 90% of the time you’re just rummaging around samey looking offices and hallways while fighting possessed security guards. For a resonance-based interdimensional alien lifeform, the Hiss lacks creativity.

The OST and sounds of Control don’t really pitch in much either. The game rarely leverages either to set help set up a scary mood, and for the most part, you’re just listening to the same sounds over and over.

The repeated chants from floating Hiss possessed FBC employees were creepy the first few times, but it never really escalates past that and it becomes background noise after a while.

Control bills itself as a Metroidvania inspired game and just like the horror elements, it absolutely had the foundation to be an excellent one if it leaned into it more, but it never really does.

The Metroidvania elements of the gameplay feel too optional. The story missions themselves are very linear, rarely mix anything up, and you can complete them all with minimal exploration outside of the places you have to go.

There are optional missions off the beaten path that you can discover which are fine and do add solid replay value. They usually go beyond the typical fetch quest stuff you see in similar games, and are generally well-executed, but that’s not really Metroidvania, that’s just an action game with good side missions.

I went out of my way to go back and explore after getting new abilities and the rewards were quite underwhelming.

There are Hidden Areas that were cool to find, I guess, since you get a satisfying notification that you found it… but there wasn’t really anything that cool or useful to see most of the time. Just a free ability point and maybe some crafting materials in rooms that usually looked like any other place just “hidden.”

Hiding something game-changing like secret abilities or weapons, or an intricate super-secret side mission that isn’t just thrown in your face like most of the others would have been a fantastic touch to supplement the otherwise linear campaign that is wrapped in a facade of exploration.

Control would have been better served embracing a more open-ended gameplay that removed the map markers and allowed players to progress the story at their own pace, exploring and discovering new areas using their new abilities that are teased out throughout the campaign.

Like other great true Metroidvania games, it has excellent combat (which we’ll get to soon), and an interesting setting that you wouldn’t mind getting lost in but Control never fully leverages these potential strengths.

On top of all that is the fact that Control has technical and design issues as well.

When the action gets too extreme with debris flying all over the place and bullets/rockets being fired, the frame rate can drop to pretty terrible levels. I reviewed Control on a PS4 Pro, so maybe the Xbox One X or PC versions might be able to handle it better, but even if it does that’s not the only problem.

Control has an awful checkpoint system. Your progress is constantly being saved which is great, but you can only respawn at the last control point (read: fast travel spot) you visited.

The distance between what you were doing, and your last control point stop can be quite far. If you just barely got killed in a close and difficult battle, the last thing you’re going to feel like doing is running all the way back to where you were and sometimes having to fight/dodge respawning enemies along the way.

It’s one thing if Control had old-school manual save points and that was the design choice of Remedy to make death more punishing, but that’s not the case here.

The game remembers everything you did and doesn’t make you replay it, but you still need to run back to where you were every time you die. It’s just bizarre and annoying.

The saving grace in Control is the game’s combat which is so well-executed to the point where it nearly masks all these other disappointing elements. It’s the glue that pulls the game together.

Like we mentioned earlier the gameplay does get off to a slow start like the story, but once you start unlocking all of the weapon forms and abilities combat is exhilarating and satisfying.

You can’t play Control like a traditional third-person shooter. You need to constantly be on the move, and dealing damage to generate health otherwise you’re going to be put down in a matter of seconds.

Yes you’re fighting a lot of security guards along the way, but zipping around with your dash, launching debris, floating around, ground-pounding and ripping into enemies with your Scatter (read: shotgun), never ceases to be fun.

I loved the emphasis on offense with strategic defense maneuvers like Shields and Dashes mixed into supplement the combat. I enjoyed getting right up in the enemies’ face, raining down blows to generate enough health elements (health is generated through damage), that I barely ever needed to retreat.

I modded my version of Jesse Faden and her weapons to fit this style of play. Depending on what weapon and playstyle you prefer, you could play very differently than I did such as using Levitate to find a safe place to fire rockets, debris, and long-distance piercing ammo attacks.

The game’s Bureau Alerts, a form of randomly generated combat-focused missions that persist after completing the game will send you around the FBC to take on challenging combat scenarios that will test your ability to use all of Control’s weapons and abilities.

As a result, the difficulty in Control is just right. It’s challenging at times but with superior strategy and attention to your current weapons and mods, you’re rewarded by coming out on top.

For just about every time that Control frustrated me, I found myself at least partially forgiving the game any time that I’d expertly clear out a room full of Hiss and getting the feeling of being a total badass.

And while the story is not executed as well it should have been, I still found it endearing for some reason.

Maybe the Hiss burrowed into my brain too and is forcing me to like something that frustrated me a lot of the time, but that’s a testament to how interesting the world of Control is.

The mysterious nature of the FBC’s operations, wild murderous Objects of Power, learning what exactly went down at Ordinary were all aspects of Control’s story that I loved learning more about despite that the messy way that it was all presented.

Control is flawed in so many areas, and it’s actually kind of incredible that I landed at the score that I did. While I couldn’t ignore or leave out all of the issues I had with Control, at the same time, I couldn’t pretend like I didn’t have fun a lot of the time either.

If Remedy just let Control get a little bit weirder, and fully leaned into its Metroidvania inspired gameplay, it could have been something really special.

Sadly that never happens, but in spite of itself Control still winds up being an enjoyable unique feeling action game that isn’t like anything else on the market right now, and won’t take up a ton of your time.

Should You Buy Control?

Yes, as long as you can forgive it for never fully nailing both its supernatural horror and Metroidvania elements, Control is ultimately a fun, albeit flawed action game.

Control will release on PlayStation 4, Xbox One and PC on Tuesday Aug. 27.

Control is developed by Remedy Games, the same game studio behind the Alan Wake series and Quantum Break.