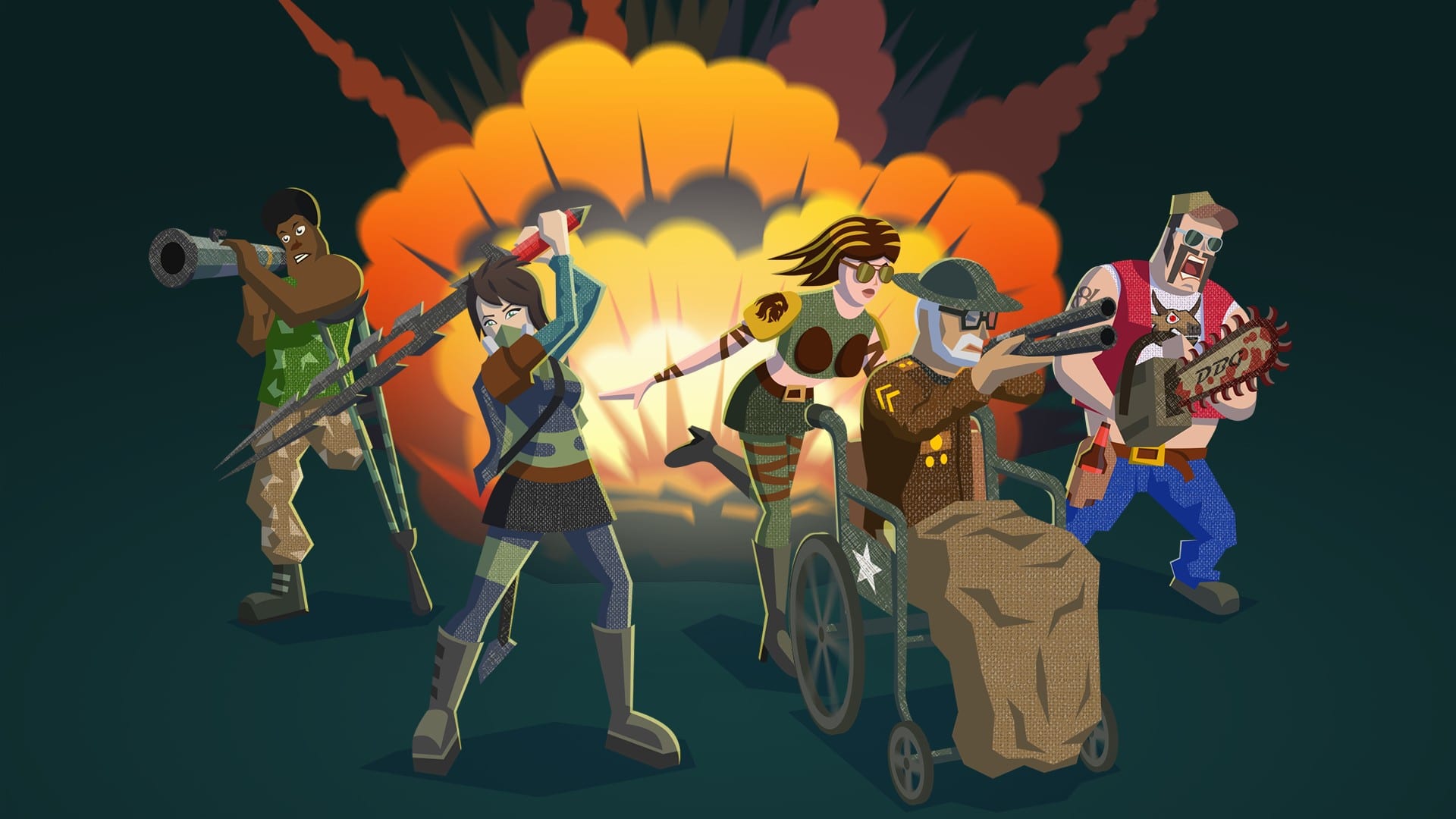 Earlier this year, Dark Blue Games asked me to preview their early access game Infected Shelter. I liked the game but found it a tad repetitive, even for a rogue-lite. While not much has changed for the final release version, there’s a lot to enjoy but the tones and themes could use a bit more development.

Now, a quick summary for those of you who never read our early access preview: Infected Shelter is a quirky, randomly generated rogue-lite post-apocalyptic 2.5D dungeon crawler where you fight zombies and the military; unlock weapons, abilities, and upgrades; and die repeatedly.

Infected Shelter doesn’t have a deep story. A scientist was kidnapped, and you have to find her. The title implies you will also build a shelter and populate it with survivors to fend off zombie hordes, but that couldn’t be further from the truth.

The game is all about wandering around randomized levels and punching zombies ad nauseum, no actual shelter building required. Infected Shelter focuses on fun and never even broaches the subject of shelter micromanagement. Consequently, I have no idea why the game was called “Infected Shelter;” however, that’s not important because I enjoy fighting zombies too much.

Combat in the game is a mindless affair (in a good way). When unarmed, you can string together weak and heavy attacks, as well as use simple two-button combos that either launch enemies into the air for extra damage or swing them into other opponents. And, if you can stun an enemy, you can execute them in a variety of ways and turn them into bloody chunks.

Infected Shelter also includes a variety of weapons, such as katanas, assault rifles, and molotov cocktails. Also, when overwhelmed, you can turn the tide of battle by using special one-off items such as healing potions and turrets.

While weapons are slower than unarmed combat and break after a few hits, their bonus damage is usually worth the trade-off, especially since many feature elemental affinities that damage enemies over time.

Plus, rarer weapons include special, almost mythical properties, such as turning enemies against one another and summoning a giant, spectral Shovel Knight.

Occasionally, you have to block or dodge attacks, but otherwise, Infected Shelter’s combat is fairly button-mashy.

Regarding elemental affinities, elemental synergy is the key to successful combat. You can always light enemies on fire and leave it at that, but if you douse them in oil first, you can double or even triple the fire damage. Infected Shelter is full of similar synergistic combos that demand exploration and exploitation.

Infected Shelter also features special abilities you can swap to fit your playstyle and situation. Each character starts with a few random powers and can gain more each run, and since abilities are based on cooldowns, you don’t need to worry about managing mana bars.

However, abilities highlight Infected Shelter’s identity crisis. Some abilities make sense in the game’s contemporary setting, such as attack drones and a volley of fire arrows, but the game also includes distinctly magical abilities, including calling down lightning and summoning an army of skeletons.

These disparate abilities are more jarring than they should be due to a lack of context.

This disparity is also prevalent in character design. The game’s enemies are generic, and not even Infected Shelter’s pretty, construction paper aesthetic can fix them. Giant, mutant zombies made of pustules and rage, black ops commandos with silenced pistols, and fat, farting zombies; if they exist in other zombie games, they also probably exist in Infected Shelter.

However, the playable characters do not share this lack of creativity. In the game, you can play as a one-legged soldier, a guitarist lady, a fat redneck (usually, those kinds of characters serve as enemies, not protagonists), and a woman pushing her father in a wheelchair. Moreover, each character features unique stats such as attack power and health.

On a side note, I know what you’re thinking, and yes, the guitarist lady plays her guitar whenever she uses an ability. Her guitar riffs summon attack eagles and conjure snowstorms, which I wholeheartedly approve of, despite the disparity.

Infected Shelter also delivers on its promise of randomly generated experiences, Each time you play the game, you will explore different 2.5D maps, fight random combinations of enemies, and find various items.

However, most runs utilize a scant few areas stitched together haphazardly, so prepare to see the same underground tunnels and forest groves repeated over and over.

Infected Shelter’s randomized nature doesn’t stop with the maps, though. Each run, the game takes every playable character, clones them twice, and randomly assigns them different bonuses via clothes and traits. Instead of picking between four characters, you basically can choose from twelve.

While clothes are interchangeable, traits can make or break a run. Some provide sizable benefits —usually with an equally large handicap— while others are nothing more than restrictions that provide an extra level of difficulty.

Moreover, the game contains no shortage of randomized loot. You will obtain and purchase runes and relics that provide passive buffs, pets that attack enemies for you, and the aforementioned single-use items and weapons. It’s all standard stuff, but it still works as intended.

However, the most important pieces of loot are the blueprints, which are Infected Shelter’s main method of progression. Some blueprints contain simple stat upgrades, such as increased health or attack power, while others let you find powerful new weapons, relics, and abilities during future runs.

Once you obtain a blueprint, you can spend one of the game’s two currencies, Infection Samples, to unlock it. Since every enemy bleeds Infection Samples (yes, even the military faction’s robots), you will probably unlock several blueprints per run.

This system sounds fine on paper, but blueprints are actually one of Infected Shelter’s few stumbling blocks. With few exceptions, all blueprints cost the same amount of Infection Samples to unlock.

It’s jarring to see a rusty shotgun cost as much as Sauron’s Flaming Mace of +5 Skull Crushing, almost as jarring as it is unbalanced.

Infected Shelter’s other method of progression is recruitable followers. While you don’t build a shelter in the game, you occasionally find survivors who, once rescued, provide special bonuses each run. These bonuses include extra abilities, a cache of one-use items, and weapons.

However, you won’t amass a huge following in a short amount of time. Infected Shelter only features a small handful of recruits; you can count them on one hand.

Plus, since the game is randomized, odds are against encountering a recruit in any given run. Even when you do, though, the game throws tons of enemies your way to minimize the chances of living long enough to free your potential ally.

The more I think about it, randomization is probably Infected Shelter’s worst enemy since you never know what items and enemies you will find.

The game throws more enemies at you the more you progress, and if you don’t find the right items and abilities, you could potentially encounter a wall of zombies that can stunlock and kill you faster than you can blink.

You can mitigate some of Infected Shelter’s difficulty with multiplayer, but the feature comes with one huge caveat: multiplayer is local co-op only.

Normally, I would love this feature, but Infected Shelter is only on Steam. Unless you own an old Steam Machine or connect your PC to your TV, you probably won’t play Infected Shelter’s multiplayer, or at least play it comfortably.

However, despite Infected Shelter’s hodgepodge nature, it is still a fun experience. Even with the aforementioned blueprint issues, the game scratches those loot hording and “one more time” itches.

However, that feeling didn’t kick in until after a few hours, after I unlocked some blueprints, rescued my first recruit, and beat my first boss. When you start out, you will probably feel as if you’re continually hurling yourself against a brick wall until luck humors you and gives you a reprieve. However, you might hit another brick wall later on that can only be surpassed with even more dumb luck.

Infected Shelter is a slow burn that both begs you to play more and taunts you with things to come. If you stick with the game and are willing to put up with inconsistent progression, you will find plenty to enjoy.

Should You Buy Infected Shelter

Infected Shelter released Nov. 11th for the PC via Steam.

Infected Shelter is developed by Dark Blue Games, a two-man indie studio that previously worked on the point and click games Silent Nights 1 and 2, as well as the gardening simulator title Fiona Finch and the Finest Flowers.