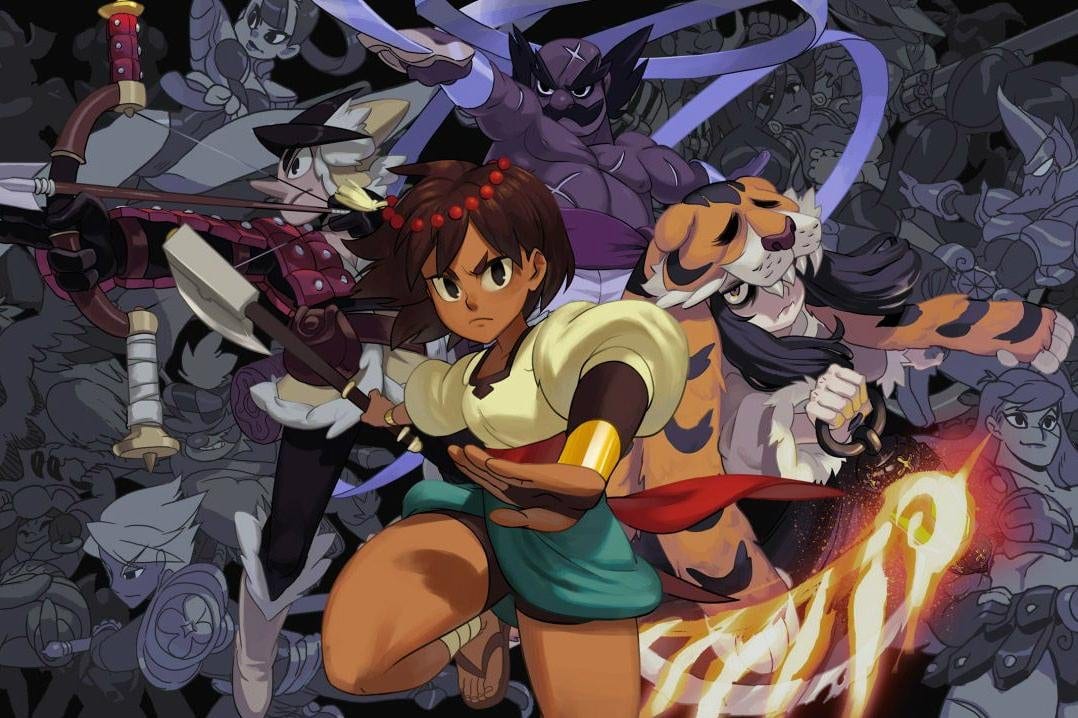 Indivisible is pretty unlike any JRPG out there, in almost every way, and that’s both a good thing and bad thing. Ever since its reveal in 2015, fans have been eagerly anticipating the RPG by the Skullgirls creators, Lab Zero, and while I enjoyed the overall experience, it has a host of small annoyances that build up.

Indivisible’s aesthetic and story is built on the foundation of Southeast Asian mythology, as well as other mythologies. You follow a young girl named Ajna, growing up in a quiet village with her father Indr.

The story setup is pretty typical JRPG fare; after a horrible event, Ajna is forced to go on a world-traveling adventure to find out the truth about herself and her powers.

Indivisible uses quite a few JRPG tropes in its storytelling, but it puts a nice spin on those with its fantastic characters. Ajna is an impetuous young girl, but one who’s immediately likable, party because she acknowledges that she’s in over her head.

During her journey, you’ll meet a host of other characters that join your party, by being sucked into and trapped in Ajna’s inner realm.

It’s a smart conceit for a party mechanic, and something the game constantly acknowledges.

Among these characters, you have some serious weirdos like the Kamen Rider knock off Naga Rider, or Ginseng & Honey, a young botanist that wears his prized specimen on his head.

Without a doubt, my favorite character, though, is Razmi, a reclusive shaman who wears her dead tiger friend’s pelt and holds his spirit in a lamp.

Razmi is delightfully cryptic and loves gross things, constantly remarking at how excited she is to see Ajna die whenever she’s in danger.

The platforming segments feel more like a Metroidvania game than a straight-up 2D platformer, and there’s a lot of exploring and a bit of puzzle-solving to do. However, the platforming is where I found my biggest issue with the game.

Indivisible controls fairly well, but a lot of the platforming in the game can be overly demanding, requiring you to have absolute exact timing.

Along your journey, you’ll unlock new abilities that allow you to reach new areas, or platform in different ways. You get a charge attack that can break through walls, the ability to jump on a spear like a pogo stick, or a higher jump.

There are a lot of different abilities and options, but the platforming can get downright frustrating at times, especially if you’re trying to find hidden items and go down alternate pathways.

While I’m all for difficult platforming, Indivisible just feels imprecise at times, requiring trial and error that quickly grows old.

What I can say, however, is that the platforming definitely gets more manageable as you unlock these different abilities.

While exploring you’ll find enemies scattered around the world, and when you run into one of these enemies you seamlessly go into the game’s turn-based battle system.

I say turn-based, but Indivisible is closer to a kind of ATB system like in Final Fantasy. Like in Valkyrie Profile, each of your four characters in your party are assigned to a face button.

Little colored spheres underneath the character indicate their action points, and each one is one attack you can use by hitting that face button. Each and every character in the game has totally different attacks and functions.

For example, Ginseng & Honey can heal the party by using their up attack, while Baozhai can store coins with her basic attack, which then strengthens her other attacks.

You can also defend by hitting a character’s button when an enemy attacks, and perfect timing will yield reduced damage.

Indivisible’s combat is super fast-paced and constantly has you interacting with it, instead of just waiting to input commands. Each character feels so unique, and it’s a blast to try out different combinations.

Combat is far and away the best part of Indivisible, but it’s not without its flaws as well. While I generally had very few issues, battles can sometimes take far too long to beat.

Enemies have an utterly ridiculous amount of health, which can really slow the game down after you’ve been playing for a few hours.

Again, I really enjoyed Indivisible’s combat and it’s a fun fast-paced spin on the Valkyrie Profile system, but there were times where it felt too drawn out.

Bosses in the game generally combine both the platforming elements and combat, forcing you out of battle at times to dodge attacks or platform around.

Supporting all of these aspects of the game is Indivisible’s fantastic sense of style. The game sports animation by the talented Studio Trigger (Promare and Kill la Kill) and it’s truly a feast for the eyes.

The different areas of the world all sport their own unique style, and the game’s unique East-Asian influences give it a seriously unique aesthetic.

I also feel I have to commend the game for the sheer diversity of its cast. There are few games I’ve played that have as much diversity in terms of race and body type, something that Indivisible actually makes effort in.

The game also features a snappy soundtrack by Hiroshi Kikuta, the famed composer best known for his work on Secret of Mana. The music of the game helps reinforce its cultural inspirations, and it’s good across the board.

A few other issues I need to cover hurt Indivisible’s overall experience. There’s a lot of backtracking in the game, and it takes a surprisingly long time to unlock any kind of fast travel options. This means you’ll spend a lot of time trudging through the same areas over and over.

At the same time, there is some balancing issues with the loudness of dialogue, and whenever you die in the platforming sections a jarring screen flash instantly respawns you on the same screen.

While I generally didn’t have any framerate issues, a couple of the larger city areas did make my framerate chug a bit. Not a huge problem for me, but there nonetheless.

The imprecise feeling with platforming, needlessly long battles, and minor technical issues are chinks in the armor of Indivisible that continuously hurt the overall experience.

It’s a good thing then that the characters and writing are so darn likable. While Indivisible’s story may start out tropey, it helps subvert those with its weird and wacky world.

Ultimately, Indivisible is an incredibly unique little JRPG that doesn’t quite live up to its grand ambitions, but comes darn close.

A few different design decisions might have helped the game in the long run, but it’s still a charming adventure worth the time investment.

Should you Buy Indivisible?

Indivisible has a host of small issues holding it back, but it’s still a charming RPG with great characters. So the answer depends. If you’re a huge platforming fan you can probably find better platforming experience elsewhere, but if you’re an RPG fan there’s a unique little experience to be had.

Indivisible launches on Oct. 8 for PlayStation 4, Xbox One, Nintendo Switch, and PC.

Indivisible is developed by Lab Zero Games, an indie developer behind the cult fighting game Skullgirls. It’s published by 505 Games.