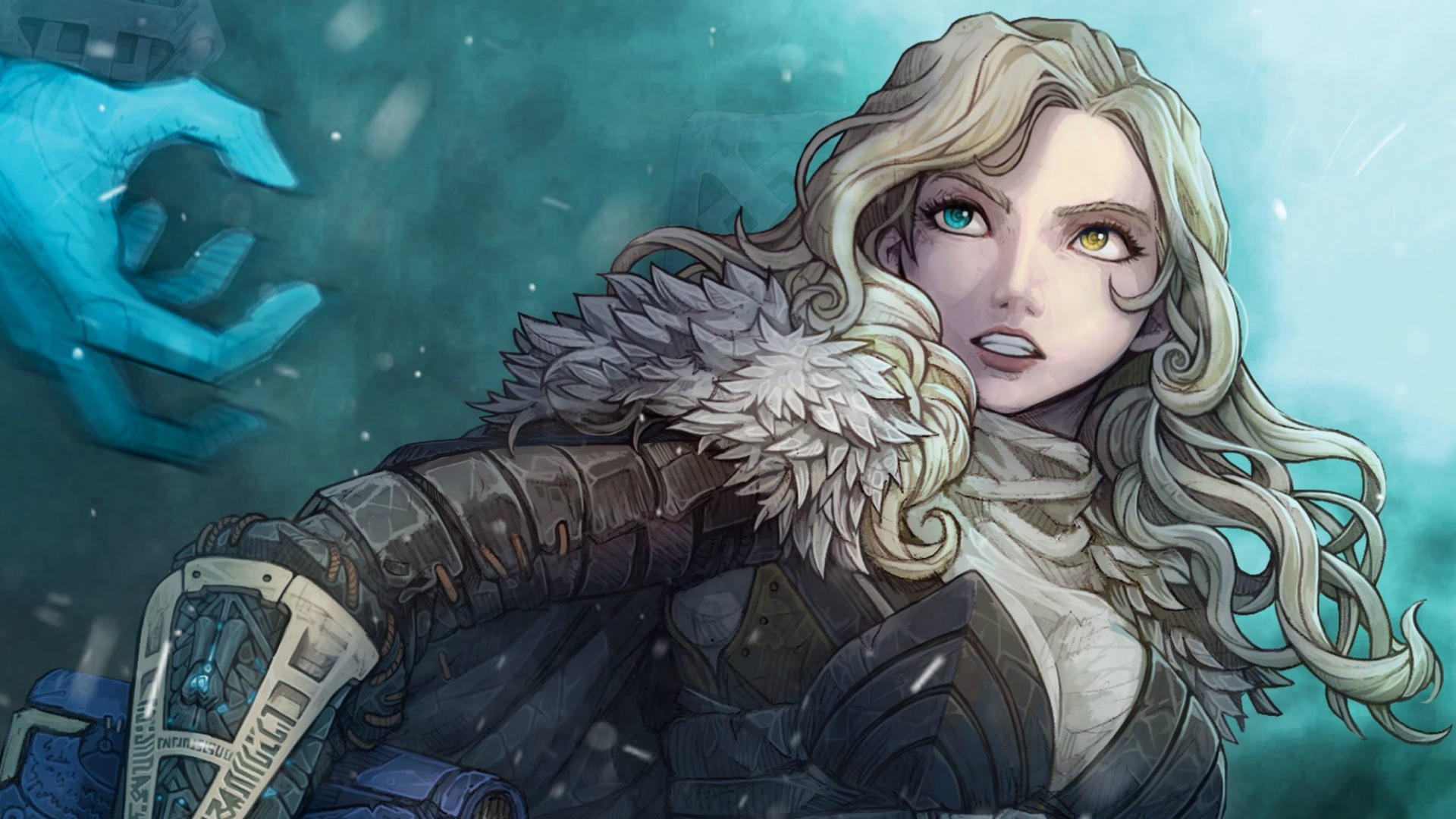 The only thing worse than a bad game is a good game that doesn’t achieve its potential. Vambrace: Cold Soul could have been a good game, but some questionable design choices leave it languishing in mediocrity.

Its a shame, because Vambrace has a gorgeous art style and an intriguing plot. The writing itself is decent enough, and I found myself drawn into the story in the opening hours.

Our heroine, Lyric, has traveled to the land of Icenaire at her late father’s behest. She eventually makes her way to Dalearch, a city under perpetual siege from an army of ghosts commanded by, fittingly enough, the King of Shades.

And it’s kind of a cool setting. Dalearch is populated by the usual D&D and Tolkien leftovers, haughty Elves and gruff Dwarves, even some sinister Drow.

Lyric is in possession of the titular vambrace, a powerful magical gauntlet, the mystery behind which drives the plot for much of the game.

Soon enough you venture out into the abandoned city proper, and it’s here that the game just completely falls apart for me.

The game bills itself as a rogue-lite, but it retains only the most annoying aspects of the genre and brings nothing new or inventive to the table.

There is permadeath, but when all of your characters (aside from Lyric herself) are one-note archetypes recruited from an infinite pool, this has no meaning.

You need to manage your resources to survive, but shops rarely have anything interesting to buy outside of healing items.

The most obvious touchstone here is Darkest Dungeon, and it is clear the developer, Devespresso Games, has been inspired by that game’s art style and combat system, which is what intrigued me in the first place.

Your various adventures will take you through a series of hallways, your party of four characters inching forward and encountering traps, events, and groups of enemies.

There can be around a dozen hallways to each area, with multiple areas laying between you and your story objective.

And while you can rest at campsites to regain health, if Lyric dies at any point you will be returned to Dalearch and be forced to repeat the entire process.

The map itself can be quite confusing, with some hallways having multiple exits. I eventually learned to constantly reference the map and the approximate location, which may be what the developers intended but feels somewhat cumbersome.

There is a knock-on effect to this, though, which I found fairly infuriating. You are given a geistometer, which detects the level of ghostly activity around you. It goes up every time you transition from one hallway to the next.

If it ever fills all the way up, then you are guaranteed to have a combat encounter in every single hallway you pass through.

I suppose this is meant to punish you for exploring, or taking too long. It’s an awful mechanic which is only exacerbated by the combat system itself.

Positioning is a big deal here, with characters in the front rank shielding those in the back, but with long-range characters able to attack with impunity.

Each character has a standard attack and two special attacks, both of which are usually quite bland. For instance, one may raise your defense for X amount of turns, but only negligibly so, and the other might debuff an enemy.

In virtually every instance, mashing the simple attack button usually was the best option. The lack of tactical depth means it gets real old, real fast.

You cannot heal in combat either, it is only possible to use restorative items at a camping ground. These are fairly common, but as any RPG fan knows, it just feels wrong walking into a battle without full strength.

You recruit your party from a pool of archetypes, and they serve different roles like tanky paladins or high damage rogues.

The issue is that no one gains levels (aside from Lyric, who kind of does), and that makes combat feel like a drain on resources rather than an empowering experience.

Because you need to make your way through such lengthy expanses before encountering the boss encounter, this makes every conflict feel like a drag.

I can’t really understand what the developer was going for with this, and I can’t think of another RPG where this is the case.

After certain story beats, Lyric will gain a perk point to increase one of her attributes. Outside of HP gains, this always felt fairly arbitrary.

The art style should be commended though, in particular, the portraits of characters are detailed and expressive.

Every generic party member has a unique look, which I appreciated. It is a shame that they are only given a line or two of flavor text to define them.

Lyric herself is given more attention. You can find around a dozen different outfits for her, some which are gained through story progress and others by exploration.

I appreciated the effort that went into these outfits, as they even change her hairstyle, with each outfit getting a unique portrait to match, although there is the typical focus on cleavage you should expect from a game like this.

Vambrace: Cold Soul is a tough sell. There are the bare bones of a good game here, but it has very little to recommend it.

It can be frustrating at times, the combat is boring and it can be a slog to get through.

The art is nice, and the story can be interesting, and that may be enough to pull you through its relatively short runtime (around 12 hours).

I think Devespresso Games were on the right track, as anything vaguely resembling Darkest Dungeon is going to sell a certain kind of gamer on its aesthetic immediately.

However, they missed the mark, and instead focused on a visual aesthetic over actual gameplay systems, which is what makes that game as compelling as it is.

Vambrace: Cold Soul falls down in almost every way that matters, and there are far better games out there more worthy of your time.

Should You Buy Vambrace: Cold Soul?

No. Vambrace is a slog of gaming experience, and your time would be better spent elsewhere.

Vambrace was developed by Devespresso Games.