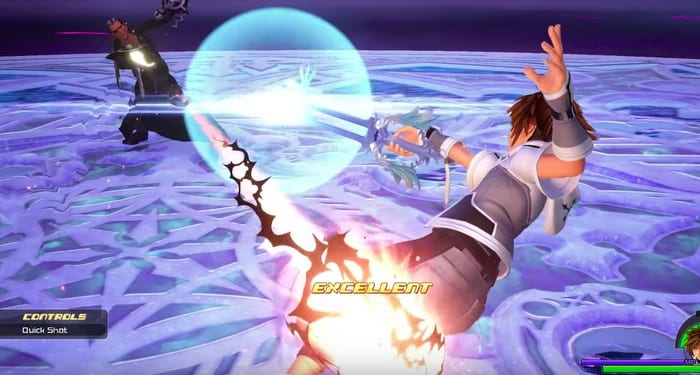 A new trailer for Kingdom Hearts III’s upcoming Re Mind DLC has been released ahead of Tokyo Game Show, and brings plenty of spectacle and style to the table.

Streamed by the official Kingdom Hearts YouTube account on Sept. 9, the trailer sees an even mix of both new cutscenes and gameplay from the upcoming DLC.

Key among the cutscenes are bits of footage related to scenes that take place after the events of Kingdom Hearts III’s initial story. Sora can be seen discussing that state of his and Kairi’s hearts with Chirithy and Naminé following his leaving to rescue Kairi from fading forever.

Chirithy notes that the situation he and Kairi are in is perilous, while Naminé appears to be trying to guide Sora through his journey at great risk to her own existence.

On the gameplay front, there are also glimpses of new boss fights Kingdom Hearts III: Re Mind will offer to players. Sora can be seen facing down an amalgamation of Keyblades and darkness, while also facing down Xigbar in a quick-time event.

The trailer likewise shows footage of familiar boss fights taking place from a new perspective via new playable characters. Axel, Roxas and Xion can be seen teaming up in an attack against Saïx; Ventus and Aqua utilize their own team attack against a Xehanort-controlled Terra; and Terra’s Lingering Will charges into battle against his own Xehanort-corrupted body.

It all caps off with a new scene between a young Xehanort and the Master of Masters, with the latter asking Xehanort how he’ll use a newfound power that could reshape the world to his liking.

It’s all about as cryptic and unclear as one would expect of Kingdom Hearts III’s story, but intriguing and entertaining none the less. Those interested can view the full trailer for themselves down below.

Kingdom Hearts III: Re Mind is currently slated for release sometime this Winter on PlayStation 4 and Xbox One. For more on the game, check out our review of the base game as well as the previous teaser trailer for Re Mind shown at this year’s E3 by Square Enix.