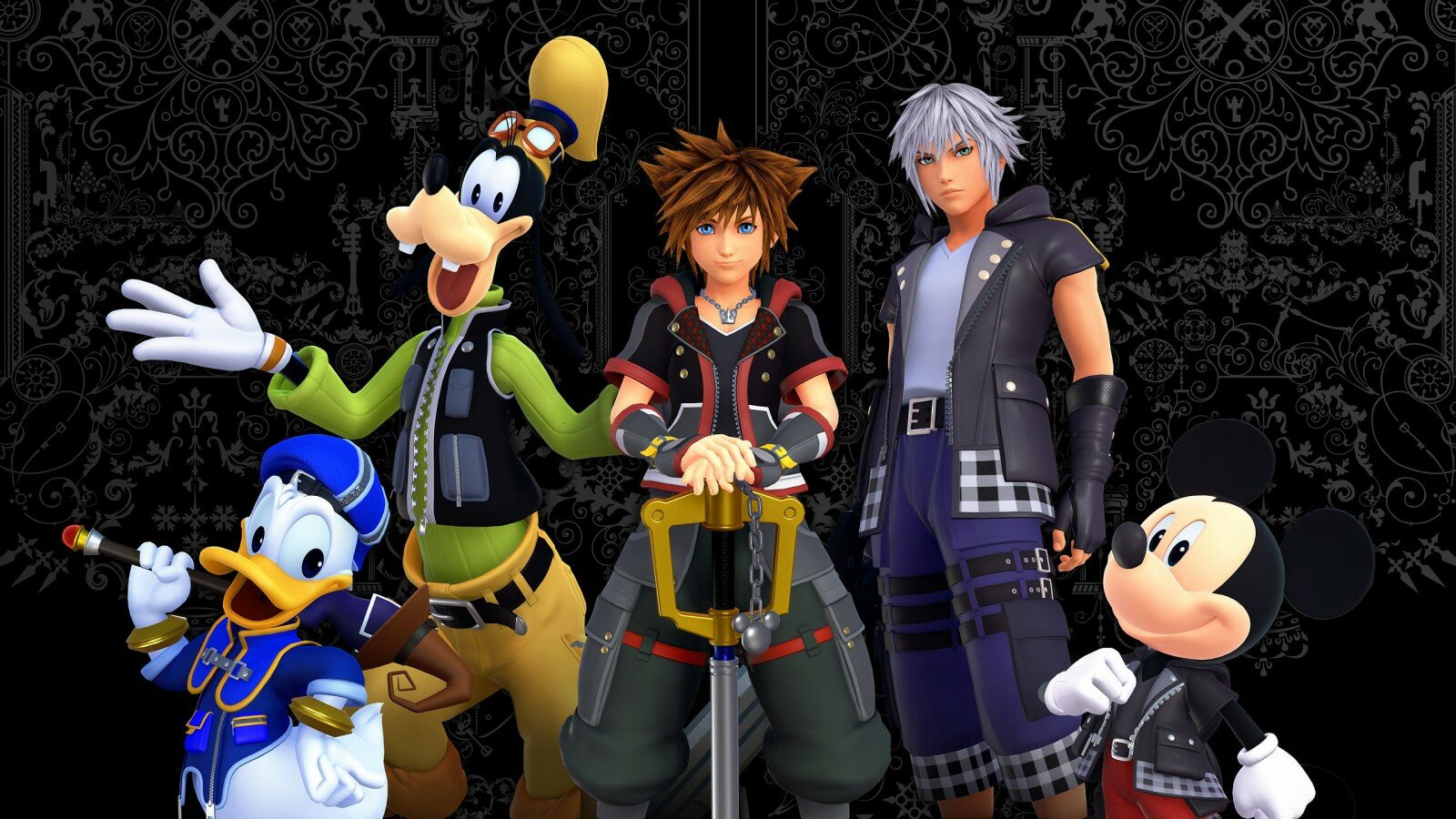 Kingdom Hearts 3 is a game that almost feels impossible to describe. It’s a finale to a complex narrative that’s been built up for over 15 years and, somehow, manages to be a satisfying end to so many disparate plot threads. It’s an astounding ode to Disney classics, that does probably the best job a video game has ever done at emulating these classics.

It’s so unlike anything else out there, you can’t draw a comparison; it’s messy, nostalgic, gorgeous, and confusing all at once.

Kingdom Hearts 3 picks up right where the last entry in the series, Dream Drop Distance, left off. After failing his Mark of Mastery exam, Sora travels to Olympus to try and regain the Power of Waking. Meanwhile, Riku and Mickey try to find clues about the whereabouts of Terra, Aqua, and Ventus, the Keyblade masters of the past.

Disney worlds are still front and center in Kingdom Hearts 3, featuring more modern classics than past games, like Frozen, Tangled, and Big Hero 6. While there are certainly fewer worlds this time around, Kingdom Hearts 3’s worlds feel grander than ever before.

Square Enix has done a stunning job of recreating these Disney worlds, down to the exact details. Like the plastic-y noise everything makes in the Toy Story world, or the seamless recreation of “Let It Go” in Frozen, or the slightly unnerving way Mike’s single eye moves in Monster Inc.

Somehow creating these worlds in Unreal Engine 4 has managed to make them look stunningly similar to their actual movie counterparts, but the real joy comes in exploring.

The worlds are much larger than that of Kingdom Hearts II, or any of the other games, and there’s a lengthy story attached to each that takes roughly three to five hours to play through. Every Disney world is incredibly detailed and comes with their own unique gameplay mechanics of minigames to help create diversity.

The Tangled world has a fun dancing minigame to play, Pirates of the Caribbean lets you sail your own ship and battle others a la Assassin’s Creed, Toy Story lets you pilot a mech suit called a Gigas. There are also unique enemy types in each world, helping to keep things fresh.

Variety has always been the name of the game with Kingdom Hearts, but Kingdom Hearts 3 really provides an absurd amount of variation, and that spreads to the basic gameplay and combat systems as well.

At its core, Kingdom Hearts 3’s combat system is the same as past games, giving you a mix of ground combos, aerial combos, magic, and summons to use. The big change this time, however, is Keyblade Formchanges, letting Sora transform his weapon into an entirely new one.

Each Keyblade has at least one, sometimes two, Formchanges and you can activate them by completing combos and attacks. These Formchanges are flashy and absurd, transforming the Toy Story Keyblade into a giant hammer, or the Monsters Inc. one into a pair of Yo-yos.

This does, however, add a lot of choice and variation. Keyblades are tuned more towards a specialization this time around, like the Ever After Keyblade boosting your magic and healing abilities. You can equip three different ones which gives players some strategic choices to make.

Having multiple weapons that can all transform honestly feels like a revelation for the series, and that’s not even talking about all the other options you have. By attacking enemies with a green circle around them you can unlock the chance to summon an Attraction Flow, letting the party hop on an iconic Disney theme park ride to cause massive damage.

This results in things like Sora jumping on the giant pirate ship and swinging around the battle, or all three members jumping into the Tea Cups and whizzing around the battlefield. These moves feel a little too powerful and easy to use than they should be, easily letting you wipe the field.

On top of this, there are various combination attacks Sora can do with Donald and Goofy, and the other guest party members.

Your party now also consists of five members, meaning you never ever have to choose party members, and you can simply bring everyone along for the ride. This isn’t a problem, though, as the game throws hordes of enemies at you at one time. Everything flows super smoothly, and the floatiness that many fans worried about before launch, just isn’t there in combat.

The game is constantly throwing option after option at you in combat, with almost every second having an Attraction Flow, Formchange, or souped-up magic spell to use.

>There’s a bit of a learning curve to combat, and it can be completely overwhelming for a while, trying to figure out what you should use at each opportunity. Once you settle into a groove, however, and figure out what works for you, combat can be a total blast.

One aspect that might disappoint people, however, is the difficulty. Longtime fans may be disappointed that the game lacks a Critical Mode, the longtime usual ultimate difficulty in Kingdom Hearts games.

Kingdom Hearts 3 isn’t necessarily easy, but it’s certainly not as difficult as past games, partly because of the sheer damage that special attacks and Attraction Flows cause. The goods news is that the game gives you multiple options to either make things easier or harder, clearly trying to appeal to both audiences.

A zero XP ability makes it so your party earns no XP from battle, while on the other side a Damage Reduction ability reduces the damage Sora takes when he’s under 25 percent HP. There are a few small options like this that let you fine-tune your difficulty, and choice really is what Kingdom Hearts 3’s combat is all about, simply because they give you so many.

The Gummiship also returns for the first time since Kingdom Hearts II, with a new lease on life. Developed by the team behind Einhander, the Gummiship sections feel much smoother than before. It’s basically split into two segments, totally open 3D exploration and rail-shooter style battles.

Think something like All-Range mode in a Star Fox game, as you’re able to fly the Gummiship around different galaxies, discovering planets, collecting treasure, finding secret constellations, and battling plenty of Heartless ships.

Wisely, the game doesn’t make you engage much with the Gummiship if you don’t want to, as it’s certainly not for everyone. You basically just have to fly from planet to planet and fight a couple boss battles, but there’s a much deeper gameplay experience there for those who do want to engage with it.

A Gummiphone adds some fun distractions letting Sora snap pictures and selfies, and take pictures of Lucky Emblems, hidden Mickey heads that serve as the game’s main collectible, with 90 to find scattered across all the worlds.

Of course, the main attraction of Kingdom Hearts 3 is probably story, and The Kingdom Hearts series, in general, is pretty renowned for having a dense narrative. This is easily where Kingdom Hearts 3 is most impressive. I don’t know if I’ve ever played a video game series that manages to wrap up so many disparate plotlines in one fell swoop.

Every spinoff, every loose narrative thread, is referenced in some way. Everyone gets their moment. It’s something that’s incredibly hard to judge as a boxed product, because for Kingdom Hearts fans, there’s so much emotion and connection tied up in these characters and their stories.

While this story does tie up many of the loose ends and questions, it also sets up a host of new ones. To be clear, Kingdom Hearts 3 feels like an ending to this saga, but there’s definitely much more happening in the future of the franchise.

I’ve been with this series since the very day the first Kingdom Hearts released on PS2, and as such, I can say Kingdom Hearts 3 was about as satisfying an ending as I could have imagined.

Of course, this fact is only applying to fans that are invested in the series, and you also have to factor in all the players that’ll be jumping onboard with Kingdom Hearts 3.

The story does take steps to make things clear and concise for new players, but part of what makes Kingdom Hearts 3 such an experience is the investment you have. Anyone that’s not attached to these characters can still enjoy the gorgeous imagining of classic Disney worlds, but it just won’t be the same.

If you’re willing to spend hours, time most people don’t have, watching videos or reading recaps to catch up on the story you can understand everything more. But, admittedly, these crazy plot twists and surprise moments won’t be as impactful if you’re not someone that’s been theorizing and looking for answers for years.

Presentation is another aspect of Kingdom Hearts 3 that deserves special mention, as this is easily one of the most graphically impressive games I’ve ever played.

Cutscenes are gorgeous, and all of the animations feel smooth and brisk. There are a lot of cutscenes, so it’s a good thing they’re so nice to look at.

Playing on PS4 Pro the game almost constantly ran at 60 FPS, with no hitches whatsoever. It’s impressive to say the least, especially with the mass of effects and special attacks happening on screen.

I can unequivocally say that Kingdom Hearts 3 has the best soundtrack of the entire series, which is really saying something.

Yoko Shimomura has done an incredible job updating tons of songs throughout the series, entirely new ones, and Disney-inspired ones. There’s a touch of Final Fantasy XV to the soundtrack, for sure, but in my book, it even goes above and beyond that soundtrack.

Kingdom Hearts 3 makes a strong case for being the best game in the series, and you can simply see quality behind the game’s development, whether or not you’re invested in the story.

For fans, it’s bound to be a harrowing, emotional journey, but it just doesn’t hold the same appeal to newcomers, although it’s not completely inaccessible.

An overwhelming amount of combat options and slightly disappointing difficulty can’t hold Kingdom Hearts 3 back from achieving the highs it does.

It’s an unerring tribute to everything Disney and what the Kingdom Hearts series has become, and despite its few flaws creates an interesting blueprint for where the series could go next with gameplay and story.