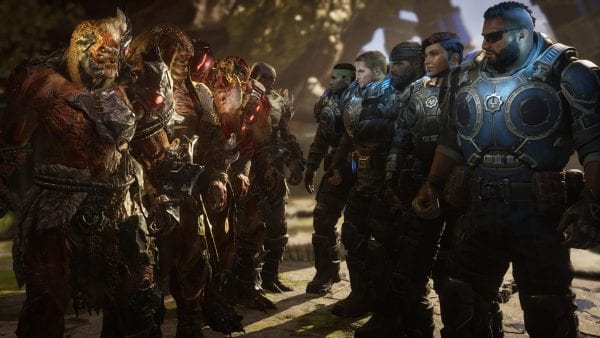 If you’re diving into the world of Gears 5‘s multiplayer, you’ll be aware that there’s a whole leveling system at the core of it all. Leveling up can allow you to re-up, earning you new cosmetics and some bragging rights among friends. Here are some tips and tricks on how to level up fast in Gears 5‘s multiplayer.

How to Level Up Fast in Gears 5 Multiplayer

Before we dive into how to level up in the multiplayer side of things, it’s actually worth breaking down the various systems that are at play here, as there are actually quite a few.

First, you have your core level in Multiplayer. This is the number just next to your name on leaderboards and in lobbies.

Next, you’ve got the Horde and Escape Mode character levels. These are unique to each character within each mode, and allow you to level them up to unlock new skills and cosmetics to make them even more powerful and suited to your style.

Finally, you’ve got the Tour of Duty, which essentially acts as Gears 5’s equivalent to various Battle Passes that we’ve seen before. Players complete challenges, rank up, and earn cosmetics along the way.

The level we’re talking about specifically here, is your general multiplayer level that we first talked about above. So, let’s dive into it.

While you might enjoy a little bit of Team Deathmatch, it’s one of the worst modes for earning ‘Score,’ which directly correlates to how quickly you’re going to climb the levels up to 100 in multiplayer.

Instead, focus on objective-based game modes like King of the Hill or Escalation. Not only do these tend to go on for longer, allowing you to rack up more kills and score in the process, but you’ll also earn a bunch of points for completing objective-related tasks. Which leads us onto our next point…

Don’t be one of those players who runs around revving the chainsaw bayonet behind people as they’re engaging in a skirmish around a contested ring in King of the Hill or Escalation etc. First, nobody really likes these people, and second, you’re letting a lot of potential points go to waste.

On average, an elimination (kill) will net you anywhere between 150 – 250 points from our experience (depending on whether you get the headshot, someone assists you with dealing damage etc.).

That’s all well and good, but if you focus on simply breaking enemy control over rings or claiming them for your team, that’s an easy 300 for just jumping into the ring and holding it down.

As such, if you play the objective, eliminate an opponent guarding a ring, and then claim it for yourself, you can get a sweet 750 – 850 points in the space of a minute or two.

XP Boost are the easiest way to capitalize on the ‘Score’ and XP you’re earning from every multiplayer game you play in Gears 5. Depending on which edition of the game you picked up, you might already have some, as the Ultimate Edition comes with a bunch of XP Boosts lined up.

If you picked up just the standard edition, you can still purchase these with Iron (the game’s microtransaction currency) from the store. They come in denominations of one day, seven day and 30 day boosts, priced at 250, 600, and 1200 Iron respectively.

Once you’ve purchased XP Boosts, they’ll immediately be active on your account, shown in the top-right corner of the screen, so get into games and start grinding out that XP.

That’s everything you need to know on how to level up fast in Gears 5’s multiplayer. For more tips, tricks, and guides, be sure to check out our ever-expanding guide wiki.