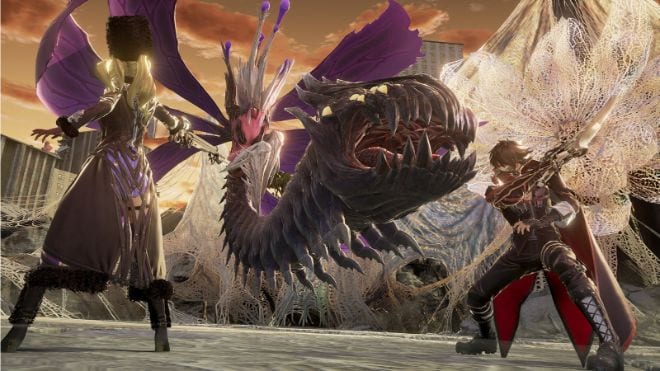 How to Beat Butterfly of Delerium in Code Vein

The absolute most important thing to be ready for with this battle is poison, as the Butterfly of Delerium liberally poisons you. At this point in the game your only option is to buy Venom-healing items from Coco at Home Base, so make sure to stock up as much as you can.

You’re gonna have a real hard time in this fight if you’re not prepared for poison. Other than that, you can use pretty much any Blood Code you want, although Louis’ Prometheus Code is a great option, if you have it.

Yakumo is the better option as a partner for this battle as he can tank the boss better, and with higher HP he won’t suffer as much from the effects of venom.

A faster build is generally a bit better for this battle, as the Butterfly of Delerium is pretty quick.

Make sure to equip one Gift that adds an effect to you and your partner’s weapon, either Flame or Lightning, as this can helps cause bonus damage to the boss.

There are a few noteworthy attacks you’ll want to watch out for when fighting this early boss in Code Vein, here they are.

Defeating the Butterfly of Delerium

Like we said before, poison is your biggest threat in this battle, as most of the boss’ attack will inflict the status on you. The Butterfly’s attack, in general, don’t cause a ton of damage, but that poison can constantly sap your health.

You’ll want to play things at medium range, closing into attack when you can, but backing far enough away that its melee strikes can’t hit you.

Your best chances to attack are right after the boss uses its charge attack. When it does, roll out of the way then run right at it while it’s settling back down. You’ll be able to get off a couple of combos before you need to back out again.

Keep an eye on your Focus gauge and the moment it fills up run straight up to the boss and try to get a launch attack off. The Butterfly of Delirium can easily be staggered with one or two launch attacks, opening up a huge opportunity for damage.

Ranged fire Gifts can also help supplement your melee damage. Finally, if you need to heal just be careful about when you do it, as if the boss uses that charging attack it’ll make your healing useless.

That’s everything you need to know about how to beat the Butterfly of Delerium in Code Vein.

For even more tips and walkthroughs make sure to check out our Code Vein guide wiki. Here are a few other guides you might want to check out in the meantime.