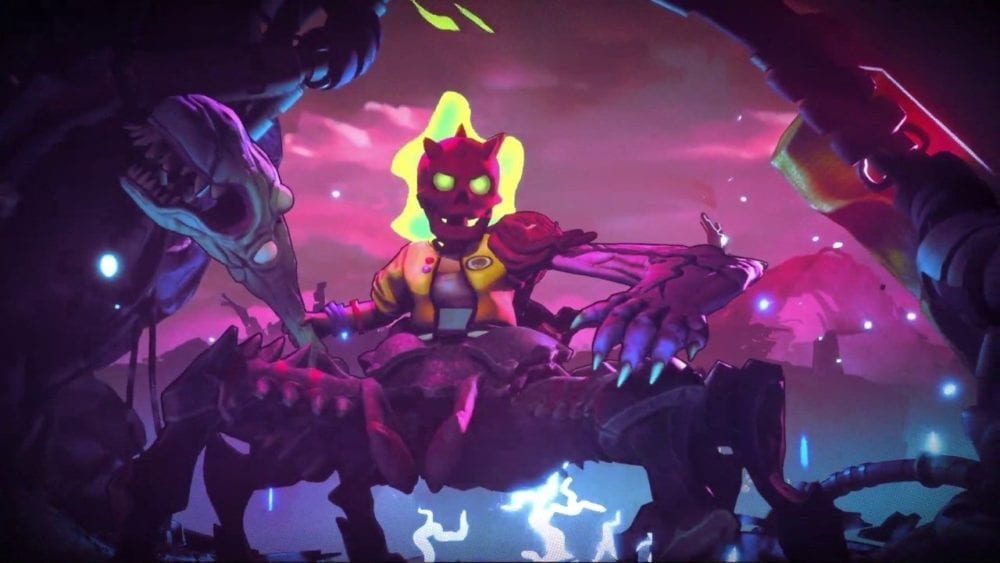 RAD is, for better or worse, like many of Double Fine’s other titles: A game with a great premise and aesthetic bogged down by technical issues and incongruent gameplay mechanics.

Set in a world stuck in the ’80s after two apocalyptic events, the game sees a small group of survivors on the brink of ruin. The technology they use to keep themselves alive is on its last leg, and the only way to repair it is to salvage supplies from the outside world.

This, however, is a near death sentence for whoever journeys out into the wastes, with horrible monsters out to kill them and a 100 percent chance of being mutated beyond recognition besides.

All the same, players take the role of one of several youths, journeying out into this wasteland however many times it takes to find what they’re looking for and save their fellow survivors; even if they may never return.

It’s a novel promise made all the better by the slow drip of lore the game provides. While the start is front-loaded with story, many smaller pieces regarding the how and why of the world’s circumstances are provided as players advance through each stage. The lore players receive is likewise randomized and filtered through the lens of the game’s characters, providing a sense of history that has been passed down and altered based on who has retold it.

Which, thanks to RAD’s ’80s aesthetic, is a treat most of the time. Characters sprinkle long-outdated lingo and attitude into even the most mundane bit of information. “Cultural artifacts” like cassette tapes and RCA have shaped entire communities, acting as currency and the driver for how characters dress or talk.

It’s right in line with the quirky, unexpected approach Double Fine is known for as a developer, and though it can feel forced on occasion, it almost always serves to keep players engaged and enthralled in the experience they’ve provided.

The same could be said of its sound and art design. Awash in blaring colors and a constant stream of electronic beats, RAD bleeds with a life and energy that fans of the decade will want to immerse themselves in for as long as possible.

Little touches, like the announcer shouting out old phrases and terms or loading screens flickering with screen static from tape damage, only enhance this feeling, and show the extra mile Double Fine went in committing to this aesthetic.

Unfortunately, the same high level of quality can’t be attributed to the gameplay. Or at least, not entirely.

RAD takes the formula of The Binding of Isaac and putting its own spin on several key elements. The map, while randomized, isn’t split up into rooms, and its powers are referred to as mutations.

While most of this works, and has been translated into a new gaming experience in a servicable way, other elements don’t mesh as well, sometimes even breaking the formula entirely; and not in a good way.

Case in point: RAD attempts to add melee attacks into the mix with selectable weapons players can bring with them on runs. These can range from the baseball bat provided at the start of the game to odd, mutated appendages that deal heavy damage.

Unfortunately, they end up being next to useless in comparison to ranged attacks later on. Several enemy types punish players who try to attack them in close proximity from any direction, sapping their health in no time and ending a run before players know what hit them.

This would be all well and good if players still had ranged attacks to fall back on, but depending on the mutations they acquired, they might not have any to speak of.

It’s a balancing issue that’s hard to ignore, and makes runs without a ranged ability next to impossible and a grind to get through alive besides.

Likewise, the mutations don’t synergize or play off of each other as much as players would expect, or as much as the game itself would lead them to believe.

While some abilities might mix well enough to allow for new strategies – such as allowing players to coral enemies into certain areas with corrosive acid pools so that their in range of a projectile attack – others do little more than offer a fail-safe in case one’s go-to ability whiffs.

It’s disappointing to say the least, and these elements can drag down the otherwise great experience the rest of RAD tries to provide.

And yet, RAD still shines as something special, or at the very least something unique. Even when the flawed gameplay design brings down the experience, the visuals and sound design and pull players back into the fray for one more run, another peak into the lore and another chance to lose oneself in the strange absurdity of the world.

It’s the kind of game that, if players are willing to look past its rougher edges, can provide hours of entertainment, and give them an experience both familiar and entirely off the beaten path.