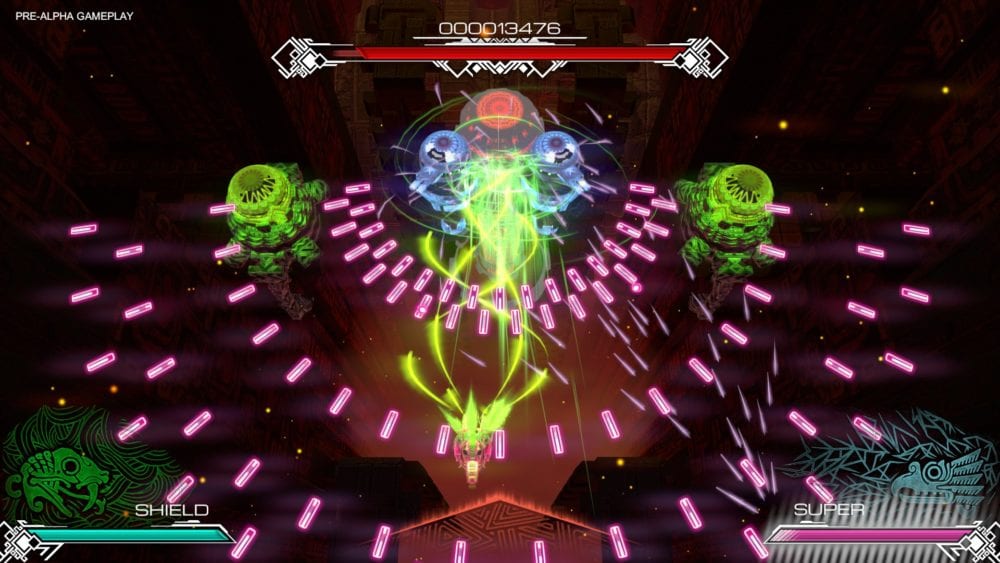 Pawarumi is a testament to how far the shmup genre has come since 1962’s Spacewar! despite the premise for the gameplay remaining basically the same.

Sure, you still just aim in the general direction of enemies and dodge whatever comes your way, but Pawarumi’s visuals and gameplay tweaks shake up the genre enough so it feels fresh and new.

Developer Manufacture 43 describes Pawarumi as rock, paper, scissors with lasers, which pretty much hits the nail on the head.

You choose between three kinds of attacks that are all categorized to a color being Jaguar red, Condor blue, and Serpent green. Enemies are always one of these three colors, and shooting them with any one of your options can have different effects.

For example if you are using your red Jaguar attack, hitting other red enemies will Boost your shield (i.e. health) but also makes the enemy stronger, hitting green enemies will use Drain and fill up your super attack, and hitting blue enemies with Crush does double the damage compared to the other two colors.

Depending on what color attack you are using, these effects will swap much like the attacks do in a game of rock, paper, scissors.

The first few times you try out a run, it’s all going to seem like a lot. It can be hard to remember what color coordinates with what enemy to do which specific task.

However, the beauty of Pawarumi is that it’s a game that is meant to be replayed over and over. The more you retry, the more your instincts slowly begin to retain the memory of what color is best at any given time based on past successes.

This makes for new depth in gameplay that the shoot ’em up genre isn’t always used to. Instead of just aiming and dodging, you now have to weigh whether it’s best to heal when your health bar is looking low, crush some low level enemies to get them out of the way quickly, or charge up your super attack for the boss battle that’s right around the corner.

What’s best about this design is that more often than not when you fail, it feels more like it’s your fault rather than a result of the game just being too hard. You think “whoops I should have healed there instead of charging my attack,” instead of “well that was impossible to maneuver out of.”

Every time you die you have to start from the very beginning, but you’ll be more welcome to the thought of having another go at it with Pawarumi. Trying out new strategies with color swapping is a lot less daunting then just getting better reflexes in general (although that is part of it too of course).

Another aspect of Pawarumi that makes it a more memorable shmup is the ways it can approach its boss battles by integrating clever mechanics to work with its Crush/Boost/Drain attacks.

Bosses won’t just be a bigger enemy with a bigger health bar, they each have a twist that will encourage you try to weigh your options on whether its best to Crush, Drain, or Boost at any given moment.

Some bosses even take it a step further by implementing creative ways to force the player to think on their feet with their choice of attack.

For example, one boss shuffled the three colors under rocks like in a ‘shell game’ and asks you to pick the right one it the right ammo color. While another will be wearing pieces of armor in various different colors and you have to decide which part of his body to attack first based on the types of attacks he is using.

Using the three different colors can also change how your rack up points. So if the ultimate high score is your game, mixing techniques will allow you to shatter your past records.

By tweaking how the points are awarded with a scoring guides that rewards variability, even veteran players have more reasons to replay to find new ways to string together combos for maximum rewards.

Alongside its gameplay, Pawarumi also has fantastic visuals that pull off being extremly detailed but not at all distracting to the player while focusing on enemies.

Every level takes place in a unique area, with a color palette that mixes between dark blacks and vivid neons.

This is all tied together by the memorable soundtrack, which combines traditional arcade-styled beats, rock riffs, EDM beats, and thematic sounds based on the level’s location.

While the gameplay itself stands strong, the story stringing it together is likely the worst aspect of the game. Short text sequences seek to add some sort to purpose to all the frantic shooting, but it feels more like second thought that should have either been improved upon or removed from the game altogether.

While the different difficulty settings have alternate stories, they all remain subpar in execution.

Luckily though the gameplay picks up the slack, and it’s fun enough to just shoot wildly without necessarily caring about the plight of protagonist Axo and the various enemy bosses you encounter.

You’ll want to progress for the sake of the satisfaction of making it further based on the merit on your skill, which makes up for the lack of a compelling story propelling the game forward.

Another minor issue on the Nintendo Switch version is an error that sometimes caused final scores to not be included on the Leaderboard at the end of the game.

When a game focuses so heavily on encouraging you to get a top score, it’s pretty disheartening to break your record and then have it be deleted without recognition. Luckily though, this only happened once or twice across numerous playthroughs.

Pawarumi could easily be one the best new shoot ’em ups the genre has to offer.

While the story is lacking, its modern visuals are detailed but not too messy and it’s all tied together with some fantastic music.

However, the most praiseworthy feature is clearly the Crush/Drain/Boost mechanic. Its inclusion is as simple as rock, paper, scissors in concept, but simultaneously make the game a much more in-depth experience when in action.

Pawarumi shows the shoot ’em up genre has new directions to go besides just improving the visuals with each passing decade.

If you are a fan of shoot em’ ups or have always wanted to try out the genre, absolutely.

Pawarumi released for PC on Jan. 30, and for Xbox One and Nintendo Switch on July 24.

Pawarumi is developed by Manufacture 43, an independent game studio from Bordeaux, France.