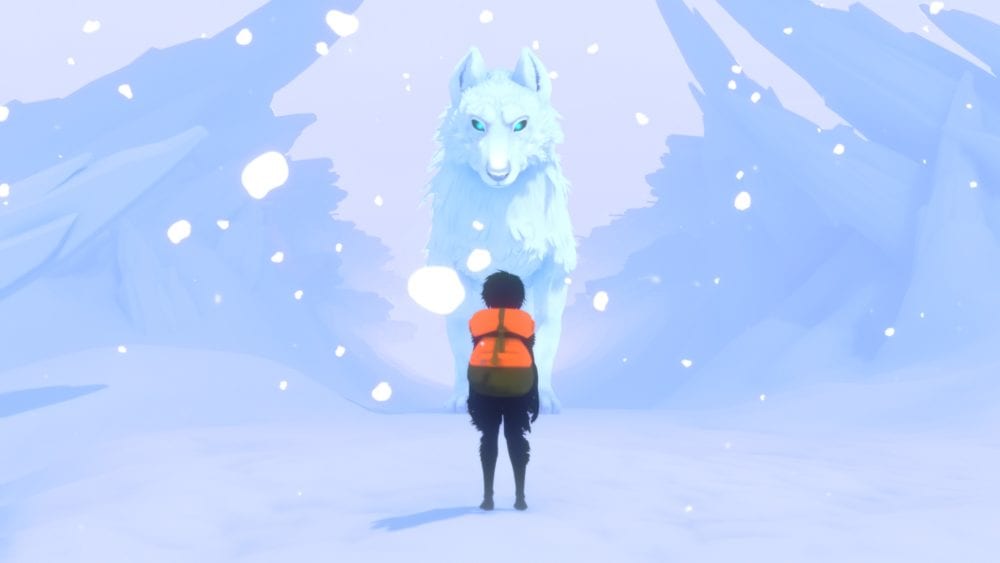 Sea of Solitude on PlayStation 4

EA’s Originals program has seen the release of a few great and unique games that couldn’t be more of a departure from the Battlefronts and Battlefields that we usually see from them. The most recent release under the banner is Sea of Solitude, which is a puzzle-based adventure game that puts personal stories of loneliness and struggles with mental health right at the forefront.

You play as Kay, a young woman who wakes up as a monster in a mysterious world. She’s not the only monster though, as she comes face to face with her demons that are closely linked to her family members and regrets she has from her life.

Emotional and compelling throughout, it’s the narrative that shines in Sea of Solitude. Seeing the world swing violently between dream like oasis to a nightmare fueled hell, it mirrors Kay’s troubled life.

She’s clearly a caring young woman, who wants nothing but the best for those around her, but she feels like she’s let everyone down, being too self-involved and driving them away. It feels like a very personal story. Intimately looking at Kay’s loneliness, you look below the surface, literally at times, to learn about the monsters that haunt her and see why she’s turned into a monster herself.

Using Kay’s story, it explores how and why someone suffers from loneliness. To all intents and purposes, she’s a normal young woman who feels anger and sadness. Early on, as you learn more about her, she even questions why someone with friends and a family would feel the way she does.

It’s this presentation of loneliness as something everyone can suffer from, and the way it looks at why, that makes it all the more powerful.

The aim is to avoid the darkness that’s trying to pull Kay back to rid her world of monsters and bring it back to the light. While it takes a little while to grab you and the beginning of part two drags, it’s a satisfying story by the end, where the messages truly come together, that could potentially connect emotionally to a lot of people. 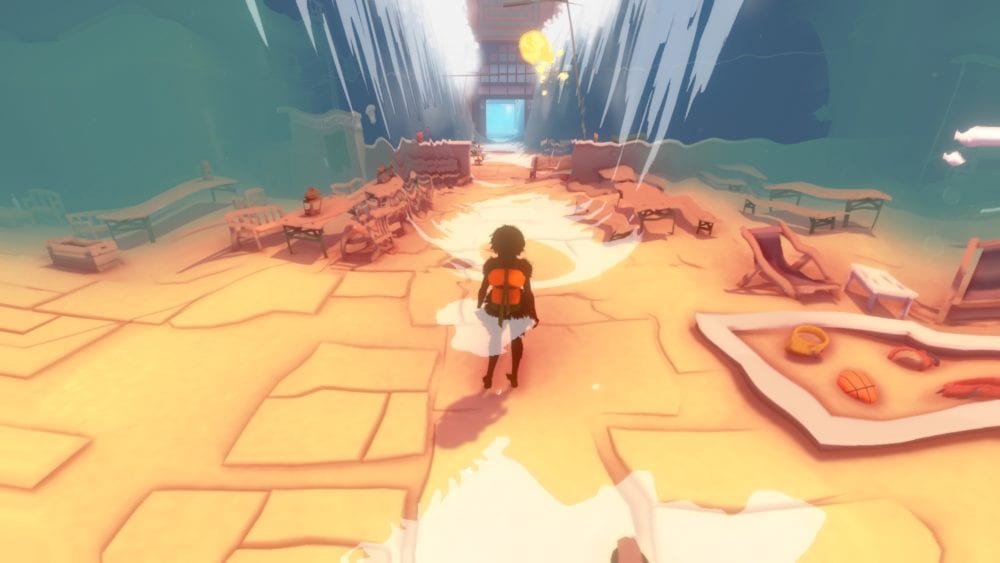 The beauty of the world helps too. It’s not a long or particularly globe-trotting journey, seeing Kay travel through what is just two distinct settings, but the way it uses darkness and the depth of the sea you’re exploring makes it feel more broad than it might otherwise be is impressive.

Just looking out to flooded streets the first time Kay sets sail in her little boat is a memorable moment. Everything has a paradise sheen, the dream like quality not only adding weight to the story but making the world a stunning place to just run or row around.

The vibrant blues and sandy yellows don’t always stay, though, with the darkness of Kay’s loneliness often manifesting itself in the world. The dark moments do make you miss the beauty that starts the story, but it’s vital for the way it’s told. It’s here that the positives end, however.

Sea of Solitude has a similarly intimate and emotional tone to what has made a lot of other indie titles a success, but its gameplay isn’t up to the same level. Throughout, it veers between serviceable and tedious, with no moments standing out as genuinely engaging. At times, it’s dull to a point that I can see it putting people off from sticking with the story.

It starts off as pretty standard 3D platformer stuff. In the flooded city, Kay has a little boat that she gets from place to place in and there’s a monster lurking just beneath the surface. By holding R2, she can send out an orb that leads you towards the next objective and you need to use the rooftops, ladders, and water ways to get there.

Kay is quite sprightly and has quite the leap on her, so the actual platforming is fun enough; the design just never really goes anywhere. The monster can only attack you when you jump in the water, so you need to keep track of its whereabouts and swim across as fast as you can at the right time. There’s nothing wrong with any of that, especially early on, it’s just not very inspired.

However, towards the end of the first tale the gameplay takes a turn for the worse when enemies and orb collection are introduced. You need to avoid little monsters that will see you die after a few touches, you need to run around and collect orbs to help your little orb mate that’s being attacked by corruption throughout, and there are lasers of sorts that you need to free and use to attack larger monsters. 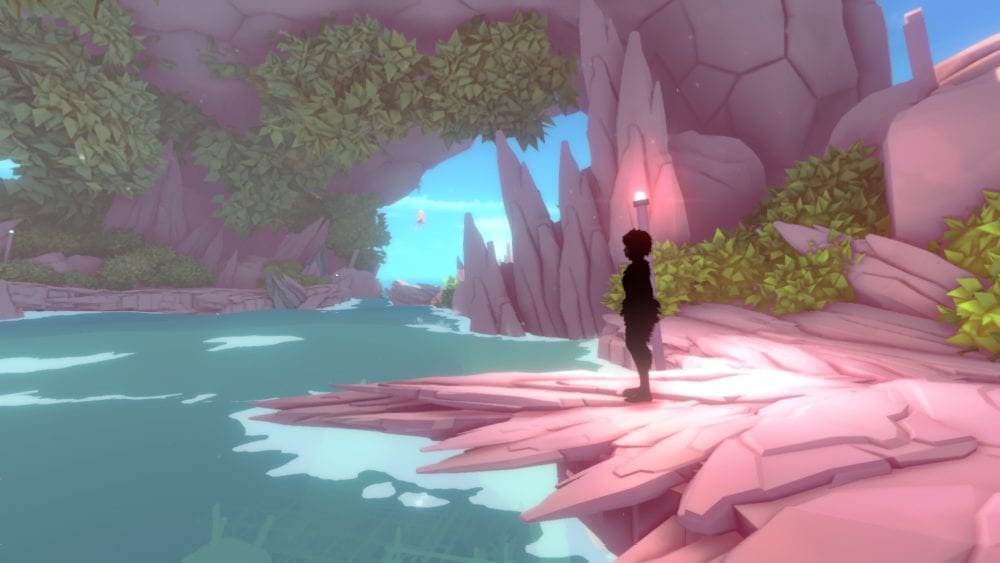 It’s not difficult, frustrating, or even particularly bad, it’s just boring and distracts from the emotional story and beauty of the world. I’d much rather have the freedom to explore and jump around without a care in the world than have to run back and forth in a courtyard, removing corruption from orbs.

Also, aside from one sequence later on that combines the chase, platforming, and very light puzzling, the gameplay doesn’t go anywhere interesting either. The removing of corruption you’re doing at the start, and the enemy avoidance you’re doing after 20 minutes is exactly what you’re doing three hours later just before Sea of Solitude ends.

There’s a particular moment that comes towards the end of your time in the game’s first area that almost signals the end of the your time enjoying Sea of Solitude’s gameplay. The darkness takes over the world and you need to traverse a skyscraper, being introduced to a few new mechanics on the way up. It removes much of what was great beforehand, and restrict it for much of what comes after.

The simple platforming and beautiful world that come before are much more fun than what comes later on, which is a shame, because the most powerful narrative moments come after the gameplay makes an unwanted turn.

Sea of Solitude has the story and visuals of a much better game. Kay’s story of loneliness is powerful, compelling, and clearly personal to the developers at Jo-Mei Games, and it’s enough to make whole game worth playing. Even if you’re fascinated by the story though, the tedium of actually playing Sea of Solitude will diminish its impact.