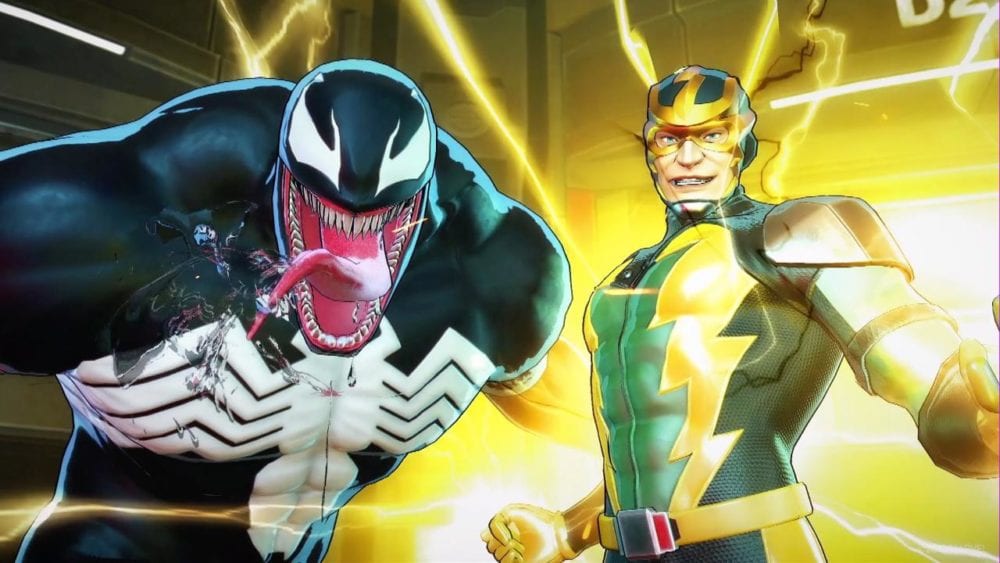 Considering this is one of the very first boss battles in the game, you can really go with any kind of team for this battle, especially since everyone will be near the same level. A couple of good choices, however, are Spider-Man and Captain America.

Obviously, these are Spider-Man’s villains so it just seems right, but his ranged web-shooters are super useful for damaging the bosses from a distance and his mobility is super helpful for dodging the smash attacks from both Electro and Venom.

Meanwhile, Captain America is always a good choice for boss battles due to the fact he does a lot of damage to stagger gauges, has a ranged attack on Y, and can straight up block attacks with his R+Y shield ability.

Electro is the easy part of this battle, and he’s a bit of a pushover. Do your best to avoid his attacks, and if he jumps into the air dodge out of the electric ring that appears on the ground, before he comes crashing down.

During this battle, Venom will shoot down sticky goop that hits the field, and it can really slow down your characters. If you end up stuck in it, immediately jump out before Electro can catch you.

Use Synergy Attacks as much as possible to really damage Electro, and bring his stagger bar down, then once he’s staggered just wail on him. If you build up an Extreme attack, just save it for Venom as it’ll be much more useful then.

Once you’ve beaten Electro, Venom will jump down and basically devour Electro, gaining electric powers…. yikes. Venom hits a lot harder than Electro and has a huge focus on melee attacks, so just do your best to dodge or block. If you have any ranged characters, like Star Lord, switch to them and pepper Venom with attacks to bring his stagger bar down.

Luckily there is a trick to this battle, and Nick Fury will even chime in and say you can use the sparking wires. To do that you need to wait until Venom jumps up onto the second level, and then a little attack circle appears around you before he jumps down. Run over to the sparking wire and make Venom crash down on it.

This will send a shock to the alarm and completely stun Venom, letting you wail on him for about 10-15 seconds. When you have an Extreme attack save it for this moment, and immediately when Venom is stunned use the Extreme to get maximum damage.

The final thing to watch out for is when Venom drops to all fours on the ground, as about five seconds later he’ll launch a giant spike attack that hits a huge radius around him. When he does this, very quickly try to dodge away and get out of his range.

Just keep repeating the alarm trick and attacking Venom, and eventually, you’ll bring him down. Good news too, just talk to Venom after the battle and you’ll have a shiny new character to play as.