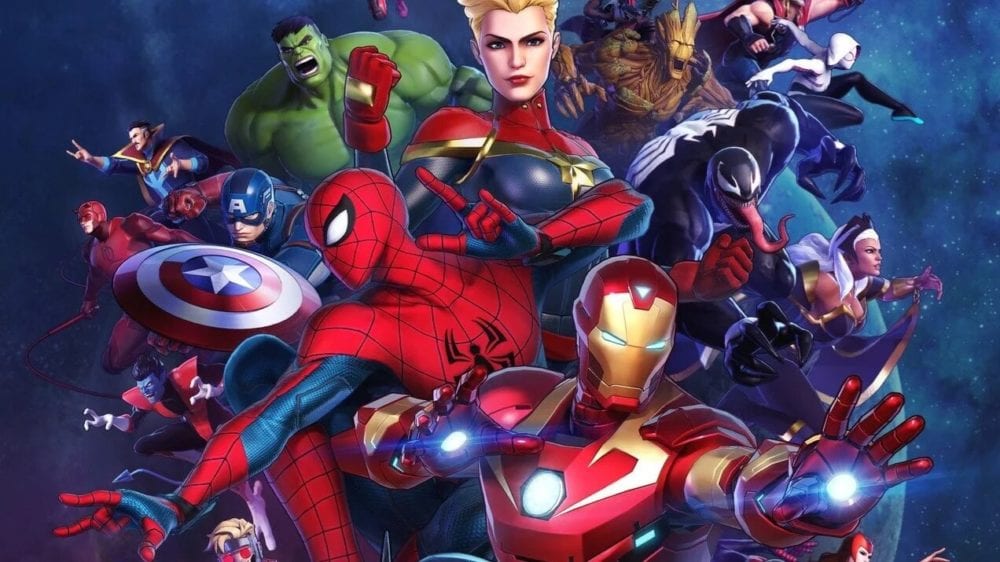 When Marvel Ultimate Alliance 2 released in 2009 we were just two movies into the Marvel Cinematic Universe, with only Iron Man and The Incredible Hulk. The status of the superhero genre has transformed radically since then with 21 more Marvel movies, over 10 Marvel TV shows, and an absolutely obscene amount of promotion and products.

After all that, does Marvel Ultimate Alliance 3: The Black Order still stick to its old-school roots? Well the answer is both yes and no, in different ways, but one thing’s for sure: Ultimate Alliance 3 is crazy, over-the-top superhero action at its finest.

Ultimate Alliance 3 splits off from the continuity of the past games, instead telling a new story that simply happens within the larger Marvel universe. The Guardians of the Galaxy discover Thanos and the Black Order’s plot to obtain the Infinity Stones, and so an Ultimate Alliance of heroes comes together to recover the stones which have been scattered, and keep them out of Thanos’ hands.

Now the Infinity Stones have gotten into the hands of iconic Marvel villains, which presents a wealth of different challenges for the heroes. Needless to say, much of the content in Ultimate Alliance 3 probably wouldn’t be there if it weren’t for the MCU and other recent successes.

However, past that it’s clear that Ultimate Alliance 3 is a comic book game through and through, as there are a ton of little treats and nods for those that really know their stuff. From the inclusion of characters like Elsa Bloodstone, to the classic comic-inspired designs of characters like Claw.

On the topic of the game’s story, it’s a pretty standard superhero fare. There’s no real weight or emotion behind characters and the events, but at the same time, those weren’t really there in the past games either. It’s all about seeing your favorite heroes team up in fun ways, and it’s at least fun to see some of the gorgeous cutscenes play out.

The real focus, of course, is on the action and gameplay, and boy do those deliver. Ultimate Alliance 3 stays true to the gameplay style of the last games, letting you build a team of four heroes to take into hack-and-slash style combat.

The game’s combat seems simple on its face, with each character having a light combo mapped to X and a heavy attack mapped to Y, as well as four abilities mapped to R and the face buttons. As you progress through the game, however, there are layers of complexity added on.

There’s a big emphasis on learning enemy’s attack patterns, and dodging or blocking said attacks while knowing when to execute your own.

Synergy attacks take the place of what used to be Fusion attacks, letting two heroes combine their abilities to perform a massive attack that causes extra damage, has a wider area-of-effect, etc. It’s super easy to use Synergy attacks too, whether you’re in single or multiplayer.

In multiplayer, two players simply need to use compatible attacks at the same time and they’ll interact, in single player you can press down ZR and the game will dynamically adapt to whichever hero you’re next to, highlighting one of your ability buttons if there’s a compatible Synergy attack, and there usually is.

On top of all that you have Extreme attacks, represented by an orange gauge that builds up around your character portrait while you give and take damage. Once full you can launch a devastating super attack, and if all four heroes have an Extreme ready you can launch an Ultimate Alliance Extreme, which has all four attacks launching at once for a blinding cacophony of particle effects and sound.

There’s a big focus on progression in Ultimate Alliance 3, and that comes in multiple different ways. Primary among those is leveling up your heroes, and each and every character in the game levels up independently.

As heroes level up they’ll learn all four of their abilities, opening up new options, and earn AP to boost and enhance those abilities. Of course, they’ll also just boost their stats. The character roster is where the game’s diversity really starts to shine.

Because each hero feels so varied, there are countless team compositions to make and it’s a blast to try out different parties and see which ones might work best.

There a lot more to progression, however, coming in the form of ISO-8 crystals and Alliance Enhancement. ISO-8s are equippable crystals that boost characters stats or provide special effects, like increasing light attack damage or increasing the likelihood that character is targeted.

As characters level up you’ll unlock more slots for ISOs, and the crystals themselves can also be leveled up to enhance their effect. Alliance Enhancement, on the other hand, is a massive grid of nodes, each of which give you a stat boost or beneficial effect. Think of it like a giant Sphere Grid from Final Fantasy X, and all of the enhancement you get will take effect on your entire party.

You need enhancement points, earned whenever a character levels up, and credits, which the game liberally showers you with.

Through all of these aspects, Ultimate Alliance 3 has a satisfying progression loop, and one that you can use to specifically strengthen the heroes you use most.

Of course, with so many heroes, if you really want to level up everyone, you’re going to be sinking a lot of time into grinding. Luckily, you can get XP cubes as collectible items to instantly grant experience to a character, and a second aspect of the game, called Infinity Trials, provides even more opportunities.

Apart from playing the story, this is where you’ll spend the rest of your time, as there are four “Infinity Rifts” to play through, each of which are basically a map with a bunch of nodes on it. Each node is a battle that applies specific effects or restrictions, like making it so only your Extreme attacks do damage, or so that your health constantly drops and you can only restore it by attacking.

These provide some fun little twists on gameplay, and needless to say, there’s a truckload of content to play through. This is also where you’ll unlock new costumes, collect a ton of XP cubes and other consumables, and even unlock some secret extra characters.

I’ve talked a lot about how fast and frenetic combat is the game, but with that, we need to touch on how the game performs. At almost all times Ultimate Alliance 3 runs at a crisp framerate with no drops whatsoever in my experience, at least while playing locally and not online. The only exception to this is when you have four Extreme attacks launching at once, there’s a tiny bit of slowdown.

Whether in handheld or TV mode the game keeps up this brisk pace, although the resolution clearly takes a bit of a hit in handheld. Team Ninja has also included two different camera modes, one that matches the style of the old Ultimate Alliance games, and one that more closely resembles your typical action game.

Classic Camera gives you that top-down view with a zoomed out camera, while Action view puts the camera right behind your character for a “closer to the action feel.” Despite being a fan of the older games, I chose to go with Action view most of the time as I just found it more conducive to the experience, especially when really wanting to see character and attack animations up close. Still, it’s nice for the options to be there.

Ultimate Alliance 3 isn’t the most graphically impressive game by any standard, but the highly stylized graphics really help give the game a comic book-y feel, and the cutscenes, in particular, are oftentimes spectacular.

The other aspect I found myself surprisingly enjoying are the voice performances, which are cheesy and campy in a fun way. Voice actors do a great job of adding personality to their characters, and there are some recognizable voices that are fun to see in these roles.

For example, Yuri Lowenthal from Spider-Man PS4 returns to voice Spidey, and Johnny Yong Bosch (Nero in DMC 5) voices Iron Fist. Music also does a good job at reinforcing that comic book feel, as each chapter has a distinct style, like the X-Men chapter being heavy on those guitars from the 90s show.

One thing I think at least deserves mention is the load times. While they aren’t unbearable, there’s a lot of loading you have to sit through, especially considering playing Inifinity Trials takes you entirely out of the story mode, forcing you to load into each mode separately whenever you want to switch things up.

At first, I found myself surprised at how much Ultimate Alliance 3 felt like the past two games, but as I spent more and more time with it things became more involved and I found myself hooked in even more. It’s clear that Team Ninja really wanted to capture the spirit of Ultimate Alliance, and for what it’s worth I think they succeeded.

The relentlessly fast combat continues to be a blast even after tens of hours, and the sheer variety in the roster helps keep things interesting. There are a few niggling issues that crop up, like the sheer amount of grinding you might need to do, and the story fails to go anywhere truly interesting, especially after standout experiences like last year’s Spider-Man.

Still, Marvel Ultimate Alliance 3 is a treat for any fans of the old games, or even just Marvel fans in general. The game manages to be welcoming to those with only knowledge of the MCU, or those that have a deep well of comic knowledge. Team Ninja and Nintendo have done a bang-up job, and I sure hope it paves the path to even more Marvel games.