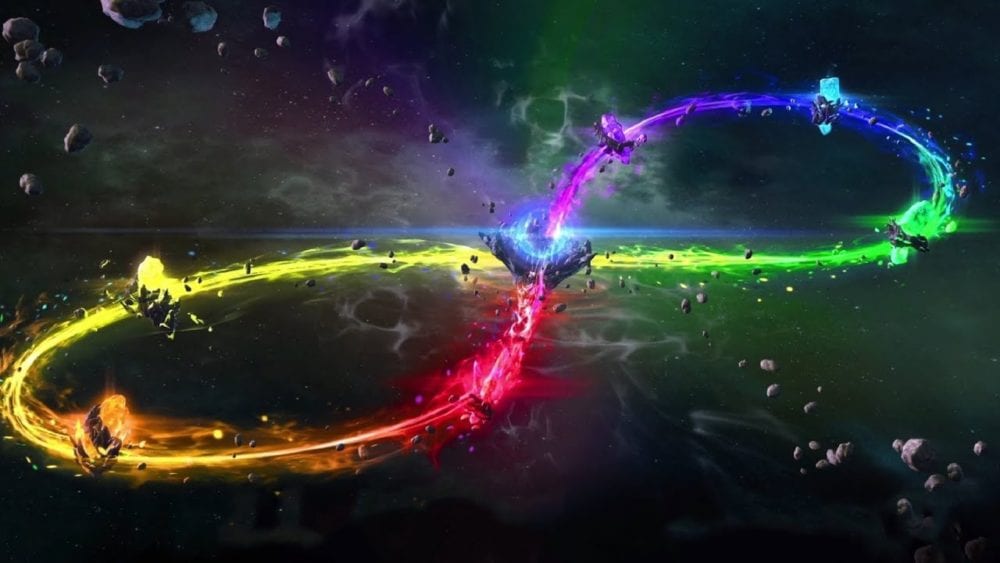 If you’re looking for an explanation of the after-credits scene, just scroll down a bit.

At the end of the game, the Alliance travels to Knowhere in order to finally take down the Black Order and ends Thanos’ reign of terror.

Right in the middle of the battle Thane appears and steals the Infinity Gauntlet from Thanos, and then summons the incredibly powerful Infinity Armor, making the heroes team up with Thanos himself to take down the Mad Titan’s son.

After the climactic final battle Thanos uses his power to put an end to Thane, basically killing both of them in the process. However, Gamora is quick to point out that Thanos has always found a way to return, even from death.

At this point, the Alliance has won but the Infinity Stones are still there, and still just as dangerous. The heroes split up and decide to house the stones in different areas across the universe; Dr. Strange, of course, takes the Time Stone possibly transporting it to another dimension, Thor takes the Power Stone to house in Asgard, Black Panther stores the Mind Stone in the tomb beneath Wakanda, Captain Marvel transports the Soul Stone to a faraway planet, Iron Man takes the Reality Stone to Avenger’s Tower, and the Guardians of the Galaxy keep the Time Stone on their ship.

All is well in the universe again, except for after the credits are over. In traditional Marvel-style there’s a stinger at the end, and although it’s a short scene it provides a hint as to what could come next.

In the scene two giant eyes appear in space above the Heart of Infinity, and as the camera zooms out it’s shown that these eyes are galaxies. While it’s hard to say exactly what this means, there are a few theories we have. No matter how you look at it, however, this hints at diving even deeper into cosmic entities, which is becoming an even larger part of the overall Marvel universe and MCU.

There are few beings large and powerful enough to have eyes that size, but one of them is Galactus, fittingly given the nickname Destroyer of Worlds. Galactus is one of the most powerful characters in the entire Marvel universe, and he’s usually depicted as a god-like character who feeds off of the energy of planets.

With the huge influx of power from Than using the Infinity Stones and armor, it’s likely that a being like Galactus would take notice, and seek that power for himself. Galactus is the first and oldest being in the entire universe, and with heavy cosmic themes in Ultimate Alliance 3, it only makes sense that the ultimate cosmic enemy might be what’s next.

While the eyes being galaxies don’t necessarily make sense with Galactus, it could just indicate his massive size in this version of the universe, and how he’s feeding off of worlds.

Yet another ultimately dangerous villain the ending could hint toward is The Beyonder, a cosmic entity that threatened to destroy the entire Marvel Multiverse at one point.

When he was first introduced, The Beyonder was seen as a godlike entity that was the sum total of an entire multiverse. Over time his origins changed to make him a Mutant that was affected by the Terrigen mist that turns people into Inhumans. This resulted in an explosion of power that made him an ultimate being.

The Beyonder has immense reality-warping powers, and he’s often regarded as one of the most powerful beings in the entire universe. The ending of Ultimate Alliance 3 could represent the immense power and control the villain has, with his focus now turned toward the Heart of Infinity.

Obviously, if this is the case, the heroes are sure in trouble for whatever comes next.

A third option for who those eyes belong to could be Eternity, a massively powerful cosmic entity who’s the de facto leader of the entities known as the Cosmic Powers of the Marvel Universe. Although Eternity definitely isn’t a villain, the ending scene could indicate his involvement in watching over everything, and realizing there’s a greater threat the heroes will still have to face.

Eternity possesses cosmic awareness, giving him knowledge of almost everything that happens across the universe. The character doesn’t possess a physical body, as he’s more of an abstract entity, which would absolutely fall in line with the two eyes resembling galaxies.

Eternity can manipulate the multiverse to achieve nearly any effect he wishes, and that might just be the next step for the Ultimate Alliance series.

Instead of hinting at a character’s involvement, the end credits scene could just be indicating a larger multiverse will now be at work within Ultimate Alliance. With Thane using the power of all six Infinity Stones and summoning the Infinity Armor there’s, obviously, a huge influx of cosmic power.

Knowing how the Marvel universe works, it’s unlikely that this event would have no effect on the universe at large. The battle could have ripped a hole in reality, opening up a portal to an alternate world or the multiverse at large.

It’d be an interesting take if the next Ultimate Alliance game takes us to alternate realities, possibly introducing more unique heroes like Spider-Man Noir or Old Man Logan.