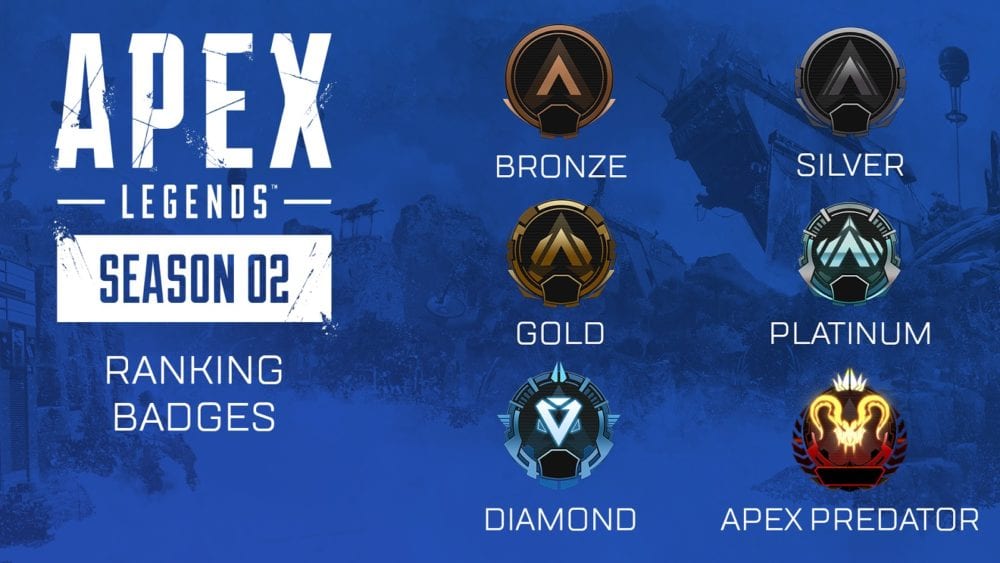 Called Ranked Leagues, the mode will run in competitive periods or “Series” for a limited amount of time. The first Series will run during Season 2, from July to September, though the studio noted future Series may run out of sync with upcoming seasons.

Each Series will include six tiers: Bronze, Silver, Gold, Platinum, Diamond, and Apex Predator. Each will have four divisions: IV, III, II, and I being the top.

All Apex Legends players will begin at Bronze IV, but may be placed higher in future Series due to previous placement. Ranking up through the tiers require Ranked Points (RP) earned by doing well in matches.

“Kills are worth 1RP up to a maximum of 5RP per match” Respawn wrote. “Placing Top 10 is worth 2RP, Top 5 is 4RP, Top 3 earns 7RP, and a win will bank 12RP. Each placement score is exclusive, so if you finish in the Top 5, you won’t earn 6RP for a Top 10 and Top 5 finish combined. That means the maximum score you can earn per match is 17RP, before the match entry fee.”

Every match will require an entry fee to play, except for the Bronze tier, starting at 1RP at Silver up to 5RP for Apex Predator. Losing RP can demote players from divisions, such as Diamond II to Diamond III, but not from one of the six tiers, like Platinum IV to Gold I.

While players cannot be demoted between tiers, each tier requires a certain number of RP to join. Players may also receive penalties for leaving matches early, and loss forgiveness for players affected by early leavers or crashes from the game or servers.

Respawn mentioned earning rewards for reaching certain ranks, but did not reveal specific rewards for Season 2. The image above shows that potential rewards include badges, weapon cosmetics, and dive trails.

Ranked Leagues will begin alongside the start of Season 2 for Apex Legends beginning on July 2. The new season will also bring a new character, new gun, a redesigned Battle Pass, and more.