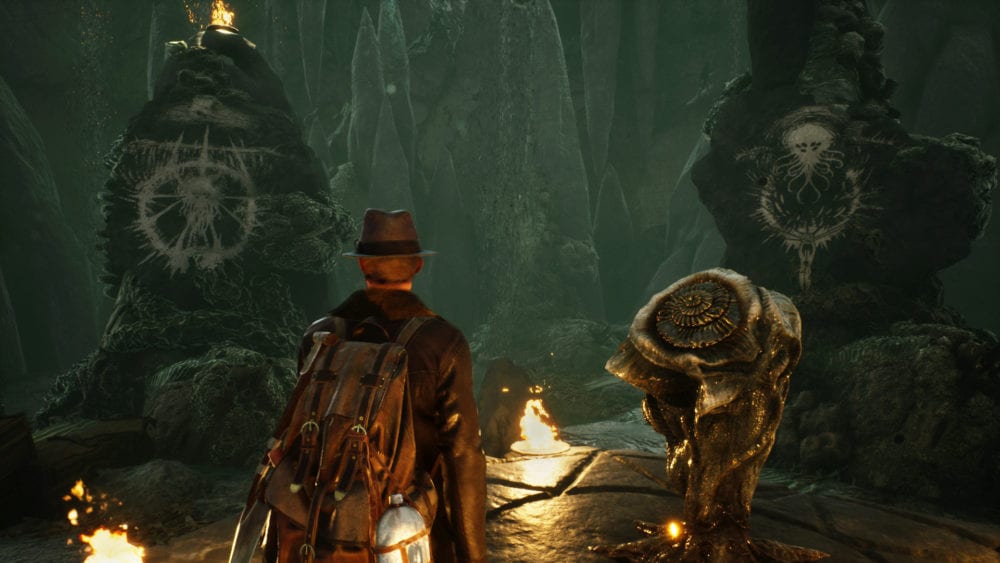 The Sinking City on PC

There have been many attempts at Lovecraft-inspired games over the years, but few have managed to accurately nail the author’s unique brand of cosmic horror. It’s not an easy genre to pull off by any stretch, but Frogwares’ The Sinking City might just be the best Lovecraftian game on the market.

We’ve seen similar themes crop up in games from bigger studios, but while they might have a bit more polish, none have managed to hold the same level of accuracy to the texts. The Sinking City perfectly captures the novels’ sense of dread, mystery, and above all, fear of the unknown.

The Sinking City is set in the fictional 1920s coastal city of Oakmont, a perfect realization of the North-Eastern Massachusetts setting for most of Lovecraft’s novels and what’s become known as Lovecraft Country. The story centers on ex-navy private investigator Charles W. Reed as he arrives at Oakmont to investigate the supernatural flood that grips the city and warps the minds of its inhabitants.

At the same time, he also conducts a much more personal investigation into the bizarre dreams and visions he experiences –the exact same visions that have been reported by several citizens of Oakmont. It’s precisely Reed’s unnatural ability to see what others can’t that make him such a great detective, but using these powers comes at the cost of his mental stability.

The mystery he unravels is a winding story of intrigue, slow revelations, and disturbing truths. The game delivers a classically Lovecraftian story with a scope that keeps getting bigger, and (though we’ll make no mention of spoilers) there are some some fantastic twists along the way. 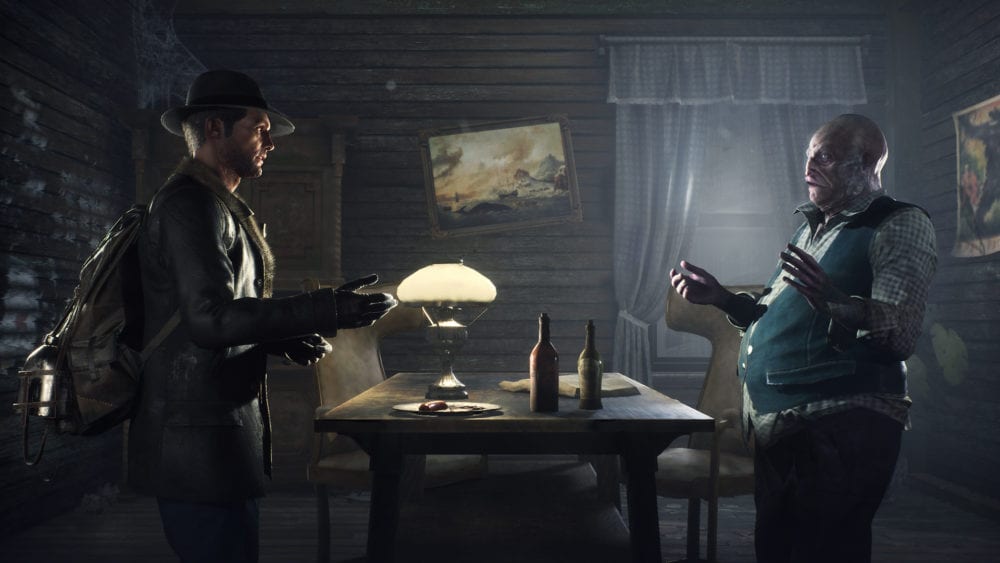 Gameplay in The Sinking City chiefly revolves around detective work and solving mysteries. Much like Frogwares’ Sherlock Holmes series, you investigate a variety of crime scenes and suspicious locations. As you inspect clues you’ll slowly fill up your casebook.

Once you have enough of them they’ll be added to your Mind Palace, where you can tie clues together to make deductions. The more deductions you make, you closer you draw to solving a case. An important thing to note is that the difficulty settings are split between combat and investigation, allowing you to tailor your gameplay experience to your strengths and preferences.

If, for example, you’re not the best at problem solving and more invested in monster hunting, you can make clues more visible and get prompts to visit your Mind Palace, while keeping enemies hard-hitting and harder to take down.

The game has a leveling system with RPG elements and deducing, interviewing a suspect, and killing enemies all reward you with experience. Accruing enough experience awards you a Knowledge point that you can choose to funnel into different skill trees, some of which are more valuable than others. For instance, being able to carry more than six rounds of ammo is infinitely more valuable than gaining a 15% health boost when health packs are so easy to craft.

While combat doesn’t take center stage in this game, there are a host of bizarre, Silent Hill-esque creatures you’ll cross paths with in the course of the game. All creatures are known as Wylebeasts and range from small, fast, many-legged wisps to huge monsters whose thundering footsteps (or should that be clawsteps?) make the camera shake.

Ammo is very limited and it’s less likely you’ll find bullets in the world than the gunpowder and shells needed to craft your own. With even the smallest monsters needing several shots to go down, it’s often a better idea to run or hide.

Encounters with Wylebeasts aren’t very dynamic in the main story, but if you relish a good shootout with horrific monsters you’ll enjoy Oakmont’s many Infested Areas. These parts of the city are walled off and crawling with Wylebeasts. Finding your way into these restricted areas means every monster inside coming after you. When taking them out, be sure to run around and have a good explore to pick up the health packs and ammo needed to ensure you get out alive. 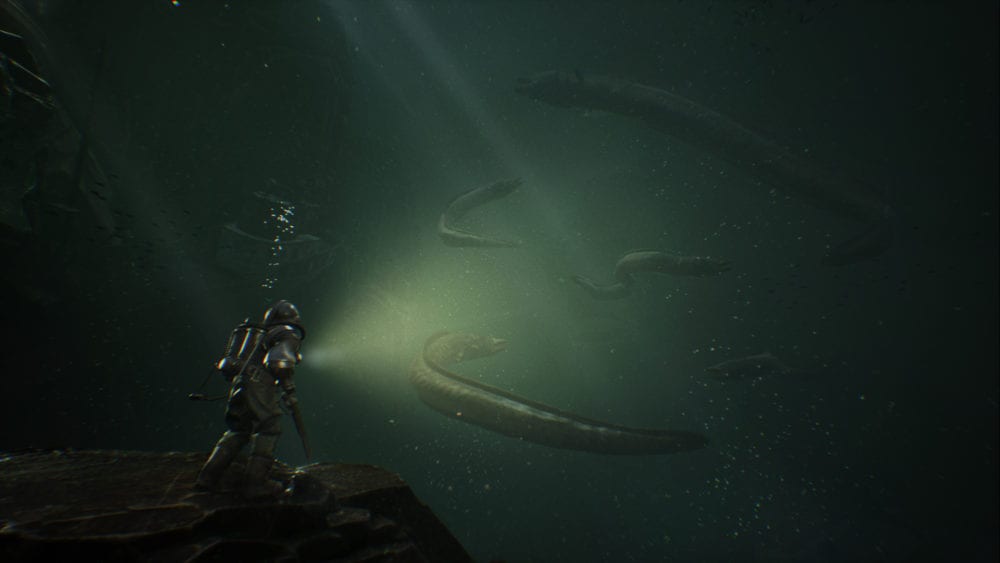 The game is open world, with the entirety of Oakmont being free to explore. The city is divided up into seven distinct districts that each have their own personality, as the architecture and inhabitants change to reflect the class status of these areas.

While the affluent areas remain largely unscathed, poorer districts have been heavily affected by the flood. Most streets connecting districts are submerged and infested with carnivorous eels, so you need to rely on a tiny motorized boat to get around. The boat handles surprisingly well. Steering is nowhere near as cumbersome as you’d think and having to use it so often really adds to the sense that normal city life has been debilitated.

The developers clearly put a ton of research and time into making Oakmont a fully realized 1920s East Coast city, but The Sinking City falls into the same trap a lot of open world games do in that it doesn’t utilize being open world. You’re left with a wide open space and little to fill it.

There are side quests of course, as well as Infested Areas and the odd lootable house, but they don’t do much to pad out the vast emptiness of the world. Conversely, one of the game’s more linear areas, where you enjoy some claustrophobic deep sea diving, have some of the most terrifying experiences in the game.

As basic white guy protagonists go, Reed is less generic than you’d think, though it’s true that his dialogue tends towards gruff platitudes and he’s given the same military hero background most fictional detectives get. But right from the start, the game tells us Reed is actually fairly fragile.

The sanity meter he’s equipped with is depleted simply by seeing unnatural creatures or a particularly disturbing dismemberment, to the point that it can affect his behavior. It’s hard not to feel somewhat protective of Reed as he bats at the air and struggles to not hold a gun to his temple.

His Mind’s Eye and Retrocognition abilities are invaluable to a case, letting him see past events with no evidence to go on, but they also take a chunk out of his sanity for as long they’re active, so use them sparingly. 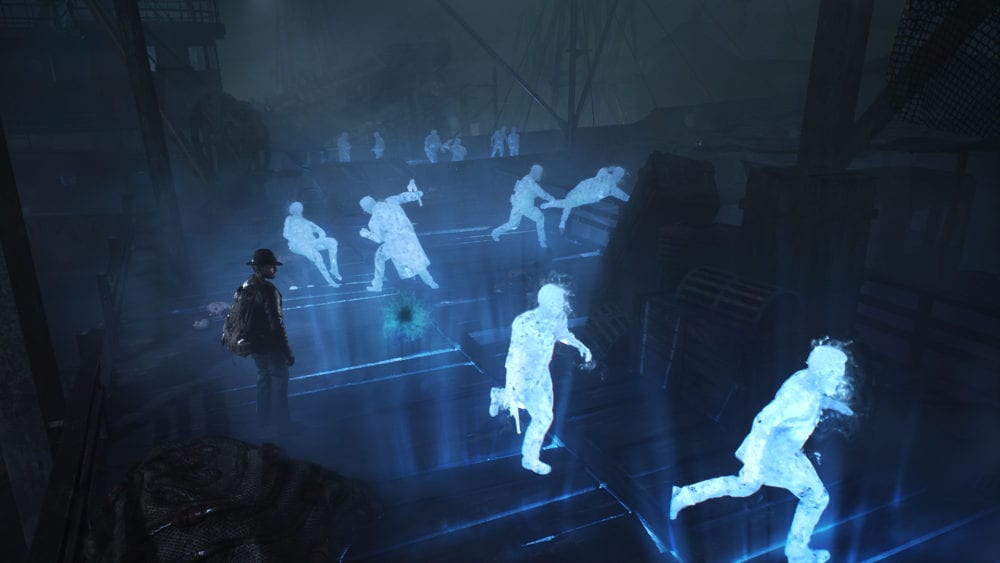 One of The Sinking City’s key strengths is its visuals. While it may not be the most graphically spectacular, the graphics hold up amazingly well for an indie. The game has atmosphere in spades and remains unrepentantly oppressive and grim throughout.

On a technical level, the game runs smoother than some were predicting it would, despite the lack of polish when it comes to interacting with NPCs. There are a few instances where dialogue will refer to something you haven’t done yet, and it can be easy to miss out on some dialogue options.

The game’s not a direct adaptation of any of Lovecraft’s works, unlike 2018’s Call of Cthulhu, but is instead inspired by the general Lovecraft universe and Cthulhu mythos. There are references to his various stories everywhere in the game. It’s something you can clearly see in character designs, like your simian quest-giver Mr. Throgmorton and the fish-like Innsmouthers. You’ll find artifacts that obviously evoke Cthulhu and walk down the same mildewy shores you could find in any Lovecraftian story.

Aside from some indie crunch, The Sinking City is a moody yet faithful dive into the world of Lovecraft that would make a great starting ground for anyone new to the genre. It would be nice to see the world and combat tightened up a bit, but its incredibly rewarding mystery-solving makes it a stellar investigation game that succeeds at such a naturally mystifying genre where many others fail.