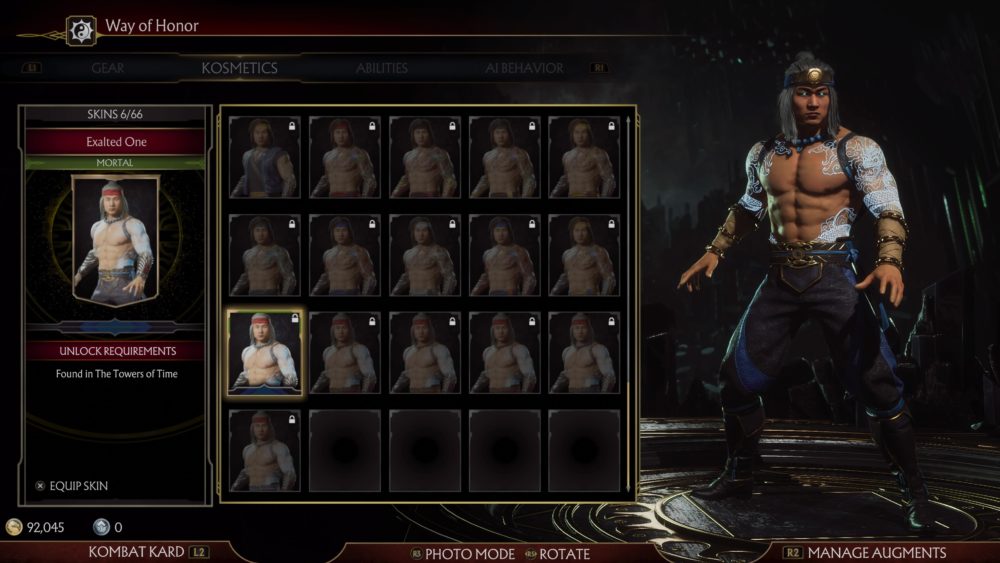 Liu Kang sports a number of different looks throughout the story mode of Mortal Kombat 11. One skin that you’re probably interested in considering you ended up specifically onto this page is the Fire God Liu Kang Skin. Here’s how to get it.

It should be noted that there’s no skin in Mortal Kombat 11 that’s explicitly called Fire God Liu Kang. Rather, there’s a number of different skins (six of them as of this writing) that look very similar to that specific look from the story mode.

The only one that has a location that can be confirmed with any certainty is Exalted One. You have a chance of getting this version of Fire God Liu Kang by completing Towers of Time objectives.

What you need to do is complete all 30 of Liu Kang’s Tower of Time gauntlet objectives. It’s a lot of hard work but you’ll be rewarded properly with one of the most exclusive Liu Kang skins in the game.

Other than that, the other skins are shrouded in mystery. There’s a chance that they could appear for sale using Time Krystals in the premium shop.

Try to go for Towers that feature Liu Kang in some way to give yourself a better opportunity of receiving rewards that are themed around him. There’s also a chance that the skin could straight up be listed directly, eliminating the need to rely on RNG.

Or, after a few runs of the Krypt, maybe you’ll come across it. If you do, let us know in the comments as we’re still searching ourselves.

Again though, if you want a Fire God Liu Kang skin, right now your best bet is to head to Towers of Time and start getting to work clearing them out and hope you get lucky.

They can be quite tough, our advice is to save your consumables for fights that you absolustely need them, like boss fights at the top of the tower which have more health than normal battles.

That’s it for how to get Fire God Liu Kang skin in Mortal Kombat 11. For more tips and tricks, check out our wiki guide, and read our review for our full thoughts.