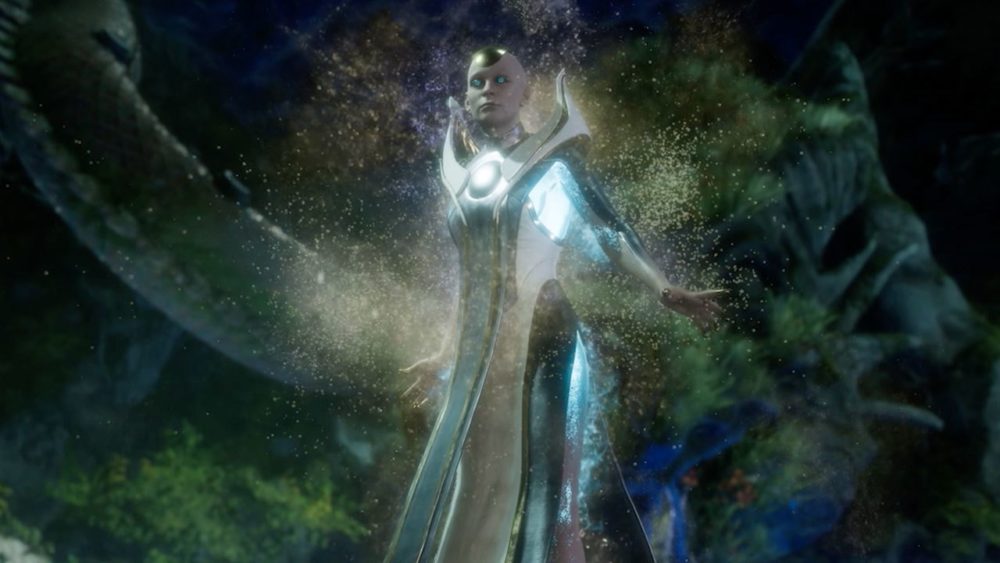 Kronika is the newest big baddy in the Mortal Kombat universe. She is the mother of Cetrion and Shinnok, she has the power to control time and she really does not like Raiden. To be fair, you probably wouldn’t like someone who beheaded your son either. She’s quite the tough cookie so here are our tips for how to beat Kronika in Mortal Kombat 11 (MK 11).

Tips For How to Beat Kronika in MK 11

Kronika has a lot of things going on for her that make her particularly difficult to battle. She doesn’t take a whole lot of damage, and she will innately block certain special moves such as Liu Kang’s bicycle kick and fatal blows.

So you can’t rely on getting a huge chunk of damage done that way.

Also, mid-battle, Kronika will summon another character to fight in her stead. This character has a lot less health than normal, but still, it effectively raises her total health even higher, and gives you an extra opportunity to screw up and take more damage.

Finally, she has crazy time-bending moves that are extremely difficult to react quick enough to. If she lands any move on you, expect to get pulled into a long Kombo that ends with you taking a ton of damage.

So how do you beat Kronika in MK 11 then? You need to go back to ol’ reliable, the same strategy that helped you beat the likes of Shao Khan and Goro back in the Genesis days: spam the crap out of her.

You need to constantly stay on the offensive as much as humanly possible to stand a chance versus Kronika. Your heavy special attacks aren’t cost-effective and if she blocks it, you’re pretty screwed.

Instead use light, quick, easily recoverable Kombos to keep her stunned and unable to use her cheap special moves. If you can’t do Kombos reliably, at least spam some punches and kicks, do a little button mashing like we all did in the olden days.

The key basically is to keep Kronika from attacking, and keep the pressure on her.

Don’t try and run away or keep your distance because she is like MK 11’s version of Liam Neeson in Taken, Kronika will find you and she will kill you. The only way you’re going to beat Kronika in MK 11 is if you take the fight to her.

When the phase switches to her summoning another character, this is when you should burn all of your amplified special attacks and Fatal Blow (if applicable) as much as possible to just get them the hell out of the way ASAP.

If you’re using Liu Kang let’s say, for example, nailing a double amplified bicycle kick will do over 50% damage to one of these goons.

When Kronika reappears, continue the flurry of punches. Although it’s hard, do try your best to block as many attacks as possible (obviously).

You shouldn’t continue an attack knowing you’re going to get hit, if you see an attack being telegraphed, stop what you’re doing and dodge/block, then get back in Kronika’s face and keep going.

Ultimately that’s really the best tips we can give you. Ultimately beating Kronika comes down to “gitting gud” and it’s meant to be an ultimate test of your skills in MK 11.

If you’re really having a hard time still, go to the Tutorial make sure you know all the advanced tricks in general and for your character, and make sure to practice all your Kombos.

That’s it for how to beat Kronika in MK 11. For more tips and tricks, be sure to check out our wiki guide for Mortal Kombat 11 and read our fully scored review.