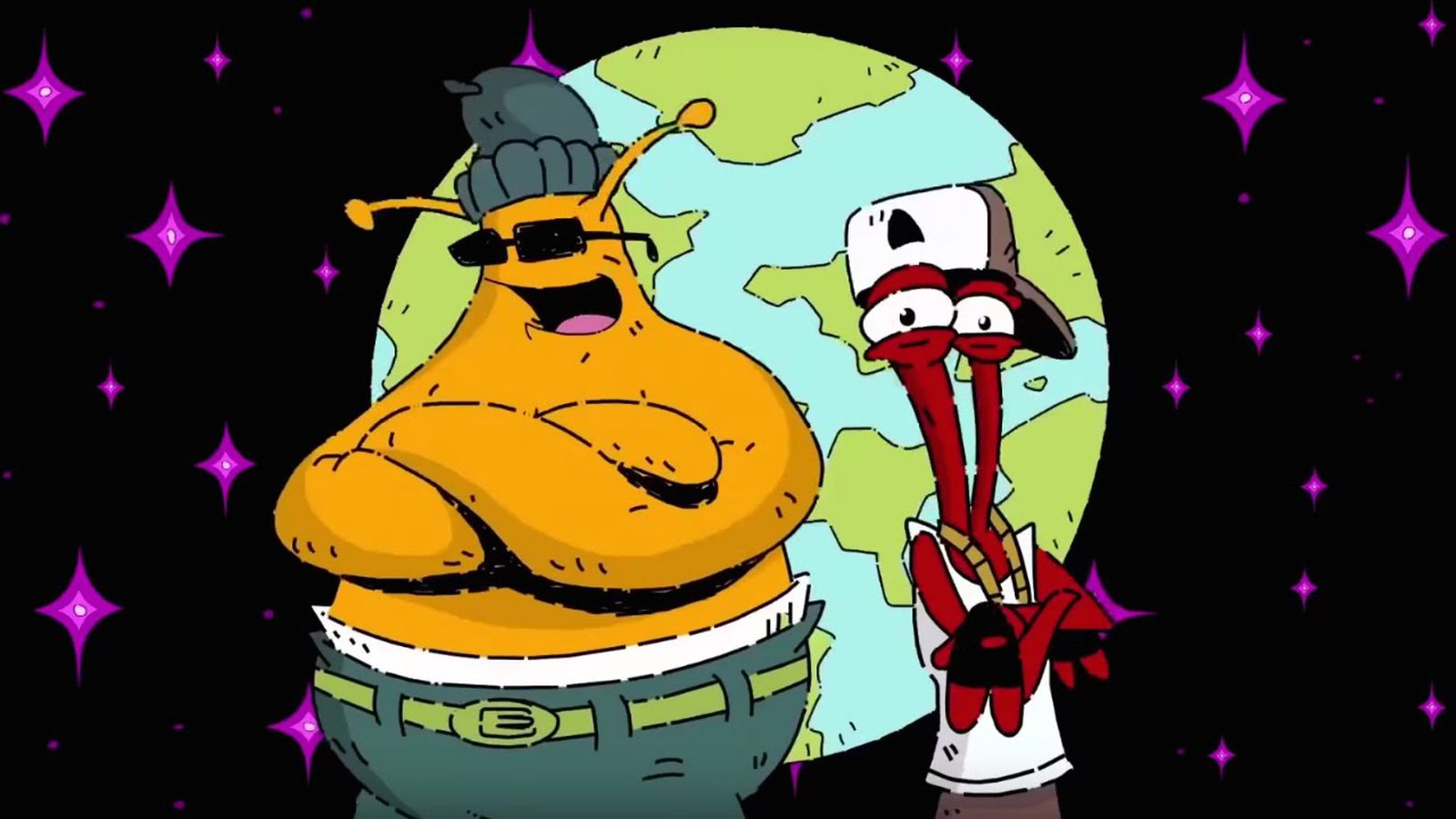 ToeJam & Earl: Back in the Groove on Nintendo Switch

Back in the early days of the Sega Genesis, Sonic the Hedgehog wasn’t the only one who was making some noise and pulling the attention away from the powerhouse that was Nintendo.

ToeJam & Earl came out of nowhere when it landed in 1991, oozing irreverent style that made it quite unlike anything else. Centered around the two titular aliens, it was a rogue-like action game that saw either one or two players scouring the map for the pieces of their broken ship.

Along the way, the characters could collect presents with randomly generated items that would either help or hinder them, while trying to fend off eccentric hordes of earthlings, like a woman pushing a shopping trolley, or a phantom ice cream truck that brings a great deal of pain, and very little ice cream.

It was a sleeper hit, and more sequels hit the shelves over the years to mixed reactions, with the last being 2002’s Mission to Earth on the original Xbox.

By most expectations, ToeJam & Earl had slipped into the ether, victims to the cruel fickleness of the shifting video game landscape.

That’s why it was such a shock when co-creator Greg Johnson revealed the Kickstarter for the fourth entry in the series, and after the requisite multi-year wait that comes with any indie announcement, we’re finally here, with those lovable misfits grooving onscreen again at long last.

The game is very much a re-imagining of the first title in the series, as players explore levels, collect presents, and seek out elevators to take them up to higher stages. If you’ve played the first one, you’ll instantly know what to expect, and if you haven’t, it won’t take you too long to work it all out.

There are three types of gameplay: the tutorial world, which offers hints along the way to get you accustomed, the fixed world, where stages will be more or less the same each time you play, or the purists’ favorite: random world, where the maps will be completely different, and you’re at the mercy of the RNG gods.

To get the most TJ&E experience, you’ll want to unlock the madness of the random world option. However, be prepared to occasionally be left in a situation where your goals are left unclear as you attempt to navigate the stage, or one of the 10 ship pieces you need to find will just be sitting right there at the beginning.

There are nine different characters to choose from (three unlockable), each with their own strengths and weaknesses. To borrow a phrase from Earth Angel, “Earl be big and bad,” but ToeJam is the speedier of the two. You can also select the homegirls Latisha and Lewanda, or even throwback ‘old skool’ versions of the starring duo.

As you may expect, the latter two are the characters most typically found online.

You’ll amass XP along the way by unveiling more of the map, using presents, defeating enemies and generally scoping out your surroundings. Get enough XP, and you can gain promotions to boost your stats, whether it’s your foot speed, your health, or your ability to seek out hidden items. For this reason, it’s best not to try and barrel straight for the elevator as soon as possible.

Though Back in the Groove is in every way a tribute to the first ToeJam & Earl game, fans of Panic On Funkotron and Mission to Earth will also get a kick out of some of the returning characters and concepts from those titles.

Whether it’s the eerie cow ghost and the naked man in a cardboard box, or the pencil-brandishing yetis and medusa babies, it’s clear that the series as a whole was treated with reverence, and they all fit seamlessly with one another.

Seriously, in what game should I be excited that the ability to shake trees returned? I guess I’m just weird like that. Or funky.

Speaking of which, the mini-games take a major cue from the second TJ&E fracas, as you’ll be frequently visiting the Hyperfunk Zone, a 2D endless runner where you have to press the button at the correct time to dodge walls and exits, while collecting XP, money, and clocks to extend the timer.

In addition, your alien buddies will occasionally visit via hologram to challenge you to a timing-based dance-off. It’s simple, but it helps break up the proceedings, and it’s another familiar callback sure to put a smile on the faces of old Genesis fans.

All of the characters and enemies are quite charming and unique, and they’ll occasionally trade subtitled banter with one another. I legitimately laughed at the interaction:

However, one of the biggest issues I found with Back in the Groove is that the maps can get excessively busy. Beyond just enemies, there is often too much happening on the screen at one time, whether it’s items to collect, buttons to press, coin meters to interact with, trees to shake, the list goes on and on.

The original title often had a lot going on, but it never felt quite so cluttered. Eventually, you can begin to tire of all of the nonsense, simply opting to plow your way through and avoid everything, which is a shame. It’s meant to be a marathon, not a sprint, but it’s a marathon that could potentially benefit from a little scaling back.

As always, TJ&E is at its best when it is played in tandem. Not only does it make the combat and exploration easier to manage, but half the fun comes from using unidentified presents out of desperation, and either hitting a jackpot with a crucial item, or inadvertently bringing the downfall of the entire squad.

You can jump in and out of sessions online, and the experience is fairly smooth, though occasional bouts of lag can leave you in precarious situations. Amusingly, you can opt to join a game that has progressed to one of the latter stages, and that can be absolutely jarring if you’re unfamiliar with what to expect.

As you begin at the lowest promotion and are suddenly facing off against the strongest enemies, you’re liable to get absolutely crushed, leaving you to just seek out the elevator and let your cohorts do the work. In doing this, you can sleazily ride off their coattails until the end, allowing you to complete the game and nab the free unlockables.

Thankfully, Back in the Groove supports local co-op, and if you’re looking for the truest example of how this game was meant to be played, this is probably it. Call me a purist, but nothing beats elbowing your friend when they make a boneheaded mistake, or shrieking in unison as one of you manages to awaken the insane dentist.

Ultimately, the question at the end of the day will be whether this game does enough to a) appease fans who want a nostalgia kick, but a little bit more as well, and b) entice newcomers to see what all of the fuss is about.

Overall, TJ&E aficionados are likely to be pleased with the product. It delivered on everything it promised, peppered in enough new elements to keep things fresh, and brought back the multiplayer mayhem the series is famous for.

As to whether the decidedly un-funky will be quite so delighted, Back in the Groove may not quite hit its mark. The original game was incredibly ahead of its time, but now that we’ve seen all kinds of roguelike dungeon crawlers since then come and go, the formula here feels like exactly what it is: something from almost three decades ago.

It can be tons of fun if you’re in the mood for what it offers, but in an oversaturated market, it doesn’t entirely stand out.

In fairness, though, it’s never trying to be something that it’s not, and that was one of the biggest criticisms the last two games had received. It’s a TJ&E reboot done faithfully, and that’s all we were ever asking for.

It has the unlockables and online functionality of its modern contemporaries, while sticking to its roots and showing us that a good game can still be a good game, even after all these years.

If you don’t like it, then hey — guess you can go get funked.