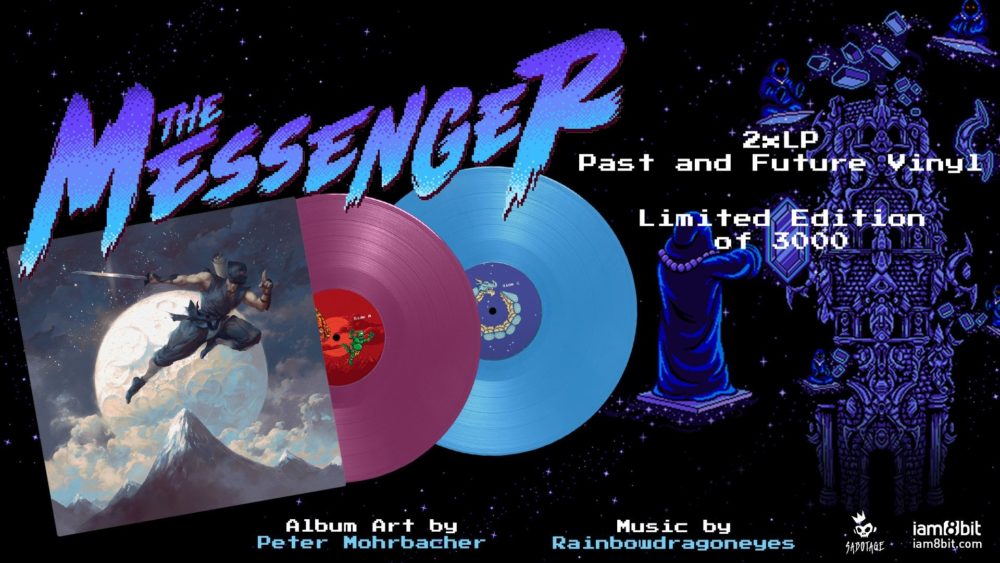 iam8bit has announced that they will be releasing the soundtrack for The Messenger as a limited edition 2-LP collection. The online store is already taking pre-orders for the vinyl set, and fans should act quickly as only 3000 copies will be produced.

Those who purchase the limited edition soundtrack will receive the Past and Future LPs featuring music by Rainbowdragoneyes, an album sleeve with art by Peter Mohrbacher, and a digital download code for all of the tracks.

The store page on iam8bit provides the following description for the collection:

“The soundtrack to The Messenger is a rare gem prophesied in ancient scrolls. It’s a cathartic odyssey through mythology and mayhem, as imagined through the earholes of a prolific madman named Rainbowdragoneyes. This 2xLP represents the duality of the game’s narrative and it’s split-personality as an album. The first disc oozes with 8-bit NES-talgia, while the second disc journeys us into the 16-bit future. These are two distinct soundtracks borne of different eras, yet bonded by ninja sweat and demon blood. They are ambitious, addictive and totally fucking awesome.”

Fans of The Messenger now have plenty to look forward to this year as the vinyl set comes on the heels of the announcement for the Picnic Panic expansion. The DLC will be released later this year and will be free to all owners of the base game.

You can find the iam8bit page for the soundtrack here. The collection is set to ship out to those who pre-order sometime in Q2 of 2019. For more on The Messenger, you can check out our review of the game and our coverage of the Picnic Panic expansion.

The Messenger is available now on PC, Switch, and PS4.