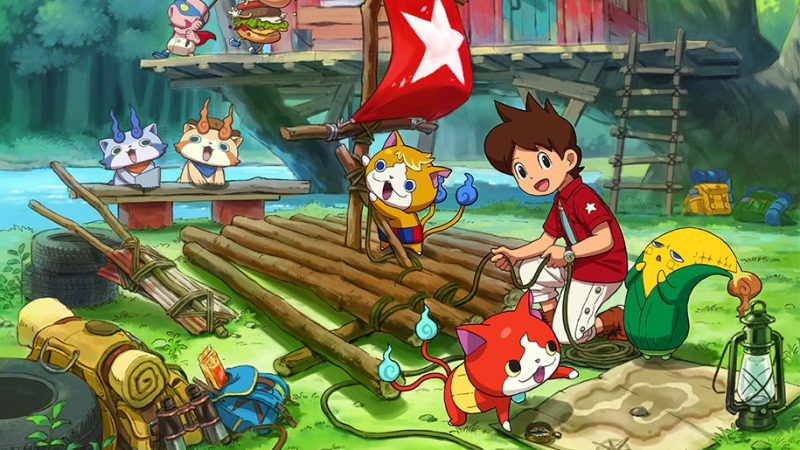 Yo-Kai Watch 3 strikes a balance that most other sequels struggle to achieve. Even with a few noticeable flaws early on, it manages to push the series forward for old fans while also providing plenty of reasons for new fans to jump in.

Set after the events of the first two games, Yo-Kai Watch 3 sees the protagonist Nate move from Springdale to the city of St. Peanutsburg when his father is transferred for work.

It’s not long after that he learns his new home town is inhabited by ‘Merican Yo-Kai, and after receiving a new model of the Yo-Kai Watch, he sets out to help the Yo-Kai and townspeople alike with their daily troubles.

Meanwhile, back in Springdale, a new protagonist named Hailey acquires her own Yo-Kai Watch. With it, she encounters and befriends the Yo-Kai Usapyon, a spirit out to find Dr. Hughly, his past owner and friend, who has mysteriously vanished.

As they search for him, the two decide to open a detective agency, aiding anyone who comes their way with a supernatural dilemma. All the while, the two main characters are drawn further into a mysterious event with extraterrestrial origins that will require both of their skills to remedy.

It’s a decent enough concept with plenty of set-up and payoff found throughout the adventures presented, and switching between two protagonists’ stories at once is a fresh new addition to the game that pays off more often than not.

However, as a result, it also takes a while to lay everything out and get players into the actual game. Between getting through tutorials, the story setup and swapping between the two main characters to establish the setting each will explore, it can take up to four hours to finally dive into the game proper.

It’s a pretty glaring flaw, and getting past this early hurdle can be a slog. Fortunately, the story does start to shine through after the first few hours, offering enough twists and turns as it progresses to make it an enjoyable addition to the title’s gameplay.

Speaking of which, Yo-Kai Watch 3’s gameplay is definitely its biggest draw. As either of the two main characters, players can amass a team of friendly Yo-Kai to help them deal with their town’s more malevolent spirits in combat.

Each Yo-Kai has its own traits, alignments and pun-tastic personalities they lend to combat, and based on where they’re positioned on a 3-by-3 battle grid, players can increase or decrease their effectiveness in combat accordingly.

The more they’re used, the stronger the player’s Yo-Kai become. Once they’re strong enough, the player can then use them to take on special quests and bosses to progress further into the game’s world.

It’s pretty standard JPRG fare, but like with Pokémon or other party member collect-a-thon titles, it can be a blast to train up your favorite spirits until they overcome a challenging foe.

It’s all the better when that foe joins your party, and you can use the abilities that once gave you headaches to take down the next formidable adversary.

Admittedly, Yo-Kai Watch 3 can have some odd or unexpected spikes in difficulty, either from a random encounter or a boss that seems oddly overpowered even after grinding for a few hours.

Yet, for the majority of the time players spend fighting and training up their Yo-Kai, there’s a regular sense of progression and accomplishment that makes it hard to put down.

Seeing a Yo-Kai you trained up from nothing take out a particularly hard boss, or even the end-game enemies, is endlessly entertaining no matter how many times you see it, and can lead to more than a few replays for those it strikes a chord with.

This is only bolstered by the wealth of activities available outside of combat. There are collectibles to gather, treasures to hunt down and quests to complete aplenty, each offering their own rewards to earn and quirky sub-plots to see.

Doing so will also contribute to the Yo-Kai collecting and training that make up the bulk of the game, granting the player’s selected Yo-Kai team with more experience and better equipment to increase their chances of overcoming powerful enemies. Add in a serviceable enough soundtrack and the series’ trademark art style, and you’ve got an experience that’s hard to put down once you start playing it.

For all of its problems in the first few hours, Yo-Kai Watch 3 turns itself around wonderfully for an experience most any player can enjoy. Its a great entry for fans new and old, and an indicator of the greater heights the series is headed toward.